Tuesday 4.30pm Dull grey sky and steady rain this afternoon. Wind consistently 20-22kt from NW - giving good boat speed of 6-7.5kt - with occasional surfing on waves to over 8kt for just a short while! Feeling very cool at 17C/62F. We're skirting a large High pressure area on its SW edge - but likely tomorrow to be overtaken by the centre of the High dropping over us - will give light winds, maybe headwinds... Seas also pretty constant at about 3m/10ft from NNW.

9pm Well, the High is spreading over us - wind has slowly died down to 14kt since darkness fell and has backed to WNW. Just had to gybe around to avoid heading due East! Very moist air with droplets of moisture caught in the beam of my headlamp - an essential item for night-time sail handling. We're now on a broad reach on starboard tack - so still sailing downwind.

Wednesday 4am Around dawn - saw a thin streak of pink half an hour ago but all a dull solid grey cloud layer now. Very wet everywhere on deck but not raining
Sheeting in on starboard tack a short while ago seemed good - got us heading SE instead of NE - but wind continued to back further, and died right down to 8kt, so we soon ended up heading E. So we tacked around onto port tack, expecting wind to back further at some point (soon hopefully!), so we'll then head SW and, finally, S or maybe even SE...! Not much that can be done to head in a better direction - the High has moved over to right on top of us and we just have to wait to see where the wind comes from and adjust accordingly.

5am I hate going backwards! Decided to heave to so we can drift more to E, maybe even ESE or better, rather than head W at 3.5kt as we were...! Playing a waiting game while High moves to wherever it's going and we can sensibly get under way again.... Wind is from due S just now...

Twice I went on deck to look for a ship nearby - convinced I could hear the low hum of engines - but nothing there. It's the humming of the rigging in the wind!!

6am Added topping lift to boom end. Then raised boom more with topping lift using another line to winch with a rolling hitch so I could cleat off the topping lift when boom raised more - not much but taking it off the bimini metalwork. The rod-kicker gas-filled rod is clearly not doing its job of pushing on the boom to raise it up when the kicker/vang is released - the boom was held rather loosely.
We're drifting SE at 1.2kt - at least that's in a better direction...

Later: Wind SE now - we're drifting East now so not too bad. Waiting for wind to back into a better direction to move away. 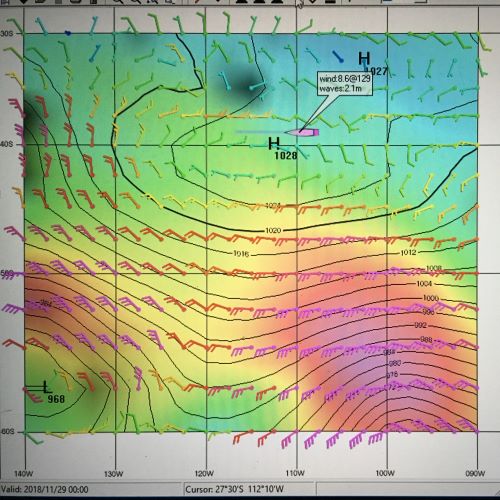