Thursday 0045GMT Midday, the sun came out for a time and a small blue patch of sky was seen - but it didn't last long. Now, it's very dull and light is beginning to fade a touch. It feels much later than 4pm PST. We just passed E of 108 W but we moved into a new time zone on passing 112.5 W - we're now one hour ahead of PST - into Mountain Time in N.America - no wonder it feels late! I'm going to change my timing into LT - Local Time. So my present local time is GMT-7 ... until we reach 97.5 W.

There's the usual overcast grey sky and very lumpy seas - we were being thrown around a lot on a close reach, banging into the seas quite a bit and the seas have been frequently washing over the decks and even over the hard top, into the cockpit. Wind has backed into NE and increased at times from 18kt to 21kt and still backing, so I changed course slightly relative to the wind - adjusted Fred to head more off the wind (nearly on a beam reach now) and eased the sheets. Also furled in some more genoa. We're still making over 6kt.

Time to start cooking before the light goes completely... cheese and onion omelette tonight. I couldn't do it without my bumstrap in these conditions....

8pm LT Enjoyed my omelette! Amazing the difference bearing away, more off the wind, makes... Suddenly. things are a lot smoother and it's a lot quieter! Still getting thrown around occasionally by a big wave hitting the boat and still having to be very careful moving around - but you can sense a big wave as it starts arriving, to get ready and hold on tight as the boat lifts up.

Friday 6am LT Sunrise was around 5am - hidden by grey cloud and rain. So much smoother a ride heading downwind, as we are now. Making good speed, ~ 6.5kt, but slightly to east of preferred course. No problem, since we'll be needing to gybe around later today if the wind backs further, as forecast, and then we'll get back on course. Wind from NNW at 20-22 kt. Murky, misty in frequent rain.

11am Just finished my morning (fresh-brewed!) coffee after gybing on to starboard tack - course towards Cape Horn is very good now. (It was feeling relatively smooth enough to risk putting on the coffee pot while I was close by, getting my breakfast - managed without any spills - lovely!) We had been finally heading ESE in NW wind just before gybing around - I'd been waiting for the wind to back sufficiently before changing tack. We'll be mainly on this tack for quite a time now, with just occasional adjustment of Fred needed if a Front comes through to change the wind direction to SW from NW. Meant changing my sleeping bag over to the other side of the cabin - the lee side of 'Nereida' is now the port side... That's where I'm sitting now, to write this in comfort.

Took photos (by request!) of the seascape yesterday afternoon, trying to show the rough seas - they never look as dramatic as in reality! Also noticed I'd forgotten to post a lovely sunset on Wednesday evening when I was down below and the whole cabin was lit up with the orange light coming through the clear companionway washboard. Caught my attention and I went up on deck to enjoy it - don't often see the sun these days. The best that happens is the cloud layer occasionally gets a lot brighter - but the sun rarely shines through completely. (Solar power coming in pretty well, despite that.) 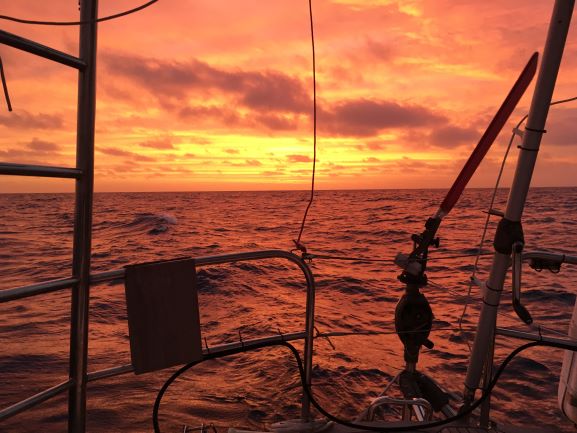 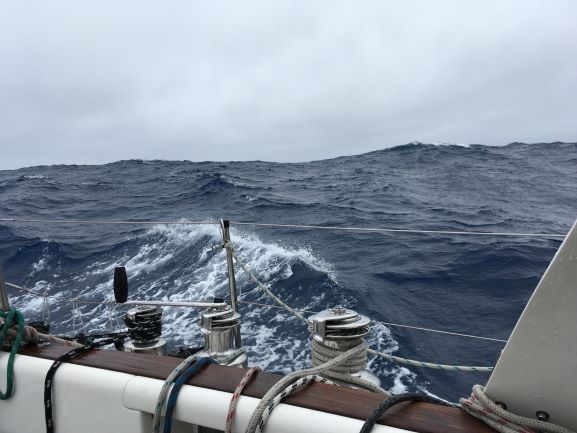 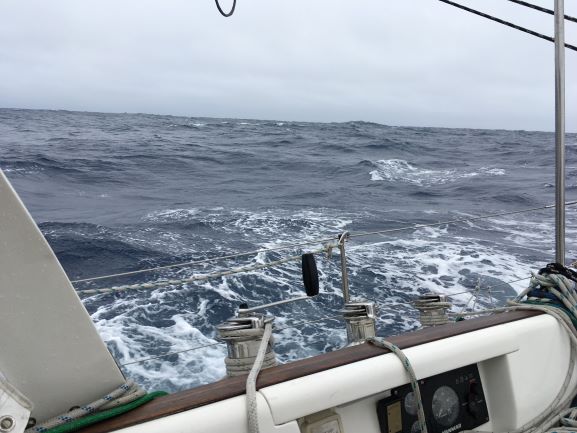