Thursday 11.30pm Just got down below - soaking wet on top. Apart from my usual overtrousers, hadn't dressed for rain - and there was plenty over the final few hours!

I think I must have started around 3:30pm LT, soon after finishing a 2100Z radio sched. All took a long time - well into darkness hours but fortunately it didn't get completely dark, despite total overcast (moon shining above the cloud layer?), so I was able to keep on working without stopping to get a head lamp.

The plan for getting the genoa (big headsail) out of the sea worked well but there was a lot of work involved to keep in place as much of the sail that was already on deck. Too much of an effort had been made to lose it into the sea now. Firstly, I had to undo a lot of my original lashing to lift the clew and tack of the sail to lead them under the lifelines, so the entire foot of the sail could be brought in under the lifelines.

Once I was satisfied that the sail could be brought in without being tangled, I had to tie a line tightly around the sail that was dangling over the port toerail down into the sea and attach to it another line leading first across the foredeck to a block on the starbosrd rail, from where the line lead back to the cockpit genoa winch through a jammer. Workng with the motion of the boat in the swell, I then winched the sail up until it met the foredeck block. Lash the sail securely in place, take it off the winch line, tie another line around the sail by the port rail, attach the winch line, winch in again....each step involving trips to and from the cockpit either to the winch or to the jammer. It was probably good that the sail was wet and it slowly began to rain - probably helped reduce friction/chafe on the sail. It was great to see, from the start, the sail coming up and moving across the foredeck as it did so...Yippee!!!

Eventually, I was able to lift the head of the sail by hand onto the deck but then needed to release it from the forestay to get it under the lifelines also (the head of the sail had been held securely by the halyard all this time). Without my marlin spike, it was difficult to turn the shackle pin, even with the pliers I'd brought to undo the mousing wire holding in place the pin of the foot shackle. I eventually managed that one but failed to move the pin on the halyard shackle. I never feel too safe with one arm around the forestay, holding me in place, and the other hand trying to work high up - in this case, on the shackles holding either the head of the sail or its halyard- especially with a big swell running... So, reluctantly, I've tied off the halyard to the pulpit for the time being. It was getting dark and I can have another go in calmer conditions.

Next job was to lash the sail safely to the side deck - I used a pole stowed on deck and lashed it to that - another time-consuming job since, with seas washing the deck regularly, it had to be done really well - luckily, I've lots of line on board!

Once finished with lashing the sail (a major job in itself, the sail is so big - it had to be doubled and then doubled again), I had to get us sailing - a Low was forecast in a day or so and if we could get SE it was likely to pass well to the N of us. Gybing around and then adjusting Fred for a broad reach went fine - except that the wind got shifty so it took several trips, still in my wet clothing, to get Fred adjusted right. Had to change out of all my upper clothes - soaking wet. The problem with rain is water getting up the sleeves when hands are raised even slightly - seems to be mostly unavoidable

Very tired now - started just after 3pm, ended about 11.30pm - having a hot chunky beef and vegetable soup/stew, warmed up straight out of a can, and getting to sleep.

Great to be underway and brilliant that the plan worked - thanks so much, Robert!

Friday Pleased to hear Susie rescued safely - ETA just before Christmas in Puerto Madryn, Argentina, it seems... I've heard it's quite a nice place!
I slept and slept.... apart from occasional course adjustments when needed. Eventually got up for this report's timing - had a (very!) late breakfast, checked emails, wrote this... Delighted to find a bright blue sky and lots of sunshine - trying to dry clothes.
Wind is W-WNW 20kt - more than forecast but that's fine. We're sailing well, but a bit slowly, under reefed mainsail and staysail on a broad reach in 4m swell, at 7sec - a bit rolly but not too bad.
I'm keeping my fingers firmly crossed - weather is looking good for getting to the Horn - It would be great to have a pleasant rounding without any overly-strong conditions.... Time will tell. 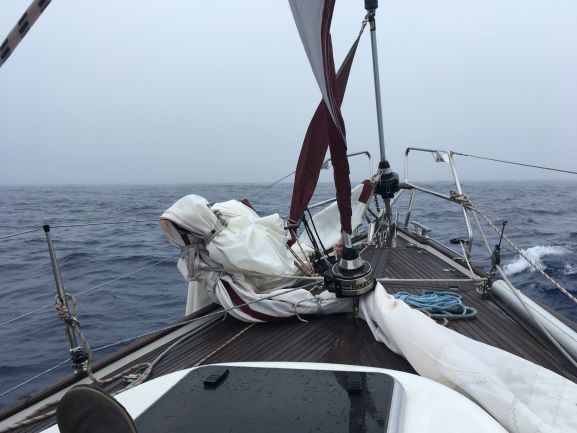 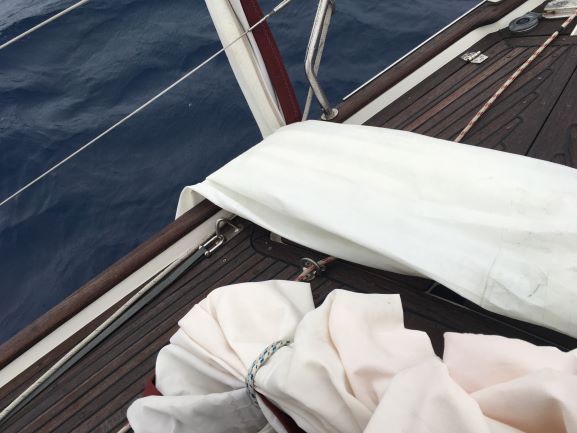 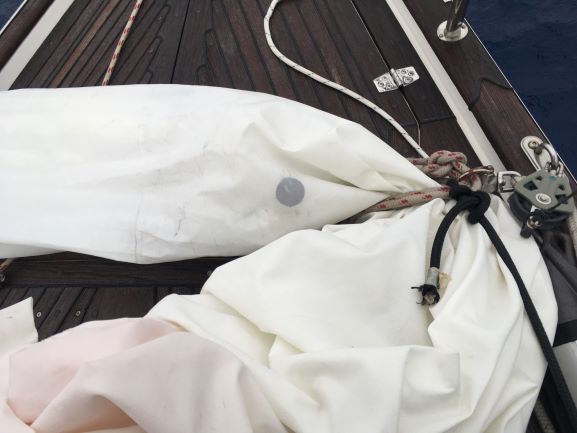