Sunday 3:45pm Wind is beginning very slowly to veer towards the W, as opposed to being from due S, so our course is now ESE, rather than almost due E - good! But still very slow because I don't want to head N so we're very close-hauled trying to head more S than E - never a very efficient point of sail.

I forgot to mention my latest problem - the third reef line clutch has broken - there's a spring missing and a metal part is sticking out - so I've had to abandon using that clutch for the third reef. Fortunately, I can move a couple of other lines (mainsail outhaul and pole downhaul) around to use one of their clutches for the third reef line - essential to have the third reef line through a working clutch and the mainsail outhaul already has a jammer at the forward boom end which is working fine. I'm going on deck now to see about the pole downhaul line on the starboard side (one of the lines involved) - it would be good if I could disentangle it from my lashed genoa on the side deck.

It's getting brighter - rain has stopped and the sun is trying to get out.

5:30pm LT Been busy on deck for quite a time - stowing staysail pole after re-running the third reef line to a good clutch. That meant re-running several other lines - including the starboard pole downhaul which, happily, slipped out easily from the lashed genoa on deck - one less problem to sort out.
Wind has veered to just W of S - so we're finally making a good course towards Cape Horn. Wind from 196T (SSW) at 17kt and we're making 5.4kt under staysail and reefed main. I'm loathe to run too big a mainsail with the small staysail since my concern is that it will unbalance the boat and give Fred a problem steering if we keep trying to round up, as is likely. Will keep our speed down so I'll have to experiment but it's nice to be underway again in the right direction!

The wind is forecast to continue veering so I'll have to keep adjusting Fred to make sure we stay on course.

Nice to see the sunshine again - there are small patches of blue among the grey clouds. Pressure is slightly up - 988hPa now, from the 986hPa earlier, so seems the Low pressure system is moving off to the East now.

Time for a mug of tea and to organise tonight's meal before the light goes.

11pm Back down below - wet from waves washing over the deck - and onto me... hatless but otherwise protected - ended up with a salt water 'hairwash'. Tied in third reef for overnight, with wind up and down around 25kt. Seas well up and throwing us around all the time. Also took a time correcting our course - wind was gusty and shifted around to begin with, under rainclouds.

Lovely crescent moon earlier and bright stars now. Light lingered as a line over the W horizon for a very long time after a lovely sunset in a clearing sky.

Missed my 7160 'sched' completely - boat has to take priority - especially for overnight safety in strong conditions. Apologies to those who hoped to meet me there - another night!

Monday 4am Spoke to Peter, ZL1PWM, at 2am and he repeated a weather warning of possibility of a nasty system expected in Cape Horn area at the exact same time as I was expecting to be there late next weekend: Sun/Mon. 50-60kt winds and 8m swell with 10sec period - very unpleasant and likely to be dangerous...
Discussed my options - very limited, except that if we were to continue on SE, we could not avoid that big system - so best to stay near to 50S. I don't want to get much closer to Chile coast by heading E so my only sensible option is to heave to - now done.

Will stay here, drifting a little, until weather outlook shows it to be clearly safe to move on. Uku on 'One and All' had the same warning - he's likely to round the Cape when I do.

Midday We're constantly pitching and tossing with the swell under a brighter sky than earlier, with just the occasional wave tumbling as it hits us and makes a crashing sound - but not badly so. The sun is managing to get out often now, in the gaps between clouds in a layer of cirrus. It's cold - 10C sea water and outside air temperature, with the main cabin only one or two degrees higher - fleeces and my nice warm hat essential. The only way to dry wetted clothing is by body heat - so most stay damp. Several items are hanging up on my 'washing lines' in the main cabin, but once they've dripped any excess water, they just stay permanently very damp, if not wet.

The wind, consistently around 20kt all morning, has veered from the SW of earlier to just N of W now. We drift in a direction dependent on the wind direction - previously ESE, now due S, but only at about 1 kt, so we're not going very far in a day!

(2pm Had to add this in before posting...! Went up on deck to check swell direction and cloud cover - ended up tidying lines in cockpit, saw grey and white bird swooping nearby (shearwater or prion?) and then another, very dark, bird (petrel?) - but then, along came a Wandering albatross - magnificent! Shortly afterwards, a juvenile came close - they're clearly parent and young - now resting in the sea close to Nereida - so difficult to take decent photos in such big swell and with the boat pitching and tossing - I tried, but.... (photos tomorrow, hopefully) 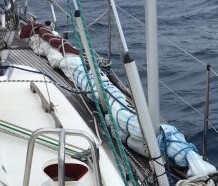