Saturday 4:30pm Was just enjoying seeing some sun and bits of blue sky when a big dark raincloud came over and the wind gusted up to 24kt from 15-17kt - rain! Wind was soon back down - to SW 17kt - and then back up to 24kt with another shower... down again ...and then up to 30kt under another cloud - coming and going so quickly.... Blue sky still visible around the edges of each dark grey, angry-looking cloud with some sunshine in between the heavy showers. The wind makes a very distinctive sound in the rigging - a musical moaning noise.... When it arrives, I can pretty well guage the wind strength from its sound.

A pair of white-chinned petrels, around most of the day, were joined by a small flock of Antarctic Prions - quite small birds, swooping around close to the water nearby, staying together as a group. Occasionally, I'm also seeing a solitary Black-browed albatross - quite distinctive from the much larger Wandering albatross seen the other day with its young one.

Pity Uku on 'One and All' didn't head SE to begin with last night, well before the wind went from WNW to SSW - he might then have made his proposed 'photo shoot' rendez-vous with 'Nereida'... The last time we met was quite a few years ago, in Simon's Town, S. Africa - a small group of single-handed cruisers got together at the False Bay Y.C. there, near Christmas, after sailing S from Richards Bay - the usual landfall at the end of the Indian Ocean crossing from Australia.

We'll have to make do with radio contact, either tonight, after the Pacific Seafarers' Net, or after his daily weather update from Peter, ZL1PWM, around dawn tomorrow. Propagation on 40m overnight is excellent just now. I made contact last night again, on 7160 soon after 0400Z, with two radio operators in Chile - I enjoy that - makes me feel close to the people of the country I'm passing by.

8.30pm Close to sunset - but, although some breaks in the cloud, the sun is hidden. Seas are SW 4m, only very occasionally rocking the boat rather suddenly, literally! Today's tally of birds ia: pair of Black-browed albatross, pair of white-chinned petrels and a small flock of prions - all seen from time to time throughout the day - I wonder if they've 'adopted' Nereida' - I hope to see them regularly from now on.
Getting a short rest before PacSeaNet at 10pm LT (=0300Z). Looks as though we'll be here at least until tomorrow afternoon, maybe not getting underway again until dawn Monday. Keeping a constant eye on the weather forecast for the Cape - it's a 3 day sail from here...

Sunday 4:35am LT/EST Just got underway ...unexpectedly! Spoke to Peter at 3:30am, after Uku's daily radio weather update ('One and All' is possibly only about 30 miles away) "Get underway now!" was the advice - weather warnings are diminishing and waiting longer is beginning to look less favourable... So we're heading now to Cape Horn - ETA in roughly 3 days - Wed 19th Dec.
Wind is SW 22kt, sky is overcast and grey (surprise!), seas are SW 4m/13ft or more.
Definitely time for breakfast and coffee... I'll make up on sleep later sometime...

6:45am Wind soon got up to 25kt or more - and then a big rain cloud came over - winds well over 30kt for a time... Rough conditions - 'boisterous' is, I think, the term used... 'gripping' is another - I was definitely gripping tightly as we regularly heeled right over in the bigger gusts! We were galloping along at around 7kt in seas made rougher by the wind... I was very pleased to see the edge of the cloud heading our way - and what looked like a raincloudless sky behind... Getting a hot soup, to be followed by some coffee and breakfast - still not had that yet.

8:10am Wind up to 34kt again under a rain cloud...boisterous conditions! The good news is they pass over quickly, boosting our speed as they do so....

8.30am Just plotted a hypothetical course from an assumed position to our NE for Uku at start of his passage towards the Horn. We're likely to be on converging courses, not too far apart - maybe 25 miles initially? I hope his AIS is transmitting - I'm keeping a careful eye on my AIS screen. We arranged to talk on SSB/HF at 1800Z/1pm LT so we can exchange position info then.
The sun has just come out and several prions are swooping about the boat, low over the water.
Think i'll get a short nap - I'm low on sleep hours at present....

1.30pm Had an excellent sleep! Woke to find sun shining brightly from between scattered white clouds and W wind 26-30kt giving us a good speed towards the Cape on a broad reach. Was hoping to chat to Uku over SSB/HF radio at 1pm - but had no contact on either frequency we'd arranged. Maybe he was busy just then... Should have had a good contact by ground wave. Was hoping to check on his rough position - hopefully, he's going faster than I am, although not by too much - to avoid possible strong gusts when getting closer, W of the Cape. My AIS is still not showing him and the VHF is silent. (I heard crackling yesterday when he tried calling.) 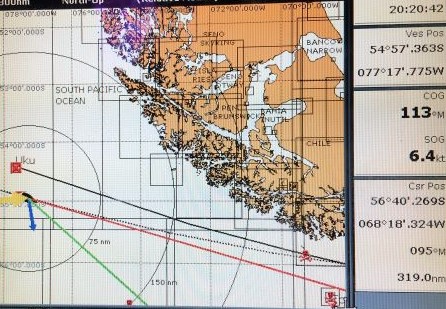