Tuesday 4pm Finished speaking to radio friends on 17m a short while ago - was great to hear Tom, N5TW - a continuing help to me on making good contact via Winlink for many of my emails and weather downloads. Many thanks, Tom!
I should also take the opportunity to thank, once again, Luis Soltero for loaning the use of the Aurora/Redport terminal with its Iridium connection giving GPS tracker and phone connection, as well as an email facility - enabling sending of photos with my daily reports. I've been making good use of both systems while on passage.

The sun is shining after a brief shower and I'm feeling very happy - a major problem I was convinced I had several hours ago has vanished into thin air! It looked as though a mast-climb was unavoidable... The mainsail seemed to have become entangled somehow at the first spreader - I thought the main halyard and third reef line, being both looser than they should, together with being on almost a dead run most of the time recently, were the cause of the problem, together with the strong winds and the tossing about of the boat by the angry seas over the last few days. It seemed I'd have to climb the mast and reach out to the end of the first spreader to cut the sail away where I thought it was trapped and damaged - I couldn't see us gybing after Cape Horn, as we'd need to, without the sail tearing if I didn't cut it free beforehand... I got into my climbing gear to check it out, also deck harness and gri-gri, thinking to plan well ahead of the calm conditions hoped for near the Cape ... Then went on deck to trim the staysail for a beam reach - the main had freed itself in the SSW wind and was looking fine... What a reprieve!!!

Having tea with chocolate brownies to celebrate - and then organising a nice meal in the present slightly calmer seas - still the occasional big one coming by to test my handholds...

8:30pm Went to let out 3rd reef in the far lighter, very pleasant, conditions - spotted the lazy running backstay block lying on the side deck with no shackle there to hold it in place... Without it, we couldn't change tack since the running backstay is a strong line that helps support the mast when the staysail is in use - which it is all the time now that the genoa cannot be used. Had to deal with that immediately - searched my spares and found three possible shackles - two of the pins were just a tad too big but the third fitted fine - I've 'moused' the pin in place. I'm sure I 'moused' all the shasckles on deck so I'm surprised this happened... Maybe I missed one or two? I'll be checking tomorrow in good light. Had just enough light around sunset to see well enough.

Took a photo of the group of islands ahead that include Isla Hornos - light is fading and I wanted a record of something close to the big event!

Wednesday 12.30am Cape Horn light seen flashing on the grey 'mound' that is Cape Horn on Isla Hornos - 9 miles off to NE. Seas have got up a bit with increased wind - appropriate, I feel!
Moon shining brightly between a few clouds. Still a lot of light in the western sky.
Can't relax until well past the Cape...
Thanks to so many of you who have sent good wishes for a safe passage past Cape Horn.

2:43am AST Wonderful to be passing the Cape finally! Unbelievably at this hour, there was a lot of light around - it never really got dark and now, well before dawn, the Cape was clear to see, with its white flashing light low down. Took lots of photos in hope that one or two might turn out well. Wind and seas suddenly got up, as I'd been warned they would, and we were making good speed at the time of passing. The wind was cold but that didn't matter, the moon was shining between clouds - there was even an early albatross flying by... The whole setting was exhilarating...

2.45am Took a long time gybing around in big seas after passing the Cape. Caught sight of a sailing boat approaching unexpectedly - hsd to change course to avoid it! Wondered if it was 'One and All' - but Uku had passed the Cape a few hours earlier - close to, I was amused to see. (He'd claimed he wasn't interested in passing near the Cape but I'd pointed out that his friends would like to see photos, if possible - so he clearly dcided to get close - probably having reasonable light, not the darkness he'd expected, helped his decision.) Wind was well up at 25-30kt so I had to reef down again before gybing... Lots to do! Very ready for some sleep...

Now making for E of Staten Island (Isla Estados) and will then head W of the shallow Burdwood Bank - with big swells expected, somewhere to keep clear of. I'm hoping not to get too much swell inshore of it. Then S of the Falklands, past E. Falkland, heading finally NE, aiming to get further from and on the N side of the many strong weather systems down here.

Greetings to the Royal Victoria Y.C. members gathering this evening to celebrate my Cape Horn rounding - I'm honoured that you should do so and will be with you in spirit - I'm hoping to join you in a celebratory 'Dark and Stormy'!! 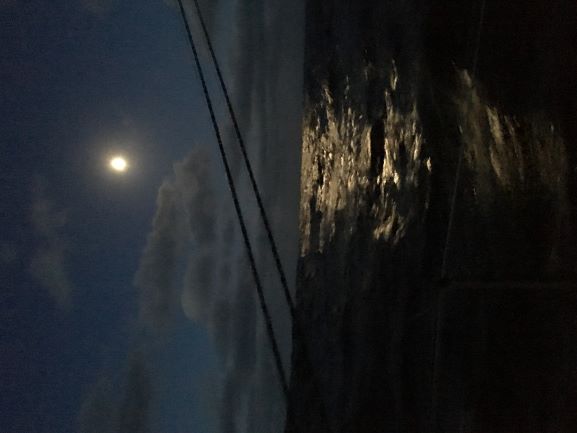 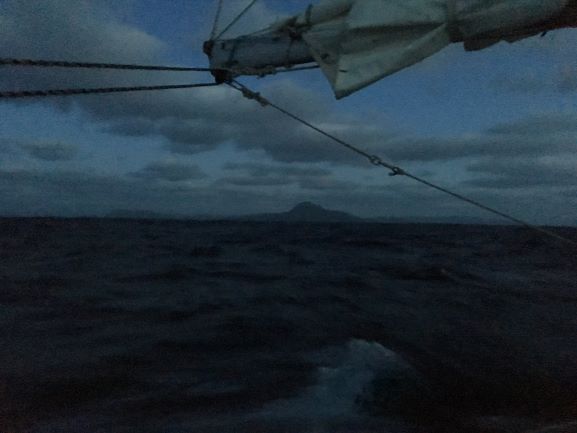