Friend Steve Pointon was 'Walking for the Wounded' today (Friday) - 26 miles from work to home. Hope you managed the walk OK with no big blisters this time, Steve, but plenty collected for wounded veterans! Well done!

Thursday 4:30pm A lovely sunny day following on from the big 'blow' just before 2pm - a lot of blue sky around with broken cirrus up above. Feels very quiet and serene, bouncing along gently for a change, in calm seas now.

Later: Wind died away totally - we just drifted around under a blue sky with birds for company, unable to steer in any given direction and with sails doing nothing except slat...
Gybed several times in an attempt to get us moving as the almost non-existent wind shifted around - to no avail... Very frustrating! Was later told it looked as though Fred was having a party!

Lovely sunset .... and a slight wind came up - but from the NE - exactly our planned heading.
I tried heading each possible way - either we could head W or SSE - neither were good. "... that was a nice looking triangle you drew on the Aurora tracker today. What was happening ?", a friend asked later.

By midnight, we were heading roughly on course, tight to the wind making aroud 2-3kt.

Friday 4am Up for radio with Ian, VK3MO, in Melbourne and Bob, VP8LP, in the Falklands who gave Uku his daily weather update for 'One and All' - pretty well the same for 'Nereida', we're still quite close and both now headed NE - or trying to!
NW wind had got up so we're making 6-7kt - and on course...!

7am Changed course to round Burdwood Bank - very shallow. I'd planned to avoid it in case of strong wind - which we're now getting - so I'm please my route planning has worked out well - it's bumpy enough, just now, without adding to the rough seas by crossing a shoal area for a minimum of 12 hours. Off to my bunk, now we're settled - will need to have a series of naps, in case wind shifts over next few hours.

10.40am Up again to trim mainsail and adjust Fred - mostly wind has been pretty consistent at F5, but has backed from NW to W. A gorgeous, sunny, but cold, day with blue sky above. Lots of smaller birds swooping close to the waves, enjoying the free uplift. 23 miles to my WP to round the shallow bank and start heading more E - keeping S of the Falklands Back to my bunk for another short nap - making up on recent lost sleep.

2pm Blue sky and sunshine disappeared a while back - totally cloudy sky now. Changed course -from NNE to ENE, around Burdwood Bank. Wind is W, although it feels rather lighter than earlier, so we can make our course on a very broad reach without gybing - excellent! Time for a very belated breakfast ... or brunch...?! 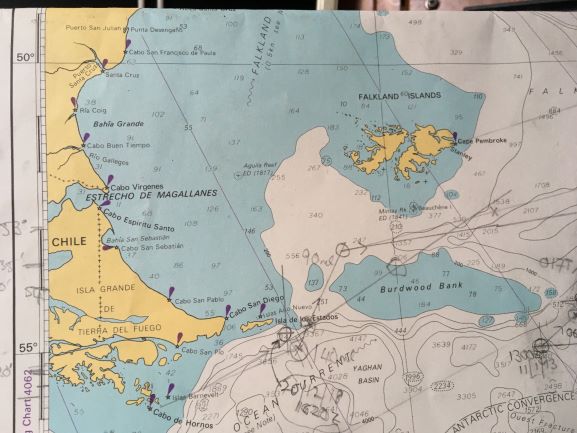 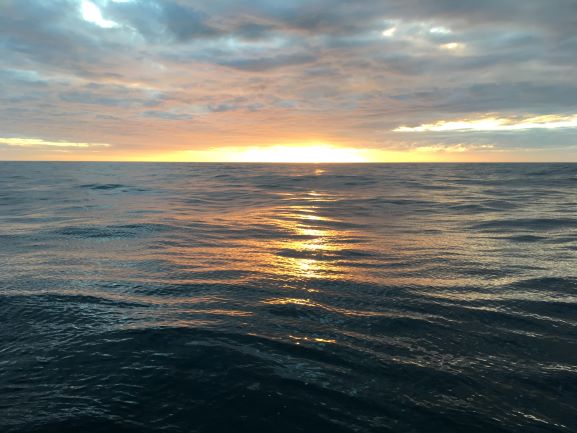