9am So much calmer now! Let out reef and unfurled full genoa to speed us along - had dropped way down while I was asleep with less wind now - ~10kt from WSW at present. Seas down although a good 2.5m / 7-8ft still.

Lazy genoa sheet was tangled on a damaged ring (two, in fact, ...those rings again!) on staysail furler/foot of sail - released and not looking very damaged, TG. Chain locker lid was closed properly after one side had opened in the stormy seas. (A friend had closed it and I'd stupidly not checked to make sure it was locked down - it wasn't... Long Falklands 3-strand thick fishing line in bag was retrieved from having tried hard to get washed overboard at the stern in same strong seas. Staysail pole was fixed in place at one end - it had come off its support there when staysail furling line tangled with it close to furling line lead... furling line slightly damaged. (Looks like in same place as I'd found the previous line had been chafed and cut.) Iridium phone handset is no longer working - phone adapter normally has four lights showing - now it shows none... Good thing I had set up my smartphone with the software and had already been using it at times - so my backup is now my mainstay...

Just noticed wind has increased a tad and gone more into SW - means our course has changed... to SSE.

Time for breakfast - and some coffee now its calmer. Then on with more jobs - plenty to do still.

2.30pm Was just about to settle down at midday(!) with coffee and breakfast, having managed a bit of a clear up in galley area, when realised wind was building .. Up on deck... big, wide area of rainy grey cloud ahead. Over next 45 mins, wind got up to 24-28 kt (apparent) and our speed got to well over 8 kts for quite a time - even reached 9 knots - we were really speeding along!! Early on, had eased the mainsheet a lot to reduce the heeling - and then, soon after, ran off more downwind - on 120T. That helped a lot - despite amazing speed and strong wind, it felt much more comfortable heading downwind. Good news was there'd not been enough time for seas to build... Bad news, once it was over, was seeing another grey mass directly ahead, despite lovely sunshine and blue sky overhead just then...! Tried to steer upwind of cloud ahead, in hope that would help - but we're now (2.30pm) headed directly for another mass of rainy grey cloud... and wind is building again. Think we're following a band of raincloud - can see strip of blue sky on horizons on each side of us.

3.15pm Think heading to windward side of cloud mass helped - raincloud is mostly off to port of us - great! This mix of winds is certainly keeping me busy today - so glad I left the first reef in earlier.... This area of showery raincloud is clearly extensive - maybe this is what gave the SF Bay area the heavy rain last night that I heard about this morning from a radio friend?

125n.ml. roughly - seems to have been our distance made good over 24 hrs Sun midnight GMT to Mon midnight GMT. 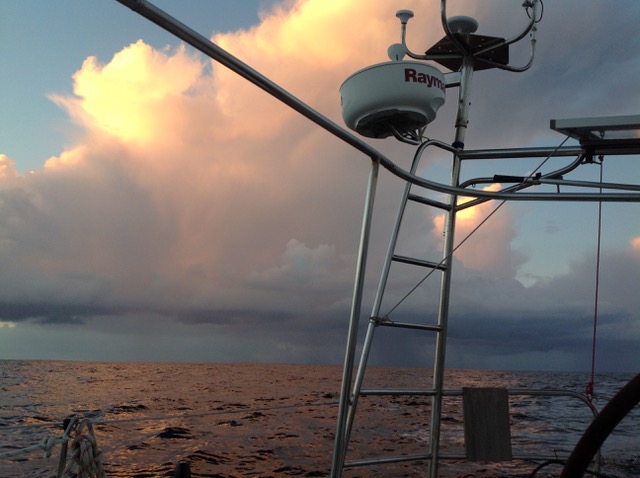