Saturday 7.30pm Some rain and grey skies. Wind, still from N, has got up some more but not too much - maybe 20-25kt - and seas much the same as earlier - about 3m or more, quite close together so keeping us rolling around a lot.

Just chatted on radio on 20m - propagation to Florida not too good now - a bit earlier would have been better but I forgot that we'd changed the timing! Will be on again soon, at 0000Z, to try to speak to the W coast and B.C. - had good propagation to there yesterday.

10:45pm Wave came crashing over Nereida's deck - always a lot of noise, but all OK. Wind up to maybe 20-25kt now, gusting more, maybe. Dark, now.... Sunset was just before 8pm - made for a good chat on 20m to Rick, VE7TK, in Victoria - we both had sunset occurring around the same time - so-called 'grey line' conditions for both of us - good for radio propagation between us. Also had Juan, LU4VL, come on from Argentina - always a very strong signal.

Sunday 4am Hoped to make contact with Uku - but was not on any frequency at usual time. Think he's probably got some pretty nasty conditions where he is now - high thirty knots with gusts in fifties quite likely and seas to match - not nice.... If he'd had access to proper weather info, he might well have avoided the system - but that was not allowed under GGR rules - I disagree thoroughly with that policy - leads unnecessarily to dangerous situations for the racers. How many are left...?? And how many completed the original race...?? Uku also does not have a Jordan Series Drogue which, properly deployed, keeps boats safe in strong conditions.

11:30am Finally underway, heading NE - but not much wind. Nice that seas have died down. Total overcast sky, although getting brighter as sun tries to shine through.

2pm Sunshine and blue sky - always lifts the spirits! Been on deck for quite a time. Albatrosses, petrels and (Great) shearwaters around the boat as I was busy - shaking out reefs and dealing with other things. Making better speed now but almost dead downwind so must keep an eye on wind direction - presently SW at 10-12kt but if it veers any more to the W, we'll have to gybe the main.

Tried to contact Uku on 'One and All' again - but no reply on our usual frequency at this time. Wonder if he might still be heading S, running before strong N winds with just a storm jib hoisted....? Hope he's OK.

3pm Wind increased to SW 15kt and, with it, our boat speed - up to 6kt at times. Beautiful sunny day - temperature has reached 14C - unheard of! 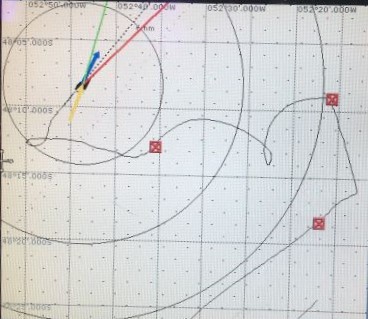