Monday Had quite an enjoyable New Year's Eve - the sky was totally clear all afternoon and so sunset was lovely, with wind and seas not too great.

Made lots of contacts on radio, so lots of New Year greetings exchanged, and being hove to made for a relaxed atmosphere on board to enjoy a little celebration.

Tuesday Was woken just before 7am by F7 winds from NW. Then I had a message to say that the nasty Low forming soon seemed to be expected slightly further S than previously forecast so it would be a good idea to move Nereida more to the SW so as not to be at risk from being too close. I was really pleased I'd taken the time to tie in the 2nd and 3rd reefs on heaving to yesterday, expecting stronger winds to arrive!

9am With winds forecast to back from NW to WSW, I had soon realised that, in order to head SW, there was no alternative but to move now! It was blowing around 30-32kt with total cloud cover and seas were 6m or so - pretty steep, rather close and often washing the decks - I got a dousing fairly soon! There was a flash of lightning and thunder - that worried me but I was relieved not to see or hear any more. So, we're now underway and have been sailing in big seas and 30kt winds ever since.

By midday, the wind had duly backed from NW to W so our course changed accordingly - we were as close-hauled as possible, trying to head SW and making 4-5 kt.

3pm The sun was out again and the sky had cleared but the wind and seas were still well up. Wind had been from WSW for a time and our course was finally becoming just E of due S so I felt we should stop rather than heading on any further. So we heaved to yet again - it's becoming a familiar routine...!

Seeing our drift was about 1.5kt to the SE, I then changed tack to drift, I hoped, to NW. As it turned out, we drifted more to the N, even just E of N, but only at 0.9kt so that was acceptable. Seas remained high all day long, so the boat was rocked quite violently at times, with seas washing the decks regularly, as we came off the top of one wave and heeled over into the trough before the next.

I'd had no breakfast as yet, so I was more than ready to settle down and catch up, both on sleep and food - writing up my log report would have to wait a bit - I was very tired after a late New Year's Eve...! 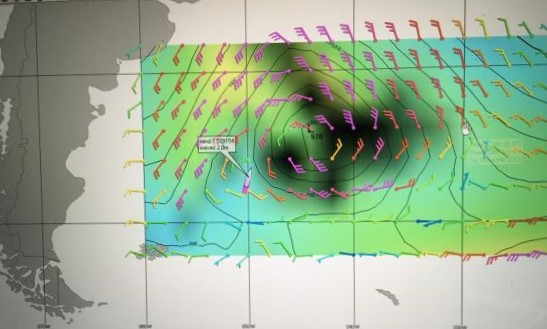 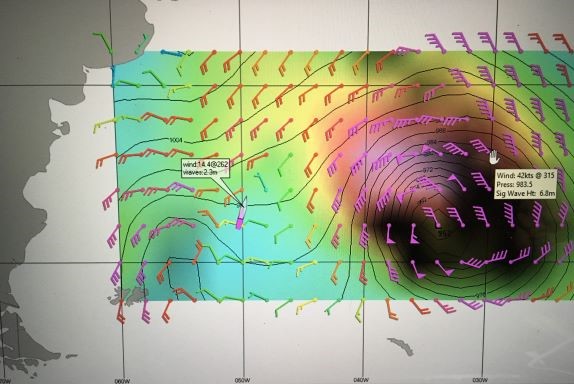