Tuesday A lovely clear blue sky all afternoon and a pleasant sail in light winds. Made good use of the genoa..

8pm Sunset was glorious - a clear pink-blue sky and lovely orange setting sun. Almost immediately, a thin broken cloud layer spread over but I spotted the sliver of the new moon just above the W horizon, almost too slender a crescent to see.

9pm The wind seems to have settled into the NNW at 15kt. We're making over 6kt, heading ENE, and seas aren't too bad - it's feeling relatively smooth, in fact. Finished my curry earlier, so time to get to my bunk - can't sleep too long at a stretch since the wind is forecast to be all over the place - so regular checks are needed and Fred (the wind-steering Hydrovane) adjusted if we're to stay heading roughly NE-ENE. I use a timer with a loud chime to wake me up.

Tuesday 3am Up on deck to adjust Fred - nearly dawn and Southern Cross almost overhead. Lots of bright stars. Wind backing to W, so course too far N before being changed. Also sails needed trimming for new point of sail - very broad reach now in W 8kt, making 3.5kt now - slowed down a lot from around midnight when making 6kt in NW 18kt.

By 4am, a line of pink on E horizon and plenty of light to see by. Back to bunk for another short sleep.

8:30 am On radio. Uku, followed by Mark, getting their usual daily weather report from Bob, VP8LP, on 20m radio band. I could not hear Uku, but at 2000Z (5pmLT) copy was good yesterday and he was also able to chat to Mark and relay to me - so I'll do that again, later today.

Ian, VK3MO came on freq later and changed frequency to give me update on the five racers - nice to have. Mark just 306 miles behind Jean-Luc at 0900Z.

7:30am Just gybed back again after gybing onto starboard tack a short while ago. Wind looked as though it had backed and was coming from the WSW so I'd gybed around, hoping to maintain our course - but the wind promptly veered to WNW again - so had to gybe back again. Wind is very light, at 4kt, so that's probably why - it's just being fickle!

Back to my bunk for some more sleep - with timer set.

10:45am Bright sunny day, few clouds around. Wind has decided to veer into the NNE-NE ... so difficult to head ENE. Fortunately, it's still very light, at 6-7 kt, so we're effectively drifting ESE at about 1.7 kt. Time for coffee...

12:30pm I decided that it was pointless heading SE at 2 kt in the present 10kt NNE wind, forecast to remain for several more hours, so I have just furled in the genoa, sheeted out the main a little more, turned the helm into the wind - and we're now hove-to, making 0.3kt - effectively stopped. The fact that we're drifting downwind is almost irrelevant since our SOG (speed) is so low - better than making 2kt SE. East would be fine but I've no desire to head any more S just now than is avoidable.

I like this way of heaving to - when I want to get back underway, all I have to do is to unfurl the genoa (or staysail), sheet in on the mainsail, turn the wheel to point us in the direction required - and we're away.

It's feeling very peaceful, drifting in the bright sun of a southern hemisphere summer day...

3:30pm Sun has disappeared behind a cloud layer and wind has increased to a little and backed very slightly to NNE.
Had a good long chat with Uku - nice to find a good frequency and have good propagation so a sensible conversation can be carried out! He's in a S wind just now, so making fair progress.

Waiting for the wind here to back to N at ~15kt - maybe in a few more hours' time - so then we can get underway again and sail E, hopefully.

Getting a few jobs done around the boat. Adjusted the rod-kicker lashing's 'chafe protector' which keeps moving - not happy about that and trying to figure out what I can do.

A problem I noticed yesterday was that one of the genoa car sheaves has broken - could give a big chafe problem. I'm trying to keep the car more upright to stop the genoa sheet (rope!) getting onto that broken side and chafing - a difficult problem to overcome.
Another minor problem, easily overcome but annoying, was that both zipper tags on the storm screen zip broke off on the same day - aluminium is not good in a salty environment and corrodes quickly. 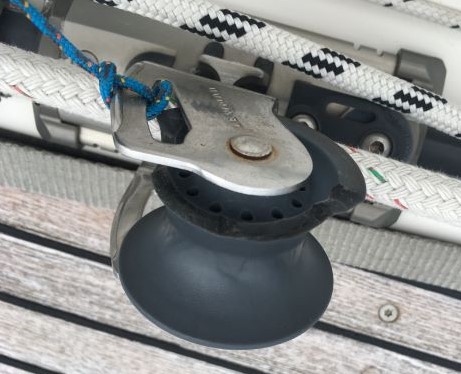 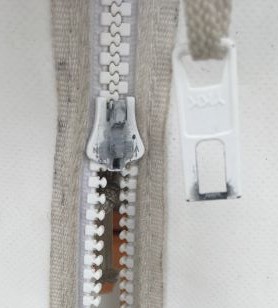