Monday evening: Wind 9kt, Speed over the ground (SOG) 4.5kt.... five minutes later: wind 13kt, SOG 5.1 kt Another strong gust on its way?? Wind has been really gusty and shifty all day long under a gloomy grey cloud cover... Frequently, we shoot up to 6.5 kt SOG in wind of over 16kt and Fred has trouble coping with the steering under full canvas, not surprisingly. Think I might reef down for overnight, even though it will probably slow us down - just to be safe.

I've been looking at a couple of strong weather systems forecast along the Mexican coast over the coming few days - a thoroughly good reason to be heading more away from there, on our present course of roughly SSW - 'roughly' because it varies depending on wind strength and direction - wind keepss swinging between just W of N and NNE at present.

8.30pm PDT Finished Pacific Seafarers' Net on 14300kHz. Not many boats checking in at present - think I might be the only one tomorrow, with 'Banyan' and others having made landfall over last few days. There have been several boats I know from La Cruz de Huanacaxtle, Mexico, earlier this year - they were preparing to make the three-week crossing over to French Polynesia from La Cruz in March/April.

Wind seems to be rather less gusty than earlier so I'll leave the full mainsail overnight. Wind direction should stay the same as now, so our course will continue to be SSW. If anything bad happens, I'll know immediately, even if I'm asleep at the time. I know every sound the boat makes as we sail along....

9.50pm A gust up to 18kt from N-NNE now.... but rare now, so I'll stay with present sail configuration overnight

Tuesday 3.30am Dark, dark, dark under cloud cover. Often feels a bit weird to be making way, charging into pitch black darkness in the middle of a vast expanse of seawater - but there are no rocks to hit and plenty of sea room to manoeuvre if something goes amiss...! Making 3.8kt SOG - glad I didn't put in the reef I was considering! Broad-reaching still in 10kt wind from N. At 4am, went on HF radio to 7163kHz - great signals from most East USA stations and I also just about managed to make contact with David in Ecuador, HC5DX, high up in the mountains, I gather! Then back to my bunk....

8.30am Was nice to see some bright sunshine from gaps in broken cloud. Started chatting to the 7155 Group on HF radio as I began making a log entry and realised the wind had veered a lot - to E of NE - we were heading due W! - that was definitely not on my plan! (High pressure calms lie in that direction.) Gave my apologies to the radio group for such a brief visit with them and hurried up on deck to gybe around.... Eventually made a course of S-SSW again - but the wind is still light and very shifty so I constantly need to keep an eye on our heading and adjust Fred occasionally

11.30am We're gliding along silently with faint burbling of water along the hull just audible. Not making much speed but the sun is out and we're roughly(!) on course... Life is good! Thinking about boat jobs still to do - presently packing my 'grab bag' - the item you hope you'll not need (like the life raft and EPIRB) but if you do, it needs to be ready to grab in an instant! Dug out my passport, cards and boat papers to add into it in a small waterproof box.

Seeing 4kt wind and 2.2kt SOG... Oh well... I knew the wind was likely to get very light around here - pressure is up to over 1020hPa. I'll get on with boat jobs, to make the most of the calm condtions. Would be nice if the list could reduce to zero! Up on deck to check things out....

One irritation is the leech line of the genoa - it has got stuck somehow and is pulled in too tightly so the leech of the genoa is gathered up instead of straight. While changing it over from starboard tack onto the pole to port, I was able to reach the leech line in an attempt to free it - but it would not come free.... It's stuck in the small cleat just above the clew... When the clew is lower - on another point of sail much closer to the wind, maybe - I might be able to reach it safely to investigate more. For the time being, I'll have to ignore it - but it does not look pretty!

1200 PDT - end of Day13. We made 103 n.ml. (DMG) over the 24 hr period since yesterday - slow again.... Speed up slightly now (4kt) - varies a lot. Good to see the solar panels earning their keep finally - when not shaded by the sails. Heading S, I can tilt them to give a fair angle to maximise input - now 7A - not a lot, due to some shading, but "every little bit helps". Warmer now, so having to discard the fleece I've been wrearing recently. No wind input, at present. 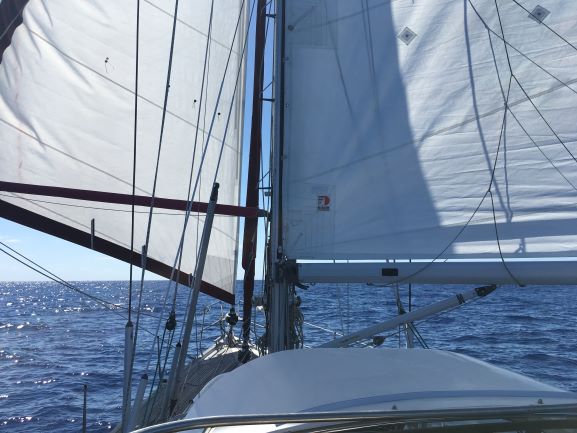 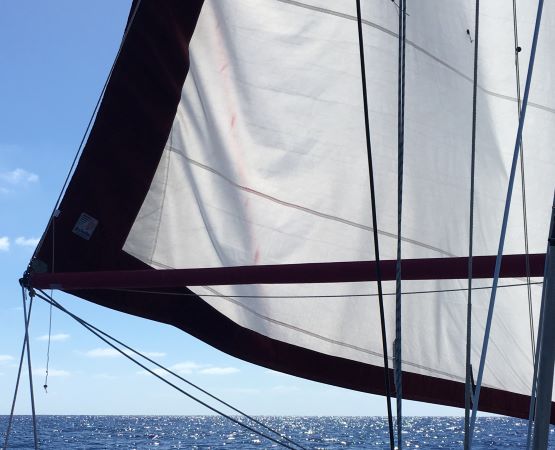