4pm What a wonderful sail we're having just now! We're broad-reaching in NE wind of around 15-18t, making over 6kt most of the time, in glorious sunshine. The sea is that clear, deep, deep blue of the Tropics and the swell is not much and from astern.... No sign of any squalls so far. (They will come soon enough, no doubt!)

Looking at weather files, the hurricane formation off Mexico expected over the weekend and into next week shouldn't affect us directly (fingers well crossed...) - but, clearly, that's something to pay close attention to. The systems are definitely affecting the weather patterns in this part of the Pacific.

In the meantime, I'm just enjoying thoroughly the great sailing of this part of my jouney - it might turn out to be the best overall!

5pm How easy it is to become complacent when running downwind! No sooner had I written that, overlooking the fact that we were now over-canvassed for the increased wind strength, than Fred was overpowered by an unfortunate combination of a big swell that knocked us over coinciding with pointing almost dead downwind at that moment - the mainsail was backed again - we were in 'irons'.... a now-familiar scenario... I reefed the mainsail and then the genoa and got us back on course.

Afer all that, we were still making over 6kt - yet again! I'd really like to get the genoa off the pole, but our course and general wind direction dictate that it stays in use in the shifty winds.

A further problem soon became apparent - the genoa had been flogging from heading upwind in order to reef down and the pole uplift shackle had come loose - the line (& shackle) started flying around madly. Luckily, it caught itself on a shroud and a stowed line, so I was able to grab it and stow it safely - but the pole is now held up by the genoa sheet alone, which will add an interesting twist, although shouldn't prove too difficult (I hope!), to when I come to take the genoa off the pole.

7.30pm PDT Decided to start cooking early - well before the sun began sinking into the W horizon. I'd left it too late yesterday and ended up not cooking at all, although I was quite happy finishing up some nicely ripe Brie on multigrain bread... Had a great meal of gammon, fried eggs and fried, diced potatoes with sweetcorn - all very tasty! I was famished, having missed lunch again.

2a.m. Friday Wind dropped so released all reefs. Not happy with the pole - having unfurled most of the genoa, it's looking quite drunken, with its end far too low down now and held down by genoa sheet and other lines. Will need to furl in the genoa and drop the pole at some point and re-attach the pole topping lift to give it the support it needs to bring it higher.

3.20a.m. Back down below after putting reef back in the mainsail again! That was clearly just a lull - main was backed almost immediately with increased wind of 18kt in the rolly swell conditions. It's presently around 16kt - just 'on the edge'... The hoisting and lowering of the main halyard involved several trips to the mast, both to check that all was free to move and also to tie in the first reef cringle forward to the mast to relieve tension on the sail slide above it. (Sailmakers never seem to read the Selden instructions about placing that first reef point above the boom more aft than the others.) The moon had set, orange-yellow, around 2.30am. Back to my bunk .....

11am We've been sailing in the NE Trades over the last few days. Yesterday, with fewer clouds around than at present (we've almost complete cover), there were clear lines of small clouds along the wind direction.

I found one squid right on top of the hard top over the companionway - they don't usually fly like flying fish so it must have been brought there by e strong wind and rough seas overnight.... We're rocking and rolling a lot in the bigger seas brought on by 18-20kt winds now but we're making good speed - around 6.5 kt..

11.45am Just finished today's clearing up in the galley... Always ends with the 'grand opening' of the galley seacock - good timing needed as we roll from side to side! 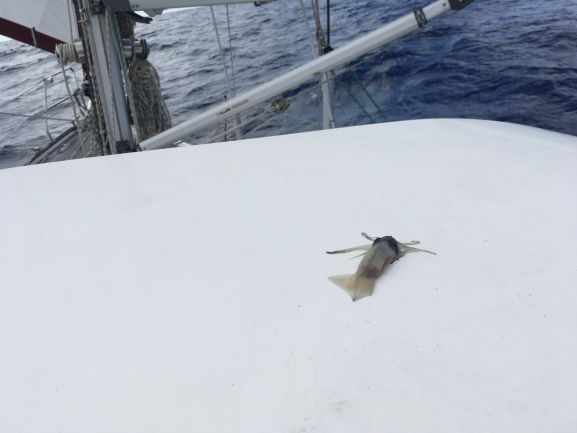 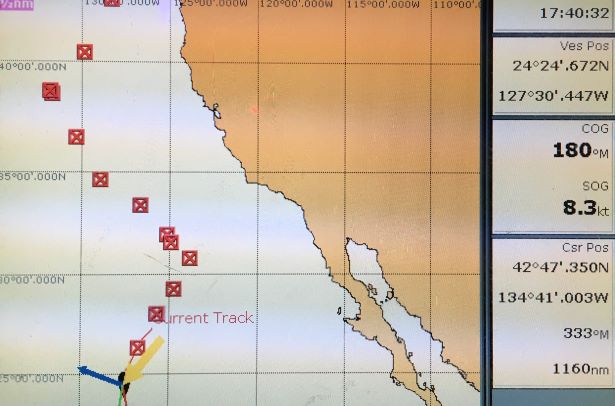