(Note to UK friends - I'll be chatting 'live' from 'Nereida' around 8.30am BST on BBC Solent Radio's "Breakfast Show" Tuesday 23rd Oct. Thanks to Redport/GMN for making that possible via the Aurora satellite terminal loaned to me with Iridium airtime)

It has got warm enough for me to have to discard my last fleece layer... 24C air temperature is quite pleasant. The sea is warmer - 30C at its surface. No wonder Mexico has hurricanes - they feed off the warm waters.

Sat 4pm Finished sorting out the pole - had to furl in the genoa and release the lines holding the pole - happy that I managed to avoid a 'genoa wrap' (close call!) and that I also avoided dragging the pole end in the sea - just! Wasn't too bad a task. Conditions have been a lot calmer today, in generally lighter wind than yesterday, so that's why it finally got done.

Next jobs are the galley locker door and the gate support in the port lifelines - another job to be done while it's fairly calm - likely to get more 'boisterous' in a day or so. For the moment, I've used 'Gorilla' tape to help keep the door in place when I open it!

9.30pm Dealt with gate support missing screw and checked all the others before my evening meal at sunset - all tight and in place now. Lovely moonlit night - most of the clouds have disappeared. Took genoa off pole and over to starboard - wind has veered to ENE and want to keep on a southerly course - so needed to change course relative to the wind. While organising that, had to go forward to release genoa sheet - and spotted that the shackle at the foot of the staysail was undone so staysail was no longer held down. Will need very light wind to unfurl the staysail, release the staysail halyard and re-connect the shackle before tensioning the halyard again and furling the sail. Will also need to look carefully at the furling line - think it needs re-winding. Might have to wait for wind to be sufficiently light. Have tied down foot of staysail as best I can in the meantime.

Just before sunrise, took first reef in mainsail - too much canvas in wind up to 17kt again- boat speed still ~6.5kt. Overnight, cloud cover had appeared to give a dark, moonless night but now it was clear again with cloud only on the E and W horizons. The sky stayed clear and sunny with just a few light clouds appearing by midday.

Busy morning trying to check on weather and best southerly course to make. With nasty convection to the W of here, reaching well down to the ITCZ, which is around 8-10N, I'm trying to avoid heading too close to 130W - my original plan. Also, there's another small Low to the E, around 120W - so I'm hoping to 'thread the needle', presently trying to make a course of roughly 170T. Another problem is the most unusual headwind - a S wind - being forecast just below the ITCZ, to the east of 130W, next week. Will decide how to tackle that problem nearer the time - I'm still about five days away from 10N.

10am PDT Three tropic birds came by - graceful white birds - but making a really croaky sound! Couldn't see whether red- or white-tailed ones - colour of tail streamers wasn't easily seen, as they circled the boat at a distance. Got the impression they would have landed if they could... From lack of black markings on wings, think they must have been red-tailed but my N. America birds reference only mentions red-billed - which these might have been if it weren't for them missing the black wing markings shown. So I'll have to be content with simply labelling them 'tropic birds'!

1200 PDT - end of Day18. We made 128 n.ml. (DMG) over the 24 hr period since yesterday. Wind has been mostly from NNE - had to get on deck well after midnight to adjust Fred so we could make a better southerly course. 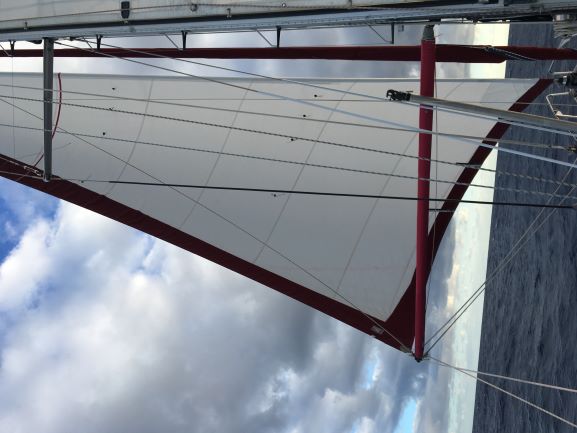 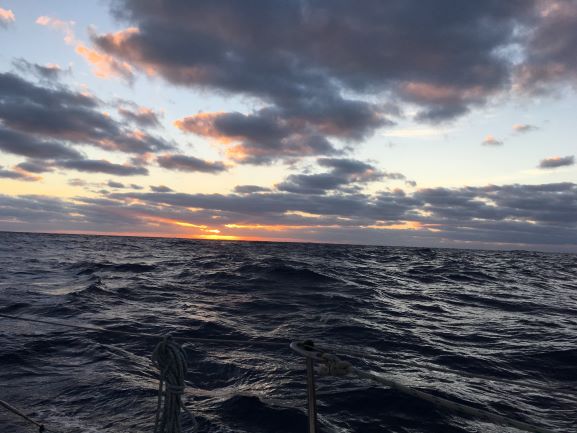