After posting my daily report yesterday, I realised the solar display seemed to be very low - at midday, in full sun at times, as the boat moves around, we were only getting half of what I expected to see. I went to check the fuses again - the circuit that had been fine before was still so but the circuit that had had a blown fuse was giving no power at all. I even changed the fuse twice over - but fuses were fine, circuit not. So now I have to chase the wiring and connections back to the panels - in present rolly conditions not something I fancy doing on the after-deck, perched over the stern with a multimeter and nothing much else to hold on to...

5pm Frigate bird flew by - but didn't stop... (They like to perch on mast tops overnight - often doing damage - they're big, heavy birds!) Very warm, blue sky, just a few clouds with a band of cloud over SE horizon. Winds have been fairly consistent at 16-17kt from NNE.

Making ~170T, heading for possible gap in ITCZ at 128-9W - if I'm lucky, that will work but will no doubt find squally weather soon after. ITCZ is not looking too good just now. We're well out of the path of the big Mexican hurricane - but it seems to be affecting the winds south of here - they're all looking a bit of a mess!

Went to make a quick visual inspection of the solar panels and their wiring - nothing untoward seen, so nothing achieved so far....

As sun was getting low, started cooking evening meal - perfect timing... all done in good light. Lovely sunset - decided not to post photo - how many gorgeous sunset photos can one post??! Noted sun had disappeared by 7.10pm PDT. Got to eat meal in last of daylight, well before checking in to Pacific Seafarers' Net. Good copy on Jane, NH7TZ, in Kauai so was able to give my report easily. Nice to speak to John, VK4DBJ, briefly - he's high up, inland from Brisbane, Australia.

Didn't sleep too well overnight - kept hearing strong wind and feeling big swell - so eventually took in a second reef and things calmed down. But then kept convincing myself the wind had changed direction and we were heading on a stupid course - got up several times to check ... Each time we were beautifully on course - so eventually got some sleep!

Monday Grey skies - we had RAIN overnight! First for a long time - a good rinse off for all the sticky salt deposits everywhere on deck! Winds were very light after that, so out came the 2nd reef I'd tied in during the early hours when winds were over 20kt for a time.

Still studying the frequent weather updates I'm asking for. Heading more towards 130W now - hoping to avoid a big area of convection to E of there as we near 10N. Photo shows Mexican hurricane - 'Nereida' is just off the photo to left of middle - well out of harm's way. I'm getting these satellie images regularly to see where the 'nasty' convection is - and try to avoid it. In the second photo, 'Nereida' is in the second (clear) square to left of the hurricane's centre - no bad weather here for a day or two. 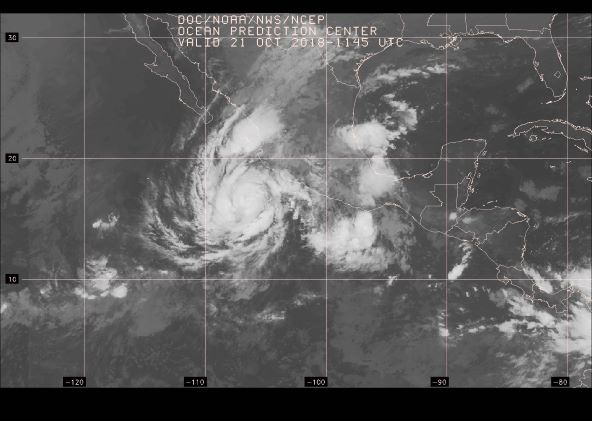 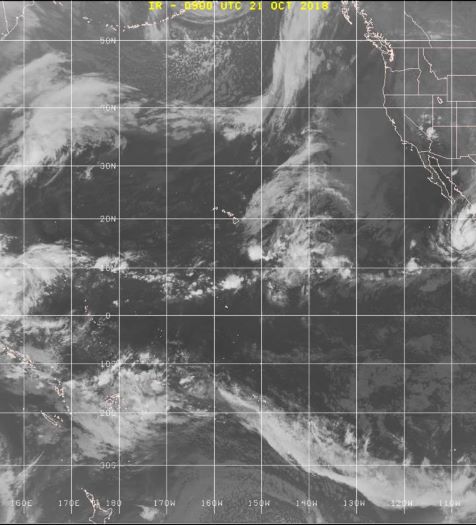