Monday 1:30pm Everything is feeling really smooth and gentle - so much calmer now. Sky still totally overcast - but with light grey cloud and sun trying to peek through.... Swell down, now winds have eased to around 13kt - we're on a very broad reach - not quite broad enough to warrant poling out the genoa. Also, just not calm enough to see to the staysail. I need almost total calm for that - but I suspect that will be coming my way soon enough, looking at the weather files.

Unlike Randall, attempting his 'Figure of 8' journey, the 'unassisted' tag on my nonstop solo attempt won't allow me the luxury of using my engine at any time to help me to get through a difficult patch - my attempt has to be under sail alone from start to finish. So in calms or light headwinds (in just a few days time - Sat-Sun??) we're likely to be floundering around for a bit!! Always frustrating but that's how it is... I just hope that the S winds and calms from there on will not last for as long as forecast - looking like several days, at the moment..... Yuck!

On with the jobs, while this afternoon's smooth sailing lasts.... Sun's getting out...

4pm What a lovely day! I realised that I could sit on deck, dealing with adding/replacing bungies to several blocks that are leading lines aft and, although the sun was shining brightly with few clouds around, I was in the shade of the mainsail - perfect! I then sat in the cockpit and ate a late lunch - see the photos taken of the view to port and starboard from my 'dining room'!

We're making way at ~5kt so very smoothly, in wind of ~14kt, broad-reaching. It's calm enough to get several outstanding small jobs completed - but I haven't yet had a look at the solar panel issue. That's going to involve quite a bit of digging around in the aft cabin. It's a good thing my Superwind wind generator has been whizzing around merrily when the wind gets up.

The scene near sunset was quite dramatic, with rain falling from dark grey cloud masses well off to starboard, on either side of the sun - I just had to take a photo.

Tuesday - I had to be awake just after midnight for my 'sked' with BBC Radio Solent .... soon after 12:30am PDT(here) = 8.30am BST (UK time), for their Breakfast Show. Had the phone powered up ready for their call - hoping the call wouldn't 'drop' mid-conversation, as Iridium calls have the annoying habit of doing... but all went well and the connection was pretty good. I gather it's Half Term week - so I hope everyone's enjoying their week off school.

Just before I went on air with the BBC, we were still making way well but soon after, the wind slowly died and now, at 1.30am PDT, we're only moving at 3.5kt in NE winds of 8kt. It's going to take us a long time to get through the ITCZ at this rate...! Back to my bunk for some more sleep...

Tues morning A relaxing day - the sun is not quite managing to get out from under a light grey cloud. No rainclouds seen nearby. Ambling along....

Changed course to due S after looking at latest weather info - if we're VERY lucky, we might manage to get through the Doldrum calms on Sat/Sun without too much drifting around aimlessly - in fact, I'm hoping we might get through there before the wind dies completely - but that's being unduly optimistic, I think. Likely also to get some heavy rain at times - looks to be unavoidable.... and if we don't make way fast enough now, we could get caught and be drifting around for two days... Time will tell!

It's calm enough today to have a go at the top hinge on the galley door that needs its screws replaced. The Gorilla tape is doing an excellent job, holding the top of the door in position when opened and so easing the stress on the lower hinge. I've plenty more matchsticks! Let's hope this repair will last longer than the last one.

Then, I'll have to bite the bullet and see if I can track down the cause of the solar panel failure - don't hold out much hope of success there, but I must at least explore the options.

1200 PDT - end of Day20. We made 123 n.ml. (DMG) over the 24 hr period since yesterday.I expected it to be less but occasionally our speed has got up to over 5kt! Small group of storm petrels seen nearby - dipping into the sea and flitting over its surface - lovely to see (and hear) them.

Position & weather report posted to Winlink.org and Shiptrak.org (using my US callsign of kc2iov) not long after midday PDT (=1900 GMT: 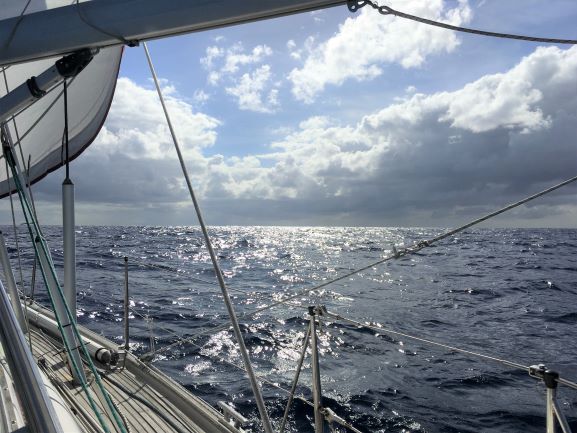 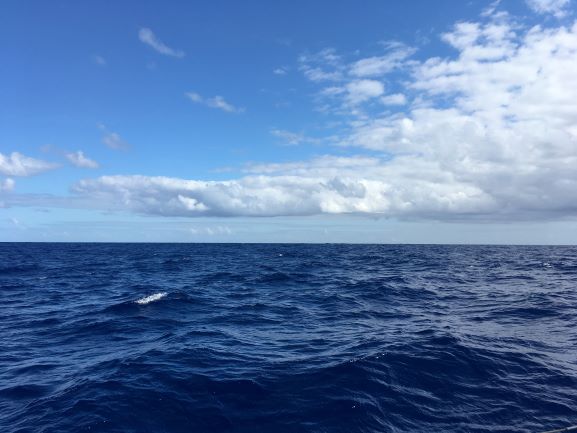 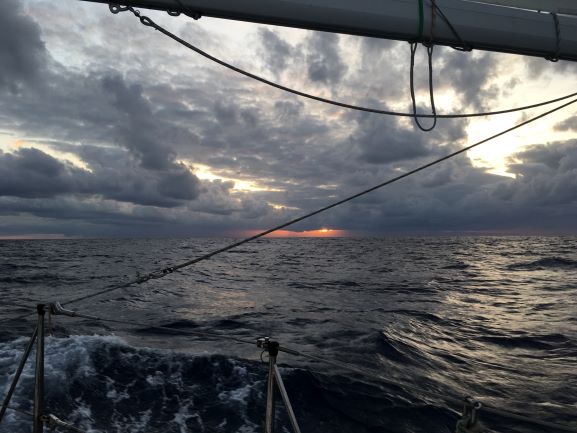