Tues 2pm Sun getting out nicely now, fewer clouds. Still have company of a few storm petrels. Poled out genoa on changing course - now more downwind. Heading now to 10N, 130W - my original WP. Looks as though that will give us the best chance of getting through the near-calms around 8-10N without being stopped in our tracks. Constantly reviewing the sail trim and our course in preent light wind (~9kt) that keeps varying from NNE - ENE....

3.30pm All of a sudden, the wind backed slightly (to NE) and gusted up to over 16kt ... We picked up speed to 6.5-7kt - and not a cloud nearby - clear blue sky... Struck me as odd, but great to have the speed. (The increased wind continued but settled down to ~15kt. Took the genoa off the pole and over to starboard, furled in a touch. We're still making 6.5-7kt SOG but it's feeling perfectly comfortable.

It was calm enough today to have a go at the top hinge on the galley door that needs its screws replaced. The Gorilla tape is doing an excellent job, holding the top of the door in position when opened and so easing the stress on the lower hinge fixings. I've plenty more matchsticks! I was hoping to make a repair that would last longer than the last one. but it hasn't worked out too well - need more matchsticks or something else to help the screws stay put in the holes... I'll try thicker screws tomorrow.

Took time out from the jobs to have a long chat on 20m with a radio friend.

Went to the aft cabin to get to the solar panel wiring. Side-tracked by need to secure a few items better and clear a path to the wiring area... Would be good if I can track down the cause of the solar panel failure - don't hold out much hope of success there, but I must at least explore the options.

In opening up the area, I noticed an earth lead on the cable leading down from the Superwind wind generator was not connected. That worried me greatly, but after taking photos from every possible angle, thinking I'd ask the company for advice (they've been really helpful in the past) and then checking out the wiring diagrams, it appears the wire is a spare and definitely should not be connected up..... A big relief!

That took quite a time to resolve so I'll investigate the wiring from the solar panels tomorrow.

The sun set tonight in a sky almost devoid of cloud - it's been clear all afternoon - saw a Leach's petrel - distinctive white rump.

The bulk carrier 'Eagle' came within one mile astern of us this evening - on its way with LPG to Korea from Gulf of Mexico I was told, on calling them on VHF for a quick chat. I could hear its engines clearly. Showed that it is a very good idea to keep the AIS switched on, so Nereida can be 'seen' from a distance!

Wed 11.40am Just put tools and spare screws away after fixing the galley door hinge - longer, thicker.... Usually works and it feels as though the screws have really 'bitten' this time! Managed to wedge myself well into place so I could work in the quite rolly conditions - with the wind well up since yesterday, the seas are up as well, with frequent bigger ones catching us to throw the boat about more. Makes getting jobs done a bit challenging! Now I just have to remember to lock the door in place when I close it, to prevent it coming open with a crash in the swell....

Bright, clear sky and good wind A paradise for sailing the oceans... Making good progress SSW - but towards the Doldrums - will we get caught out in the forecast calms on Saturday?? Time will tell!

Next - on to the solar panel problem - multimeter in hand (seeing 10A input on occasion - pity it's not doubled). What would we do without a multimeter?? That job will have to wait for a little later. It's time now for my midday position & weather report and DMG measuring.

Position & weather report posted to Winlink.org and Shiptrak.org (using my US callsign of kc2iov) not long after midday PDT (=1900 GMT: 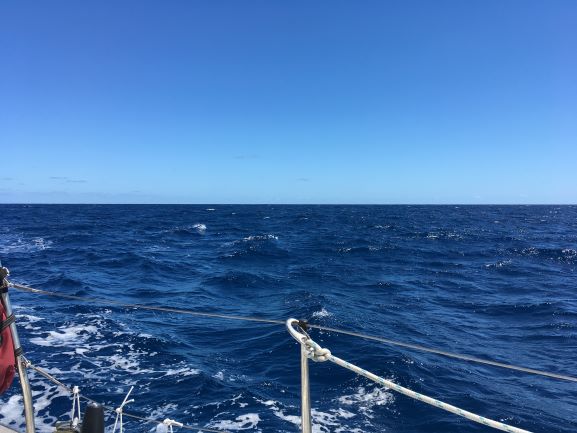