Wed 3.40pm Another lovely sailing afternoon - bright sun, good wind. Decided it was time to lower and stow the genoa pole - doesn't look as though it will be needed anytime soon. That meant changing the genoa sheet lead on that side - which in turn lead to a thorough checking of all lines on the port side - need to make sure they all run corrctly as and when they're needed. About time for a drink and some lunch...

Studying the weather, as usual. Looks as though it will be touch and go whether I get through the imminent calm area before the wind dies totally in two days' time...

Thurs 8.30am A full moon lit up the sea last night - went on deck several times to adjust our course as the wind shifted and it was so bright - lovely! The downside a such a bright moon, of course, is not being able to see many stars, despite the few clouds around. Early on, there was a solitary small cloud high up near the moon - the only cloud to be seen.... Ambient air emperature is now around 26C/80F and humidity is fairly high so it was refreshing to sit out in the cool night air.

Wind has mainly kept up in strength (16-18kt) but has been backing and veering - really shifty - betweet NNE and ENE. Aiming for 10N, 130W still looks like our best option so we're broad-reaching all the time and the swell really caught us out yesterday.

I'd checked again the fuse area of the solar panel wiring, in case I'd missed something simple there, but no power whatsoever is coming into the one fuse, which is fine. I was about to dig further into the recesses of the aft cabin to look at the wiring at the base of the pole leading down from the solar panels to inside the boat when the mainsail was backed - we gybed in a bigger swell - we went hove-to. That took quite a time to sort out because I'd not secured the preventer line and it caught badly on the metal of my bimini support - I had to move fast to avert a mini disaster!

I was wondering if the chafed area on the cable found the evening before I left had caused that one solar panel a major problem - maybe it had caused a short? But then, a week ago, the fuse had blown, I replaced it and, for a time, we had full solar power.... So I just don't know what's going on, but I'm thankful the wind generator and the other solar panel are working well, along with the small diesel generator.

It's still looking very hit-and-miss whether we'll get through the Doldrums (ITCZ) without a problem - chances are high that we'll be moving too slowly in a bad direction, given the forecast light winds which will be coming from every which way but mainly heading us... So I'm expecting we'll be becalmed at some point over this weekend and maybe into next week. Que sera, sera!

11.15am When the wind is gusting up to over 23kt, it's definitely time to tie in a reef! Now done. Control is far better... Wind is from NE and seas are up in line with the increased wind strength. A lot of big clouds around but none looking squally/rainy and the the sun is managing to peek through from time to time. Getting hot and sticky - 28C/83F, humidity 76%. Too rough to chase after wiring problems. 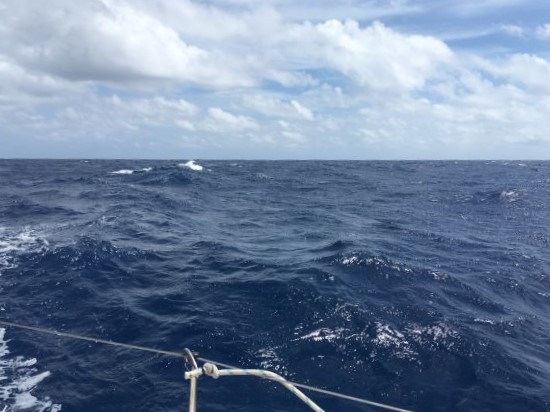