Please note - apologies, but emails mainly not being replied to just now to conserve battery power - less power is needed to download them than to send replies to them! Nice to get them - but please keep them short - thanks!

Saturday
Feels odd to be totally still and at peace with no swell to make doing things on board difficult.
Started on clearing up in main cabin - lots to do there, especially with two boxes of electrical bits and pieces having emptied themselves onto the cabin sole (floor!). Needed to move big plotter back up to the cockpit but kept it disconnected and covered both sides of all connectors with tape and a plastic bag over the cable ends.
Looked at the instruments up there with a view to them behaving as 'stand alones' but decided to go first for checking the wiring to them from the chart table area. Got side-tracked by a box of fuses that had emptied themselves all over the chart table area. Each needed checking for continuity since several among them had been blown when getting the plotter back into action.
Made a fused connection to join the wire that had been cut to the top instruments (that had allowed plotter to be used) - will connect up and deal with in daylight on Sunday
Finished packing the Jordan series drogue (JSD) away into a sail bag, after untwisting it from around a pole in the way - not the most convenient of bags to use but, having lost the original dedicated bags to Neptune, I'm running out of options. Next problem is how to stow it safely but conveniently somewhere on deck. Tidied a lot of the lines in the cockpit. The control line used in the sliding mainsail traveller is damaged and needs replacing - hope I've something useful for that. Also, the lazyjacks on both sides of the mainsail/boom need remaking after a line broke - one a long time ago, the other just yesterday.
Made a big, thick bean and barley soup to keep me warm - it's cold - overnight temperature expected to drop to 5C/41F and I'm seeing 8.8C in the cabin - wearing lots of fleeces and my warm hat again.
Constantly checking battery voltage and running generator when needed. Opened up bunk top above batteries to check voltages there. Trying to resolve the charging problem - lots to think about and check on.
Using minimal power - headlamp and torches being used when dark to avoid draining batteries any more than necessary and instruments and AIS turned off. Computer and iPhone charged, radio used for email downloading and watermaker run only when generator running.
No rain today - bright and sunny - so sail should be getting fairly dry ready for repair needed. There are three tears, one of them a long one by the leech above the top batten - will be difficult to mend but have some coloured UV strip material that I'm hoping to use there and sticky sail repair tape for the other two tears - will need stitching also.

Sunday
Ran generator for a time, checked temperatures of individual batteries and later checked battery voltages - both in circuit and individually. No sign of any one battery being any different from the rest - no obvious 'dud' one. Puzzled by small amount of charge being input. Noted values and sent off emails to a couple of friends for their suggestions and later was able to discuss over the phone also. Either it's a battery problem or maybe a generator/regulator problem - I'm trying to find out... taking up a lot of time.

One highlight today was getting the cockpit instruments running and successfully connecting to the plotter. I first completed the fused connection without any of the instruments connected - all was fine. Then went to add in Wind/Speed/Depth one by one - but noticed the terminals at the ends of wires between them were not looking too good, so spent a time cleaning them all thoroughly. End result was good - they're all working and being repeated down below. In doing that, I realised that that radar and GPS were not working - clearly, the movement (now prevented by lashing) of the radar scanner and other items at the top of the starboard aft pole resulting from the knockdown had damaged the cables. I'd wondered why I couldn't fire up the radar scanner earlier and had thought the button on the plotter was faulty maybe.
Fortunately, the AIS has an independent GPS input which is also being used by the plotter, so boat position/SOG/COG are all shown there - TG! It was nice to see wind info showing again on the chart table instruments.
While doing that, had a visit from the Pilot boat - Pilot Magnus and his crew members had come by for a quick chat! They commented on the gooseneck barnacles just above the starboard waterline, near some inlets/outlets - maybe growing inside partly - a nuisance ... but I'm not getting into the cold water here to deal with them - later in warmer water! They also pointed out that the bolts holding the top of the stern antenna support in place onto the pole were all displaced up slightly - but I couldn't move them with my fingers. Will need to look at that again and maybe lash that top plate to hold it well down.
Looked around and got out what is needed to close up the hole in the cabin roof where the air vent (dorade) was taken away in the knockdown - piece of wood, needing to be cut, a long bolt and nut and a big penny washer - will fix it tomorrow, using some silicon sealant as well, replacing present plastic taped over the hole.
Replaced the damaged mainsheet traveller line and began to figure out the lazyjack replacement - think I have line for that also. Will need to climb the mast to retrieve the end of the starboard lazyjack line
Covered one sail tear with sticky tape on both sides as the sun was setting - the sail had dried sufficiently to do that but it will definitely need stitching also.
Down below for a warming bowl of thick soup and some delicious smoked tuna - thanks, Tom and Maggie! Enough of both for a repeat meal tomorrow.
Finished checking over my food supplies and noting totals available - looking fine - I won't go hungry.
Discussed battery/generator problem, yet again. Looks very much as though the batteries are possibly sulphated due to lack of sufficiently good charging over a period - bad news.
While in the battery area, found another dry (vacuum-packed) fleece top stored nearby that I'd forgotten about - excellent! Will be added to my fleece layers - it's freezing here! Warm hat is in continuous use...

Monday morning NZT (= Sunday evening GMT) - Queen's Birthday holiday (long weekend) here in New Zealand and also in Australia and elsewhere. Very calm now and expecting a bright, sunny day - so good for getting on with sail repair and deck work - well dressed against the cold. About to run generator and watermaker and will post this report - next one in a couple of days' time, rather than daily.
Must get some breakfast and get to work!

Total distance covered from Victoria, B.C., to end of Day 239 (by daily DMGs): 19,963 n.ml. up to last distance calculation (on Day 233) + an unknown amount - but now have plotter available to do it, so will do that one evening, when too dark to work on deck. 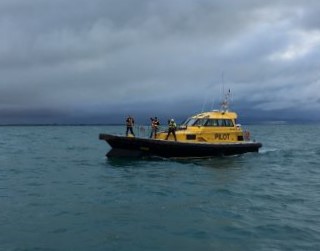 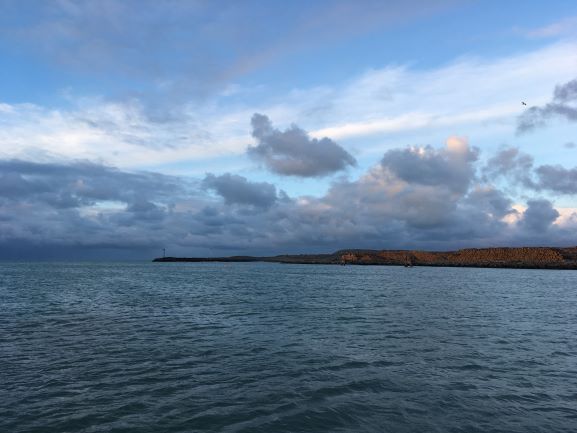