A lovely, nicely-repaired rudder, freshly Coppercoated, and with clean prop and shaft newly coated with Propspeed .....  we were 'splashed' soon after sunrise on Sat 26th November.  (I'd been busily sanding the new Coppercoat the previous evening by headlight and again in the half-light around dawn)That date was the last possible date for launching before next March, or maybe even April, in view of the tides becoming smaller over the winter here in the Sea of Cortez - so being ready in time was critical!I enjoyed being afloat alongside the dock where the dive boat 'Ocean Sport' was moored. close to the table where freshly-caught fish were weighed, cleaned and dealt with - I received a chunk of marlin one day from one of the generous Mexicans which gave me an excuse to cook some ratatouille later to go with it - lovely!Cruisers dinghying out to their boats in the Bahia, as well as pangas and tourist boats, regularly passed by and waved - all very sociable! 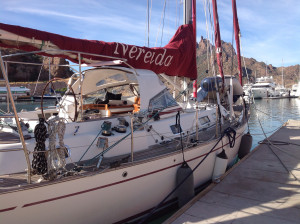 Nice to be afloat again with an intact rudder!   And the bimini support had finally been installed while on the hard - incredible... only one year later than I'd hoped!After a trip to Europe over the 'holiday' season, I'll be driven back to 'Nereida' from Phoenix by Joseph DiMatteo of Tucson S.C., ready to instal two new 150W solar panels we'll be taking down with us.  Joseph has been amazingly helpful in talking to Solar World who are generously replacing all four panels under warranty - the old ones had degraded in places and were no longer producing the power they should have been.  I'll be looking forward to seeing a big increase in the amps produced by the new PV panels to charge the battery bank.   Many thanks to Solar World and to Joseph.Merry Christmas and a Happy, Healthy, Peaceful New Year 2016 to you all!