Plenty of lovely, sunny, often hot, blue skies and a lot of travelling around over the period. Not too surprisingly, with so much else going on, not as much achieved on board as I'd hoped for.

From Westport, and with a beautifully clean bottom allowing excellent speed, it was time to travel over to Friday Harbor to get a USA Cruising Permit for the coming months. It was good to meet up with Sue & Jim Corenman who patiently waited for a very late lunch while it took a record, unbelievable, two hours to complete my USA paperwork.... I'd had to make an early (5.30am) start to avoid low water in the shallow area around the Westport Marina haulout and then spent a short time at anchor off Sidney Spit so as to avoid being headed by a strong ebb current in Spieden Channel around the N end of San Juan Island.

It was a short onward trip from Friday Hbr through Wasp Passage, avoiding some rocky outcrops around Crane Island, and on to Orcas Island for a visit to friends and a dinner party there, with an enjoyable drive around Orcas Island the following day. I had to be away before 10am to avoid a strong foul tide (flooding N) through the San Juan Channel as I headed S, through a partly-foggy Juan de Fuca Strait full of sealife - it was lovely to see so many birds, seals and sealions. (photos: Exiting S from San Juan Channel;Whale Rocks)

We made an excellent SOG (speed) in the flood tide passing by Pt Wilson, as we got close to Point Hudson. There I paused in the lovely, friendly wooden-boat town of Port Townsend, for a few sunny days - catching up with friends, getting the mainsail track insert repaired and finally retrieving doors, cushions, dinghy and outboard - all left in care of kind Rob Parish for nearly 3yrs - two circumnavigations, in fact! I had a helping hand one day from Gina who did a good job cleaning the decks of dried-on growth. (Photo: 'Fried egg' jellyfish in Pt Hudson marina) 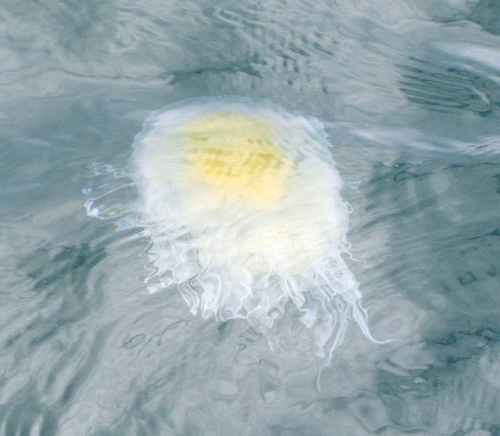 I spent a very enjoyable evening at West Sound marina, on Orcas Island, with John & Dorothy Guzzwell. Having heard so much about John over the last few years, it was a pleasure to meet him personally, although I have yet to read his book 'Trekka' in detail. Thanks, Betsy, for organizing the get-together and being such a welcoming hostess.

Another pre-dawn start the next day, clearing in to Canada at Bedwell Hbr before making for winding Active Pass on the flood tide, always an interesting, mind-concentrating passage, where I was pleased to avoid meeting up with any of the frequent, big, B.C. Ferries. (Photo: 'Coastal Inspiration') 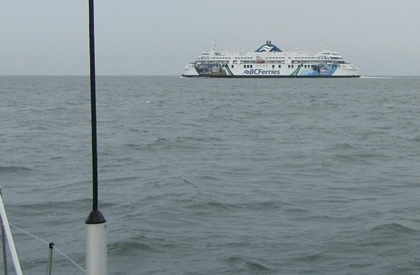 On nearing Gibson's several hours later, on the N side of the entrance to Howe Sound, I was met in Georgia Strait, not far from the harbour entrance, by a small flotilla - a lovely welcome back to Gibson's, arranged by CG volunteer Robyn with the help of the local CG & members of Gibson's Y.C. - who promptly made me an honorary member and presented me with their burgee! (Photos: Welcome to Gibsons!; View up Howe Sound) 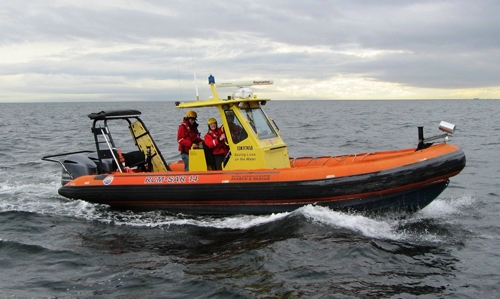 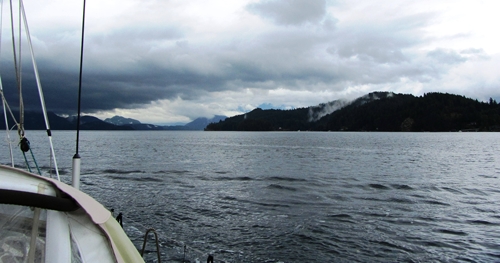 Daytimes there were mainly spent on board, trying to make progress in sorting out 'Nereida' in between lots of chats with friendly passers-by. I did manage to complete a major service of the headsail furling gear - both are now very well-greased, although a vital screw was dropped into the water.... (replaced last week, courtesy of Steve Norbury, helpful MD of Selden UK)

A few walks, in between work, with Sassie, friends Tom & Maggie's lively dog, with blackberry-picking along the way, among the spectacular, Rockies-backed scenery of Howe Sound, and time disappeared all too quickly - I could have easily stayed on for a lot longer but time was pressing & I made for Vancouver, there finally to meet up at Fishermen's Wharf, on Granville Island, after a gap of several years, with friend Kevin and his new family. Excellent fish and chips, chats to the nearby fishermen and a budding solo sailor, a quick visit to the Saturday market.... again, I could easily have lingered on in the friendly, albeit wet and thundery, atmosphere overnight.... but moved on to Jericho Bay and a brief stopover at the Royal Vancouver Y.C. to meet up for a meal with more friends.

My timing seems to have been good in that most of the Club members were anchored off over much of the summer while the docks were replaced but have all just moved back again. While I was waiting for my slip to become available, I carried out a thorough calibration of my instruments, taking care to avoid the many anchored, empty cargo vessels in the Bay as we first turned in circles and then wiggled 'full steam ahead' in the calm spacious waters north of the Club.

An early start the next morning was needed to get the timing right for making a safe passage at the end of the ebb tide (close to Low Water slack) through rocky Porlier Pass after crossing back over Georgia Strait. We were en route to Saltspring Island, the largest of the Gulf Islands, where I was due to make a presentation to the island's Sailing Club in Ganges Hbr. The sky cleared nicely, and low-lying fog cleared away ahead of us, as we made our way the length of long, narrow Galiano Island and headed over towards Prevost Island before rounding up into Long Harbour on Saltspring. There I visited friend Ann's house for tea before finishing up at the S.C. dock later that afternoon - to be met by a very friendly group of members. I had a thoroughly pleasant stay at the Club, whose members really went out of their way to help me and make me feel welcome, and my presentation was filled to overflowing, with some people even having to be turned away, unfortunately, due to fire regulations...

Nereida was in safe hands while I flew to England for the Southampton Boat Show - always an enjoyable event, with lots of boats in the water to view, activities on the water, meeting up with people, bumping into friends and getting all kinds of boat problems discussed and resolved (Harry of The Rig Shop was his usual smiling helpful self!), ...this time with the addition of frequent congratulations from people, happy to see my successful nonstop RTW completion, at last.

Autumn has definitely arrived... both in England and B.C. ... but colours on nearby young maple trees are making up for the continual rain just now. I was amazed to spot that pressure had dropped to 991hPa on Saturday night, while writing this - a major depression is passing over with strong winds expected by Sunday night on Vancouver Island.

I've finally been able to meet up with Jamie Hansen of Philbrook's, to thank him personally for being so very helpful in July. (Photo) 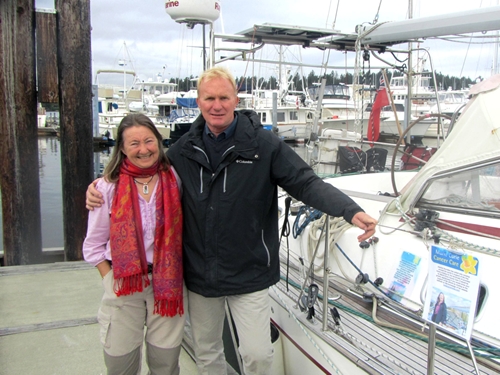 He had sent Ryan to help with essential electrical work when Chris Eldridge generously repaired the welded joint on the pole-mounted radar, damaged by Southern Ocean wave action, when the wind-generator also came off its pole & ended up terminally damaged. I came over on Friday to Van Isle Marina in Tsehum Harbour, where Philbrook's are based, and was shown around the workplace and yard - they have a well-deserved reputation for excellent work.

This coming week I shall move on to accept the hospitality generously offered by the Royal Victoria Y.C. in Cadboro Bay, from where I plan to leave around 11-12th October to sail S well offshore to San Francisco - with a new mainsail, the material of the old one having given up the ghost after two circumnavigations.

In the meantime, I've lots to do on board, to be ready for passage-making again.... and I'm also busy preparing for the Canadian ham radio exam next Friday, preceded by a presentation at Sidney North Saanich Y.C. at 7pm on Thursday.  (I just heard that evening is fully-booked and I've been asked for a second evening to repeat the presentation...). It's a busy life, still!