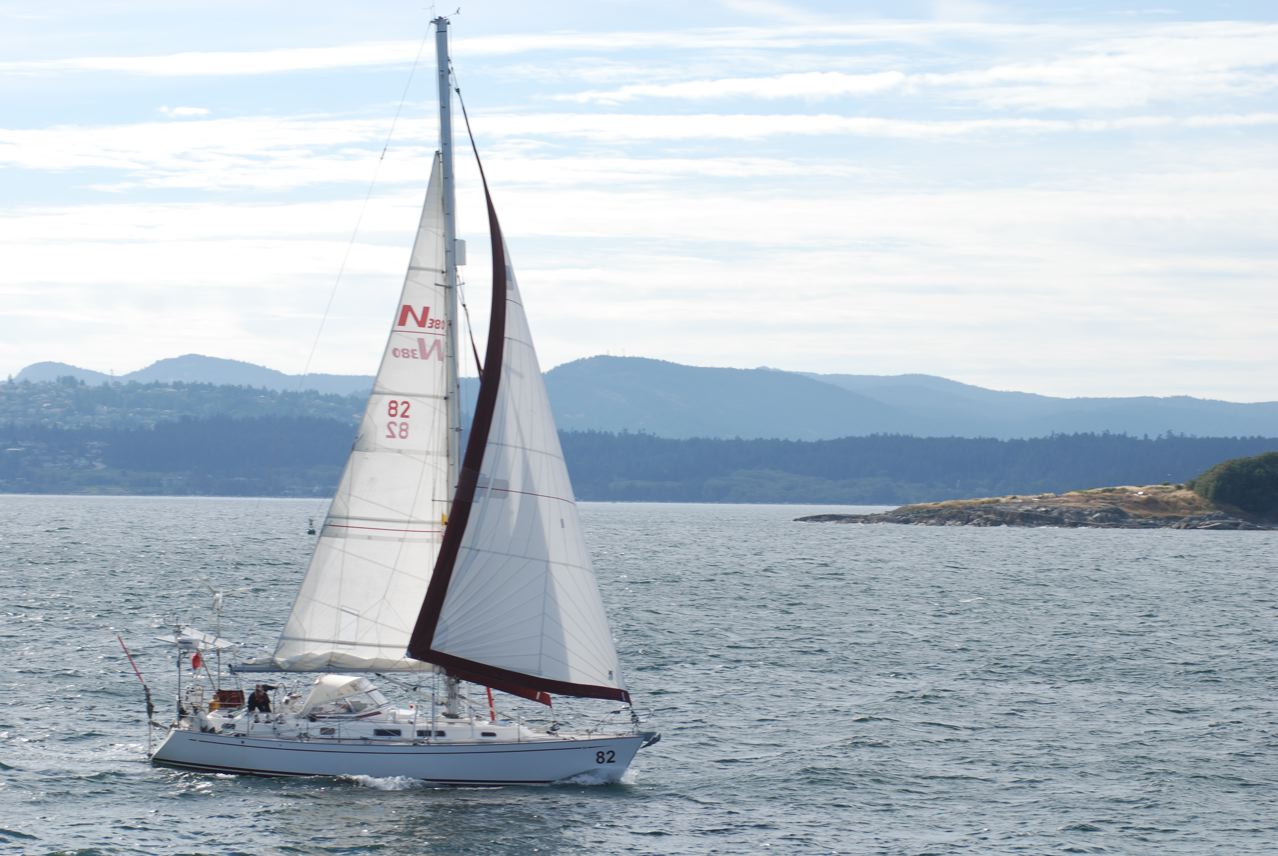 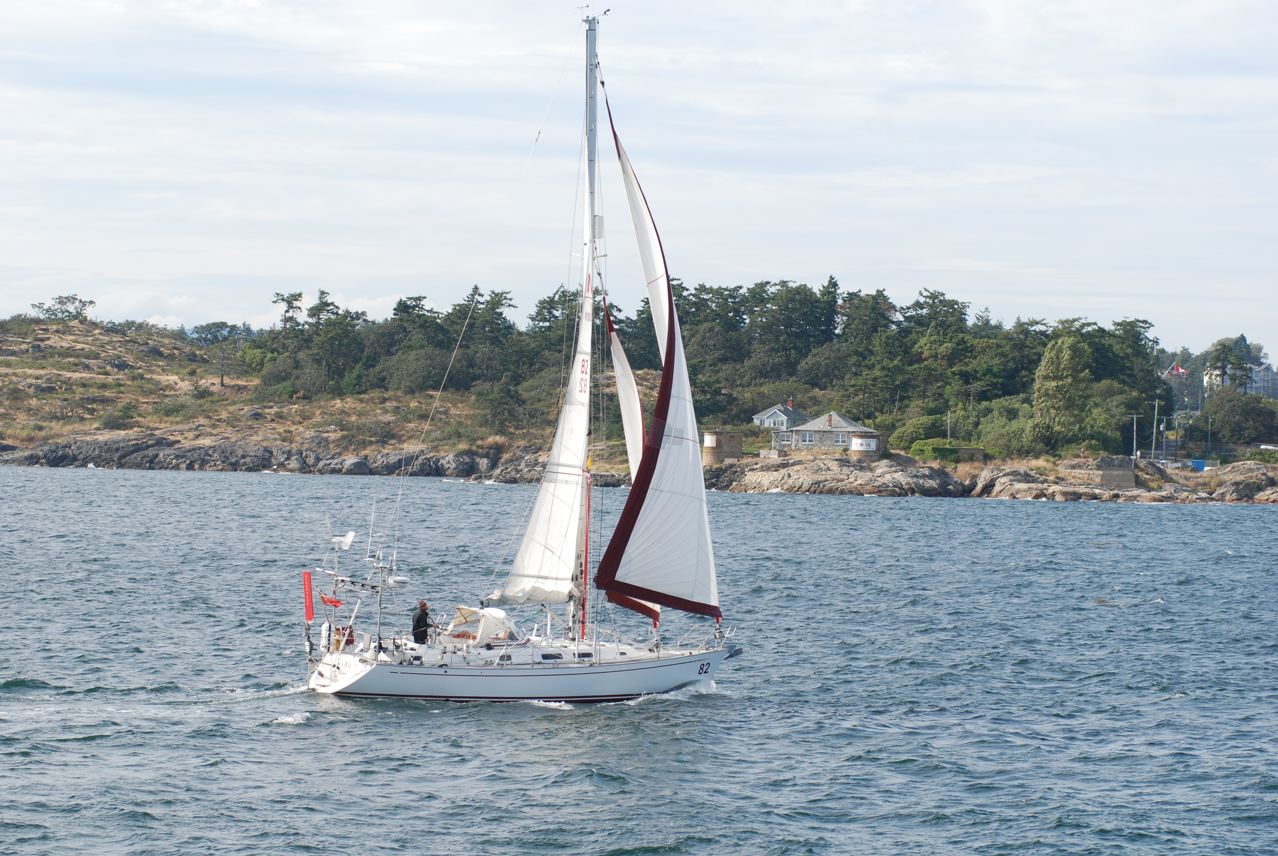 Over the weekend, sailed on to a baking hot Friday Hbr to clear US Customs (charged $19, to my surprise! I'm sure now that was wrong, in view of my Cruising Permit...) & met Sue and Jim Corenman (who run Sailmail for cruisers) who sailed out to accompany me in - a lovely gesture! 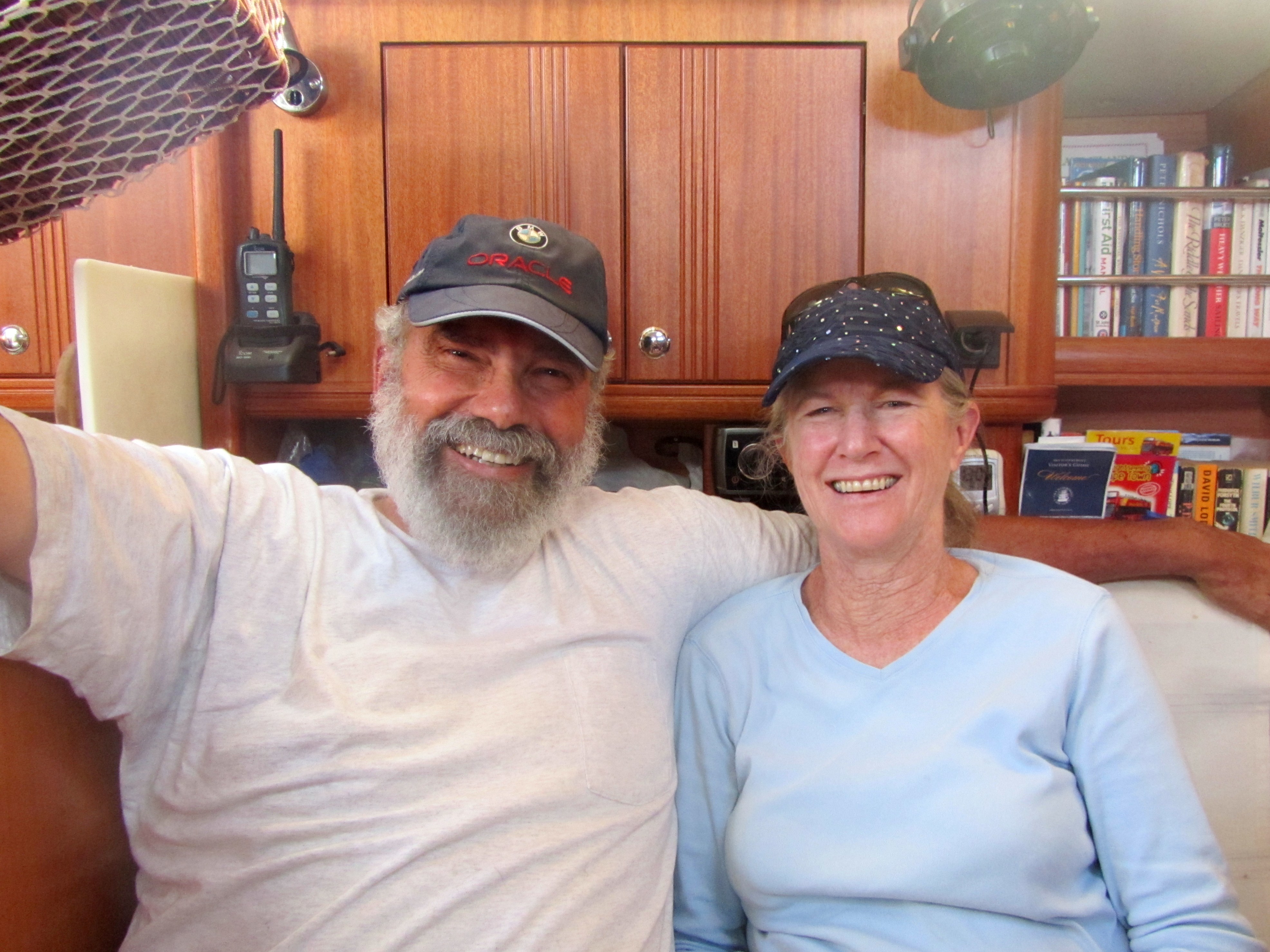 After an enjoyable dinner with them, I met up with a friendly group of boaters from Canoe Cove (nr Sidney) and Cypress Mt (nr Vancouver), celebrating the imminent wedding of one of their number, Mike (on a lovely old wooden boat 'Moonbeam' that he'd renovated).

On Sunday, I was collected by Brad to be driven around for a short tour of San Juan Island & then over to his house in a forested area for lunch with his wife, who then took me on to Roche Hbr to meet friends Laurie and Warren for an evening meal and chat... lots to catch up on!

Finally arrived in Port Townsend on Monday 6th August to 'complete the circle' RTW to/from there - had a warm welcome from several people who came to greet me on arrival in Pt Hudson: 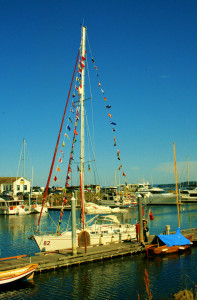 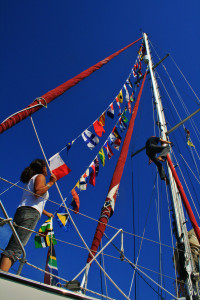 - nice to meet up with old friends again and had a meal with some later.  (Flags got slightly tangled on being hoisted, so had to climb mast to sort them out.)   Met Penelope who's organizing the renovation of the 'Felicity Ann' which was the boat sailed solo by Ann Davidson across the Atlantic from Britain quite a time ago. She's using it as a 'vehicle' for helping young at-risk teenage girls and teaching interested women basic boatbuilding skills. (She kindly invited me to use her landline for two 'Breakfast Show' telephone inteviews the next morning - had to get up at 5.30am to keep to the CBC radio presenters' schedule!)

Was pleased not to have sailed over on Tuesday - thick fog in Puget Sound area for most of the day!

Saw Carol Hasse about mainsail repair & servicing and Brian Toss wandered over, keen to check my rig tension and mast shape - generously gave me an early 'Christmas present' of a nice Harken block for the furling line lead - felt it would ease my effort a lot when furling if I had a decent block close to the drum. Friend Dianna helped clean up around my Lexan washboard edges and nearby woodwork after removing the duct tape that I'd used to prevent water getting below should we be pooped on passage from Tasmania. (Getting over that fixed, high washboard has been a definite hurdle for several of the people visiting me down below!) Had interviews with local reporters for publication in Wednesday's papers and met up with Rob who's kindly been storing boat items not needed for a nonstop RTW attempt - left most of them with him until my return next year but thinking about possibly taking dinghy & outboard with me in October.

Headed back over to B.C. on Wednesday morning in weak sunshine, initially making good use of a helpful ebb tide, across a near-deserted Strait of Juan de Fuca towards Haro Strait and then Sidney, arriving well before sunset. An enjoyable, relaxing passage past San Juan Island and a variety of smaller islands with lots of seals and seabirds around - little black and white murres, in particular, are everywhere - there's lovely, gentle cruising to be had in the San Juans and Gulf Islands around here.

No wind until near to the marina, when it really got up and made berthing difficult - good to have friendly boaters nearby (twice over) to help... Had to stop at the Customs Dock to clear Customs into Canada by phone (!) and then on to my allocated berth where I finally made good use of my bowthruster a couple of times - I normally refuse to use it on principle (or even totally forget I have it!!), feeling I should be able to manoeuvre my boat without such things... Hoisted my celebratory courtesy flags again, as well as 'dressing' 'Nereida' overall - she deserves it! She looks great - especially in the bright sunshine of Thursday morning. On Friday I'll be sailing a short distance around to nearby Canoe Cove to see Brent of Blackline - another excellent rigger who'll be checking over the rig in detail. He already came up with several thoughts on upgrading below-par/worn blocks and sheaves & other items on deck when visiting the boat in Victoria very soon after my arrival. (Several sheaves are totally worn and need replacing - not up to Southern Ocean use!) I'll also be trying to sort out my battery replacement and getting on with a whole host of other jobs on board. It'll be a busy time!