4:15pm Just went up on deck - and disturbed a tiny gaily-coloured bird - a goldfinch. One of a pair, it turned out... they investigated all around on deck and in the rigging... and finally chose the protection of a fold of the mainsail near the mast for their overnight roosting place as the sun was setting. I went forward to watch a large group of dolphins cruising in twos and threes around us as the finches were settling down .... and also to double check on the pair's hiding place. As I returned to the cockpit, I noticed a solitary greenfinch - not so brightly coloured. Finches often move about in mixed flocks but I was hardly expecting to see the birds I used to see in my back garden in London over the winter here in the S. Pacific on board Nereida for the night! The greenfinch was far more unafraid than the goldfinches - perching on me and my camera as I was trying to take photos of it in the cockpit. I put out sunflower seeds and water but so far they've not taken any - I'll look in the morning. 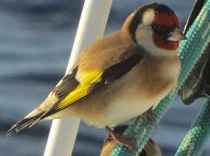 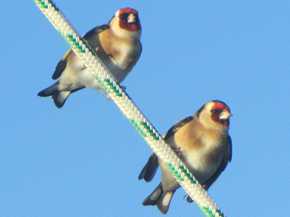 A large, bright moon rose in the E as the finches settled down for the night and in the W, the sky and a few clouds were still coloured rosy-grey. Just after dawn this morning, I'd gybed the mains'l... and later gybed it back again to resume being goose-winged almost DDW, with the genoa poled out to port, as we tried to keep a course just E of due N in a light S wind for the rest of today.. Weather next week is looking a bit threatening in places ahead, with typical Tropical nasties brewing up as we head to just W of Fiji, but hopefully we can avoid the worst of them. Our course is pretty well on the Gt Circle route to the Strait of Juan de Fuca at the moment, but that probably won't last for long, with weather systems to avoid or take advantage of, over the coming weeks ...

I wasn't looking forward to dealing with the galley gas supply problem, feeling sure the pipe connections would prove mixed Imperial and metric and so cause me a big problem - always assuming I could undo the connections in the first place. But it turned out to be a simple fix - the connections unscrewed relatively easily - too easily, in fact - I think the connections, with no PTFE tape having been used, had possibly been leaking... there'd been a slight smell of gas each time I'd opened the locker. The solenoid valve was easily removed from between regulator and gas supply pipe and the direct connection was made with very little problem - the same thread exactly - but I used some PTFE tape specifically for gas fittings to avoid leaks. So I'm enjoying having the regular gas supply to the galley flowing nicely again, using the manual shut-off tap by the stove in between uses..... and the little camping stove has been put away for another day. It's proved a really useful item to have had as a back up but I don't have too many of the disposable cartridges it uses.

I felt sure I'd resolved the solar panels' wiring problem last night, but was not too pleased when, on checking this morning, clearly the additional panels were making no difference to the input charge. As usual, first stop is to check any fuses in the circuit - sure enough, the 20A blade fuse had blown - quickly replaced - and our input to the batteries jumped up from 7A to 14-15A - lovely! The panels can only be tilted fore and aft, not sideways - but that's still a lot better than being fixed horizontally.