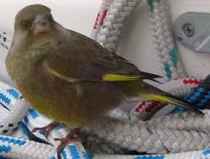 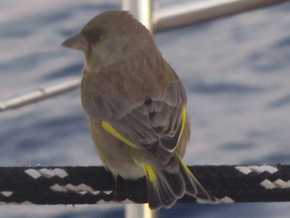 Another very pleasant day with lots of sun, blue skies and not much cloud, although building a bit more towards evening. A bright moon - still almost full and very bright, making deckwork overnight very easy. Seas have been up more today, becoming quite choppy.

Spent a time again, checking route possibilities and looking out for small, hard obstacles in our way north - lots of reefs, atolls and islands around to avoid. Also downloaded several weather faxes... High pressure still very extensive where we are.

The greenfinch has taken up residence in the cockpit area, after I persuaded it to take some sunflower seeds early this morning and also some water - so its survival chances are much better and it's been looking quite perky, eating frequently over the day. It's sleeping overnight on the cockpit coaming, beside the sheet winch, so I'm leaving taking in some genoa until morning -seems a pity to disturb it! I was sad to find one dead goldfinch on deck this afternoon - I'd thought the pair had flown off early this morning, after resting overnight - maybe the other one made it safelty to an island somewhere, but I don't think they'd eaten or drunk any of the seeds or water I left out overnight....

We were goosewinged until midday but the wind slowly backed some more, so we finally had to lower the genoa pole and gybe the mainsail - we're now on a broad reaach, on starboard tack with both sails over to port. Speed had slowly increased today, as wind strength went up - but looking at the weather ahead, it now seems that we don't want to make too good a speed... An area of strong convection lies ahead, about 300 mls away, for the next 3 days or so, so if we can reach that point in 3 days' time, with any luck most of the strong weather (30-40kt winds and heavy rain) will have died down... Means keeping our speed down to under 4kt, so I furled in some genoa - ironic to have to be reducing speed when we're finally able to get going nicely!

Making some regular, enjoyable radio contacts over the day. 20m is noticeably so much clearer than 40m, with very little noise - a pleasure to use the band. Several boats I know are checking in, as I do, with the Pacific Seafarers' Net daily - gives an easy way of knowing exactly where they are as they head their different ways and we can easily exchange greetings or news when we wish.

Finally got around to removing the radio and Pactor modem to check on the connections behind, with calmer conditions. All connections were looking good and the problem I have is still there - with automatic changes of frequency still not happening. I'm having to input frequencies manually for emailing or weatherfaxes - a real time-consuming nuisance!

Had a minor incident with the container vessel "HS Berlioz" on a converging course tonight - came far too close - told me on VHF 16 that it would change course to avoid me - I asked it to pass our stern - it did no such thing & kept straight on. Taupo Radio were contacted on my behalf and spoke to them. They could have easily done the seamanllike thing and altered course early on if they'd wanted to.