×
Friday 31st May 2013
Had a nice meal last night to celebrate crossing the Tropic of Cancer.

This has been a very slow but pleasant day, full of birdlife under sunny skies with a lengthy, very sociable radio session on 15m from 0030Z onward.

Overnight, three boobies roosted on the stern arch - one red footed (see photo), one all-brown immature and one all-black(including a black breast), except for white under body, light bill and pale green-yellow feet (brown booby?). Surprisingly, with 'lively' seas, they managed not only to hold on (two on solar panels and third on aerial platform) but they also got back after losing their grip later, despite the dark, moonless sky.

Coming up into the cockpit early this morning, I found the immature booby perched on a starboard wench - it didn't seem much bothered as I checked things over and eventually flew off after I'd got some close-up photos.

I've been bird-watching a lot, after cutting the toes off a worn-out sock to place as protection over my left fore-arm which has become photo-sensitive. The skin got damaged when I serviced the main port wench in bright sunshine recently and now reacts very badly to sunlight. (I'm taking a mild course of antibiotics which has definitely helped.)
Frequent sightings of Albatross today: 2-3 Laysan and 1 Black-footed - all dark with white at the base of tail and bill. Every so often, 2-4 terns have flown by noisily and boobies have been seen regularly. One red-footed booby is again roosting overnight on a solar panel. 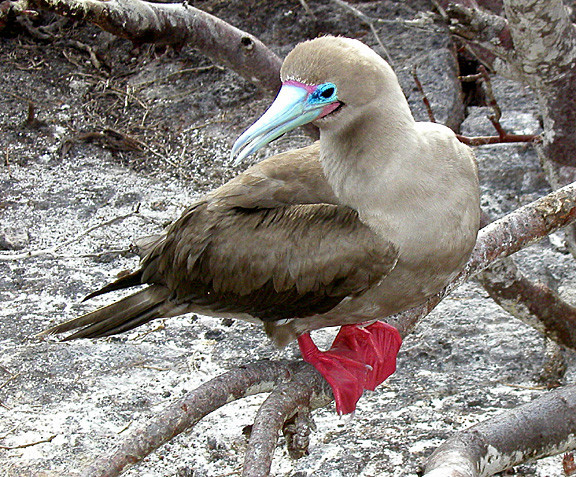 We're are slowly passing Lisianski tonight and should be clear of it by the morning. Light wind is likely to continue for the next day or two while we get N of Midway Island.

(Lisianski Island is named after Yuri Feodorvich Lisyansky, an officer in the Imperial Russian Navy. Lisianski was the commanding officer of the sloop-of-war, Neva, an exploratory ship which ran aground on the island in 1805. Neva is the name of the dangerous shoal SE of the island.)

For my positions and track, see:
www.svnereida.com - 'Travels' - "Where is 'Nereida'?"
and/or:
http://www.exactearth.com/media-centre/recent-ship-tracks/tracking-nereida/