Thursday 8pm Fog disappeared just before sunset - nice not to have the damp air and to see clear sky above! Expecting Cold Front to come through in a few hours' time with 15-20 kt wind from NW, backing to SW quite quickly - will need to gybe the genoa but should make better speed for a time. Noticing more of a swell now, ahead of the stronger wind.

Friday 1am Wind behind Cold Front has backed to W/WSW so gybed the genoa and changed course from ENE to ESE - we'd followed the wind around, being under Fred's wind steering, so time to get back on course. Wind expected to back to SW by around dawn and on to SSW later in morning. Moon shining through cloud layer (foggy?) made a headlamp unnecessary - bright enough to see by. Very moist air and wet on deck.

7am Sunny sky with some cloud and no fog around. Now in SW wind but expected to back more - to SSW.. Made 5.7kt for a time, just before, but now making 4.7kt - wind varies a lot...

8am Well, so much for clearing skies and sunshine - back under total grey cloud cover and moisture in the air - but wind is up, so making around 5.7-6 kt now.

2pm Bright sunshine and a few fluffy white cumulus. A few prions and white-chinned petrels - definitely no short-sighted ones...! Some sail trimming, as always, made for better speed in the S wind. Seas are a lot bigger and closer - so very rolly, especially since they're on the beam and steep.

Tried contacting the South African Maritime Mobile Net (SAMM Net) at 1100Z on 14316 but nothing heard - maybe they weren't expecting my call? Still a good distance away but a good rig should enable contact. Will try again tomorrow.

5pm Frequent adjustments of wind-steering (Fred) needed in shifty wind - partly caused by nearby clouds - some grey and threatening showers, although none have fallen so far. With S wind bringing colder air, air and sea temperatures are down - definitely feels cooler on deck now, even when sun is shining. Seas still well up although wind has dropped quite a bit.

Frequent birds around are prions and petrels - still none with spectacles, though...! 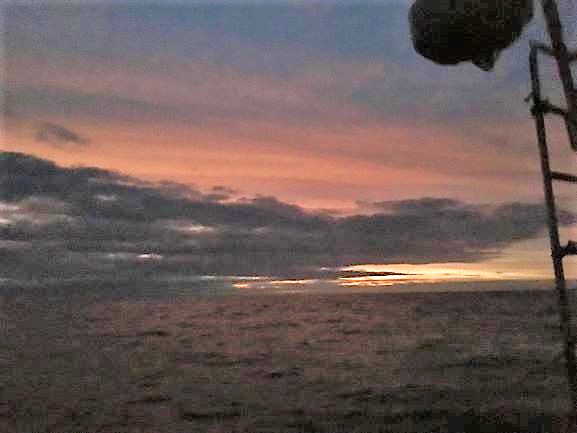