Trying to avoid heading any further N - otherwise, will end up with headwinds in a High pressure area in a few days' time. Bad enough that we'll have light winds without the added problem of them heading us.

Hoping the High pressure area will give a chance to repair mainsail.

Saturday 3am Just spent a time adjusting Fred, up and down several times... Difficult to get it right in such light winds - we're only making 3kt, often less.

Chilly air tonight - only 13.3C, cold compared with several nights of 19C. Antarctic cold air coming up on the S wind.
Bright moon shining through thin cloud layer, Southern Cross high up in clear view, Venus and Jupiter close together, both very bright in the SE - a lovely night but cold.

Was nice to make quite a few familiar radio contacts on 40m earlier, from both N. and S.America and Switzerland also - many sending encouraging good wishes!

Back to my bunk for more sleep....

5:45am Up to check on course being made and send off weather and position report while radio contact possible - not long after dawn. Sky mostly clouded over, speed 2.3kt, making way on course - roughly. Swell down in light wind, air temperature 13C, air temperature 16C (56F/61F).

9am Bright, but no sun visible - a cloud layer covering the sky - not quite foggy but almost. I'd been hoping for sunshine and maybe even warmth - even dreaming about it! - this is not going to help dry the sail... Air temperature 20C/68F so maybe, being optimistic, the sail might dry out a bit if I release the sail ties and expose the torn area - at least there are no grey rainclouds around to threaten rain just now...

Almost no wind - we're only making around 1.2 kt ... soon we'll be drifting in circles. I'm amazed that Fred has kept us roughly on course up to now. Looks as though what wind there is is coming from SSE - makes 098T course difficult.

Time for breakfast and hope the sun gets out while I'm having it. Feeling frustrated!

10am AIS alarm went off - cargo vessel 'Luenho' heading towards us and making 12kt on way to Pt Elizabeth in S. Africa - coming to within 0.3ml. Called them on VHF - very pleasant officer with good English said they'd keep clear. Later: Can see them diverting to starboard so they pass S of us - excellent!

Went to check sail and open it up a little - pleased to find it's actually feeling fairly dry but needs trimming of loose frayed ends with scissors before doing anything else - step 1 for today...

Can see large cargo vessel 'Luenho' on S horizon, passing upwind of us - will be just over 2 miles away at closest point.

3pm Got started very soon after 10am - trimmed loose threads and then set to with Gorilla tape - REALLY difficult perched up high, even though the swell is only 5-6ft/2m. Had to lean on sail on boom for a stable, secure position to 'pre-unstick' the tape, it sticks so well to itself on the reel, and then tape was stuck in place in overlapping sections. If dealing with the one side wasn't too bad, the other side was that much more awkward to access... Very slow going.

Have taken a break now to check on our course (actually OK - amazing!) and have a drink, having taped about half the tear on both sides. Will try to complete this initial taping and see how much tape is left. Next section of tear will be even more demanding since it's over the sloping, slippery windscreen area with no handholds other than the tied-down sail itself and/or boom.

Not totally convinced the taping will last very long - but we'll see... Hope to reinforce with tape around leech and at right angles onto body of the sail.

Wind is dying which in this situation is good since should mean swell will stay right down. We're making 1.8kt - but on course!

3.30pm Well - we were on course! Was about to adjust Fred to sail off the wind more. on seeing us heading SE.... but then saw we were almost back on course again - good old Fred! At 1.5kt, it doesn't really matter where we go - it's such a small distance over a short time - but it's psychological - I just prefer to keep heading in the right direction!

6.30pm Finished with initial taping - 3/4 hr before sunset. 7 hours of work. All torn edges now held together on both sides. Needs reinforcing to help it not to come undone. Lower/2nd batten end area slightly torn - will need extra reinforcing. Tied sail to boom for overnight.

Wind came up a bit, along with swell, as I was finishing - but then died with sunset - so furled in genoa to stop it flapping uselessly and wearing itself out.

Will be having a nice 'ready-made' meal tonight to celebrate getting well started on mainsail job.

While I was finishing, heard an eerie, loud, quite long call - must have been from a large bird although I couldn't see one - came twice. 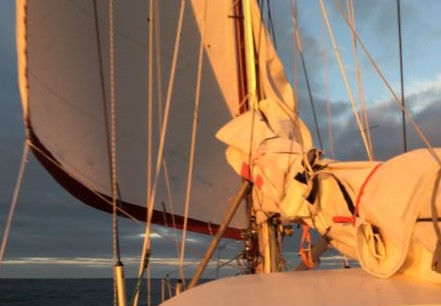 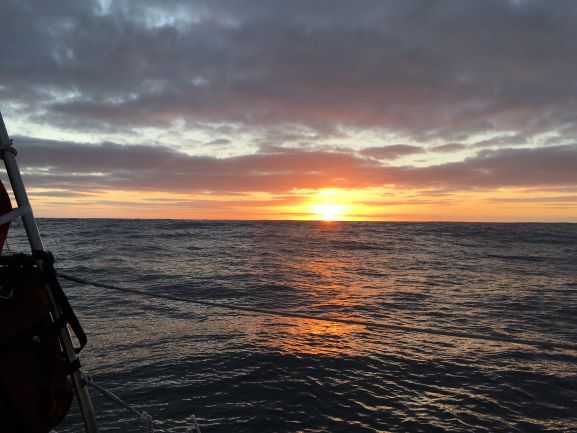