Monday 7:30pm Sunset a short while ago but grey clouds on W horizon. Lots of birds flying around near end of day - albatross in distance and a group of white-chinned (spectacled?) petrels close by - couldn't see well enough to determine if they had any white around eyes.

Quite big SW seas on starboard beam and wind from S - likeyl to drop slowly overnight to well under 10kt by dawn.

Will bear away to pass further off Gough Island - since I won't be able see much, if anything, in darkness of night, best to stay well clear.

11pm Clear sky overhead - lots of stars but no moon. Heading off Gough Island by about four miles. No hazards - coast is very steep-to and ocean floor drops to 2,000m or more where we'll pass by. Slow progress at 2.5kt!

Tuesday 2:30am Passing the north of Gough Island - visible only as a dark high mound - its mountains rise to nearly 3,000m - no lights since uninhabited except for lots of birds and a S.African scientific team of 10 people in their base halfway down the E side of the island. A waning crescent moon, hazy behind thin cloud, throwing very little light over the sea. Light wind, slight swell in the lee of the island, making only 1.2kt.

Just made several familiar contacts on 7160 - excellent propagation - and about to get back to my bunk for more sleep.

5:15am Sun hidden by mostly grey cloud everywhere. We've moved so little over the hours of darkness that dawn has come - and we're still only 4.5ml NE of Gough Island - within sight of its rocky outline and with birds flying around - an albatross came close as I took a photo of the scene. We've drifted 1.6ml in two hours... But I need more sleep - so back to my bunk after making my position and weather report slightly earlier than usual....

7:30am Was woken with feeling something was amiss - we were drifting N in light wind - now from SE Can't make our preferred course to ESE - being forced NE at best, if very close hauled. On alternative tack, would head towards Gough island.

8:20am Tried tacking around just to see if we could make it - sure enough, we were heading SW - straight to Gough Island - on a lee shore and with wind likely to get lighter as we got closer - not good. So, reluctantly, tacked back around onto starboard tack and onto NE course.

Had hoped we might clear the island but it was too dangerous to continue that way - wind not strong enough to give us a good speed to make it safely. Want to get S if possible to avoid the unfavourable winds above the centre of the High we're in now. Possibly, once further from the island, we can tack around to get S. Wind is likely to back into E later, making that more of a possibility.

Lots of different birds around - and, being close to land and nesting sites, there were skuas, harrassing smaller birds for their catch, and lots of terns - so graceful! - along with the occasional albatross - one dark brown juvenile seen.

Still didn't get much sleep so will get to my bunk - need some more if I'm to work effectively and seems we'll be in this High, with light winds, for a day or more...

10:50am Well, that didn't work! Just lay there thinking about mainsail and trysail 'challenges' and worrying about which way we were heading. Then saw we were headed NNW - so got up to try to get us headed in a vaguely East-ish direction - tried gybing around again but we headed towards Gough Island (now still only 11mls away to SW) so, again, that was not good. Finally, we're headed NNE at 1.7kt.

Had a look at what is involved in hoisting trysail which I dug out of its locker yesterday. Means undoing all my very well-secured lashing of kicker/vang connection to mast, as well as the boom gooseneck lashing plus a couple of other lines, since the lines run either over the trysail track or through its stopper. I'll have to use the mainsail halyard since the topping lift is holding up the boom aft end - that's another challege in rolly conditions - releasing the halyard from the mainsail and using it to hoist the trysail. That will get interesting, as I perch on a mast step for access to the hayard shackle at the head of the sail without letting go of the halyard when I get back down...

The idea of hoisting the trysail was to give a bit more speed, or for use in strong conditions with the staysail, as well as helping balance the genoa better, and also give a possible heaving-to option - which I don't have just now.

Having breakfast while I come to a decision - must keep my energy up.

Decided to undo lashing etc and try to hoist trysail - gives time to finish off the mainsail repair. More tape needed there (at right angles to edge) and then some stitching, maybe of fabric over the area around the leech and onto the sail body on both sides ('tabling?).

These High pressure 'work windows' come quite regularly and I don't want
to hoist the main before I think the repair will survive - too much time and effort will have gone into it.

Looking forward to a good sleep!

Trysail now hoisted and genoa furled in since early afternoon - waiting for wind. Presently drifting N at 1kt in a High pressure area.

Lots of different birds here and many are curious - fly to the boat to check it out. Pod of Dusky dolphins came cruising by - Quite different from any I've seen before. identified for me while chatting over radio to one of the scientists on Gough. Was delighted to hear the RSPB in UK are funding an eradication program for the mice on the island who are threatening the Tristan albastross with extinction, otherwise... (See www.goughisland.com)
Just when battery went dead, a young albatross came and landed in the sea very close by - looked at me, on deck working, with interest....

Position & weather report, for 1900 GMT, posted to Winlink.org and
Shiptrak.org (using my US callsign KC2IOV): 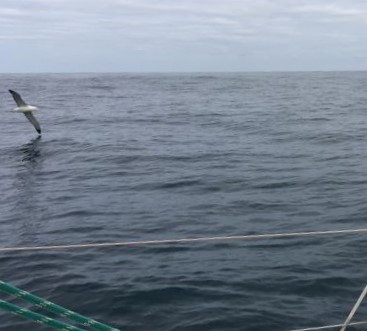 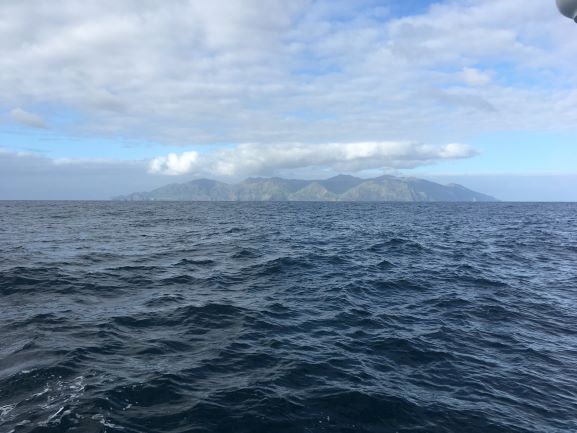 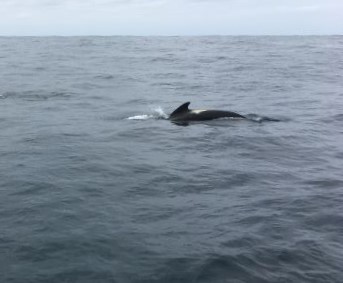