Wednesday 2am Still drifting in no wind, within 16ml of Gough Island. Poor radio connections tonight - lots of static and often difficult copy. Sent position and weather reports early, while a good radio connection with shore station was available. Back to bunk for more sleep.

8.30am Took a time to be sure wind was definitely up and then get organised but we're now underway again - a light wind has filled in a bit from NNE, and it's backing and increasing slowly Sky clearing to give blue sky and sunshine between fluffy, small cirrus. Group of terns came by with their excited, high-pitched calls and a parent and young albatross soared by as lovely, green, mountainous, wild Gough Island faded into the distance.

3:50pm A beautiful day! Would be nice if we were going faster than 5kt but... Bright sunshine, sky partly covered with a thin cloud layer that just spread in from the W. Wind from NNW around 15kt, I think, and we're sailing pretty well due E.

Just spent a time in the cockpit watching the birds around - several Antarctic prions - lovely colouring - all blue-grey on top, with darker grey & black markings, and mainly white underneath. They swoop around to gain height and then dip down to the disturbed water astern.. over and over, soaring so very close. A big, heavy-looking Wandering albatross glided by - white body and dark upper wings. Several petrels.. I could sit and watch them for hours...

Had a really good 'catch-up' sleep earlier - couldn't believe it when I saw I'd woken up just before 2pm, having got to my bunk soon after 9am - that's five hours of almost solid sleep!! Could only do that knowing the wind would be very steady with no big gusts or wind shifts expected and knowing no other vessels (or land) were around. I'd been very short on sleep yesterday but just had to keep working, to take advantage of the relatively calm conditions while they lasted - although I have to admit that having such a variety of so many wonderful birds attracted to 'Nereida' was quite a distraction at times. Allowed myself to stop for a few minutes every now and then to watch an albatross, or a Great shearwater, or the terns - even a skua, harrying a smaller bird for its catch.

Was very amused by a young, brown and white albatross when it plopped into the water very close by and gazed at me as it rested, totally unafraid - almost as though it expected me to feed it. I finished work on deck just as darkness was falling - good timing!

We're getting close to being in GMT (Greenwich Mean Time) time zone - the 'marker' is at 7*30'W and we're not far from there now. (Each time zone is 15 degrees of longitude wide.)

7:15pm Clear sky above but a big bank of grey cloud coming over slowly from SW - totally hiding the sunset. Several birds around as light fades. Cooking evening meal before darkness sets in. 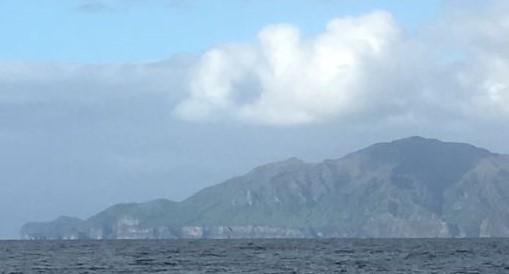 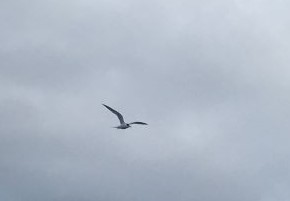