Monday evening - very grey cloudy sky and gusty wind from WNW - making around 5kt on ENE course. Difficult to head downwind in swell that knocks the boat around and causes the headsail/genoa to collapse at times.

Tuesday 5am Sky has just begun to get light - dawn is breaking but raining quite hard so total cloud cover.

Cargo vessel 'Urja' passing by to the N, on its way E to Singapore.

Radio sked on 7160 from 0310Z - lots of N.American contacts, from Newfoundland to Maine to Florida, as well as Argentina and S.Africa.
Making 5-6kt in NW wind on very broad reach. 160 ml from passing S of Cape Agulhas (and 90 ml from passing S of Cape of Good Hope).
Downloaded emails via Winlink using a shore station near Halifax, Nova Scotia - quite a distance away! (Thanks, Ian, VE1YZ!)

10:30am Rained stopped some time ago but it's still grey and cloudy. Making 5-6kt in W wind. Sun tried to get through a thin overcast layer earlier and it actually brightened up quite a bit, but it didn't manage it and the clouds are bigger and greyer now.

Furled in some more genoa - down to '2nd reef' now. Seas have built quite a lot, with wind having increased to around 20kt, and are every 6-8 seconds, steep-faced and about 3m/10ft or more.

I'm expecting to pass the two Capes before nightfall tomorrow evening (Wednesday), if present speed keeps up. There'll be no sighting of them since we're well over 300 mls S of the coast.

Good Hope comes first and then Agulhas - the Southernmost tip of Africa - actually hardly deserving of the name 'Cape' since it's just a lot of sand dunes. Good Hope is far more dramatic and scenic - a proper high, rocky headland jutting out, with rocks nearby to avoid. Sailing S from Cape Town to Simon's Town, where a big S.African Navy base is located, means passing around it since it's at the N end of the entrance to False Bay. The navy base, and Simon's Town also, is a historic place, dating back to the 1800s. It's ahort distance from there to a nature reserve where African penguins have their nesting burrows - very similar to the Magellanic penguins I saw both in the Beagle Channel in S. America and on the Falklands.

1:20pm Was just beginning to give my position to the S.African Maritime Mobile Net at 1130Z when I had to get on deck quickly - the wind had increased a lot, the genoa was backed and we were heading S! In the big seas, we were being constantly thrown around as a steep wave carried us with it and the strong wind made it difficult to recover - being on a broad reach adds to the difficulties, even though I'm trying to make sure the angle to the wind is better for dealing with the swell.

5pm Still very rough - and looks as though the Agulhas Current is the culprit - a strong current sweeping down the E coast of Africa and continuing out to where we are. I've been noticing an increasing angle between our heading and our COG - a lot more so today - due to the current trying to oppose our direction of travel - we're trying to head E and it is coming from the E-NE. It's making life very difficult - cutting down our speed a lot and causing very big, steep, rough seas....

Just to add to the problem, the wind is slowly backing into the SW - so more positively opposing the current. We'll need to gybe soon if we're to maintain any kind of easterly course. I hope we don't get swept S!

Hope my expectation of passing the Capes by tomorrow evening works out - our speed is well down and the wind is forecast to lessen - we'll see what tomorrow brings! 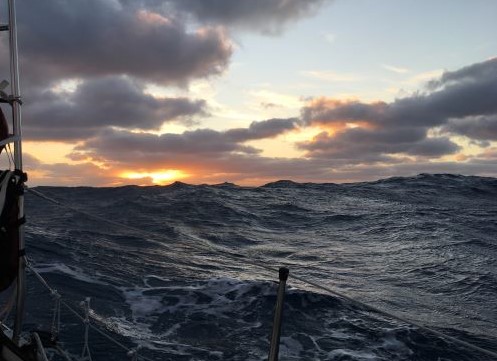