Tuesday 10pm Finally gybed onto starboard tack under a mainly clear, starry sky with bright half-moon lighting up the waves approaching from astern.. The air feels warmer and sea temperature has got up to 28.7C - the Agulhas Current is bringing down warm water from further north. Wind has eased somewhat, so seas, although still big and close, aren't often tumbling as they approach. We're still being tossed around a lot but the seas are on the quarter so not so much of a worry.

Still being slowed down by the current and course still being affected as well - boat heading is 80T but COG is 100T with WSW-SW wind. (The opposite effect to leeway which is downwind.)

Time for sleep - this was a very stressful day!

Wednesday 4am We passed S of Cape of Good Hope about one hour ago. Day just breaking - first light. Waypoint due S of Cape Agulhas is under 65 miles away, so should be passed later today.

Seas still big but well-spaced and not throwing us about quite so much, with very little surfing on a passing wave now, although still plenty of vigorous rocking around - having to hold on carefully when moving around.

Unfurled rest of genoa in SW wind of around 12-15kt - making 4.6kt, heading 097T - trying to edge a bit further S from 40S in hope of keeping more wind - forecast to die slowly over next few days - there's a big 'wind hole' that we're going to be caught in soon, just E of here - a H pressure area. In fact, weather a few days ahead is a big mess of Highs and a small Low - will be difficult to make good progress E.

Still seeing the current affecting our COG (course over the ground = actual course being made - different from boat heading).
Several radio contacts made tonight to US, S.Africa and Argentina (Juan, LU4VL has been very regular!) Good propagation on 40m at this time.
Back to my bunk for a little more sleep.

Midday A lovely sunny morning with some scattered cloud and good wind from SW-WSW - making 6.5-7 kt at present, broad-reaching on starboard tack.... Having a great sail today - good compensation for yesterday!

Trying to keep in good wind - a small band of westerlies around 40-41S - looking good for next few days. Agulhas current is supposed to be around 4 kt when I pass due S of the Cape - between 20E and 21E. I'll be looking to see what effect it has - 4kt is a lot of current!

Wind has been slowly increasing over the morning but seas not too bad, although a bit rolly quite often. Even made a fresh coffee - lovely!

WP due S of Cape Agulhas is just 30 miles away now - should pass it around 5pm LT if keep up present speed. I had my doubts yesterday as to whether I'd manage it! So those of you at my 'Second Great Cape Party' (at RVYC tonight) can party on - enjoy! Thanks for being there - I'll join you briefly at 8pm PST. I'll be having my own party here on "Nereida" once I've passed Agulhas - as usual, everyone is invited to join in and raise a glass with me! Cheers!

BTW, I gather there's been heavy snowfall in Victoria and elsewhere - from Vancouver & Gibsons to Nanaimo & Mt Washington - so maybe we'll be toasting each other in your homes tonight!

Cape Agulhas was passed at 16:33:46 GMT! We're now officially in the Indian Ocean and enjoyed a first sunset there tonight! Party time!

8pm End of an excellent day of good sailing in bright sunshine and warmth. Still making around 6kt now and seas, although quite big at 3.5-4m, not causing a problem. Bright moon shining from slightly hazy but clear sky - Southern Cross high up and Sirius nearly overhead

Had a rum punch to celebrate earlier, having a nice meal tonight and will have a 'Dark and Stormy' later in further celebration.

Magnetic variation has increased to 30 degrees W. When I try to estimate the true wind direction using the tiny wind ripples on the sea surface, using the ship's compass which shows it as, maybe, SW, it's actually nearer to SSW - subtraction is the order of the day... 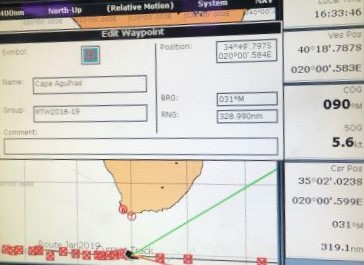 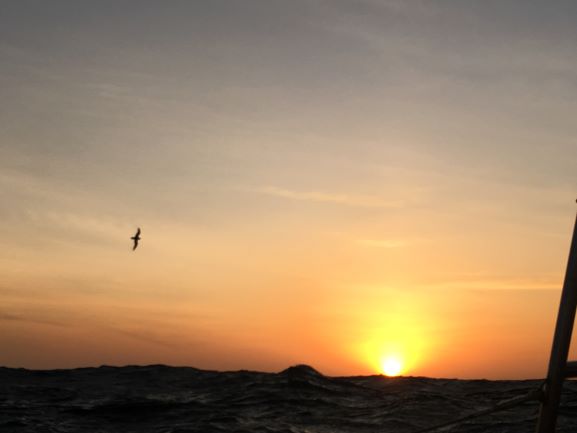 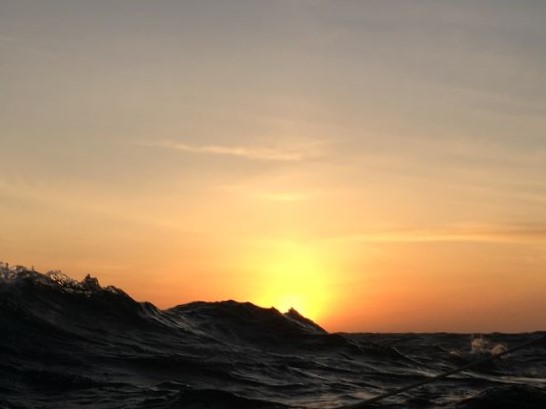 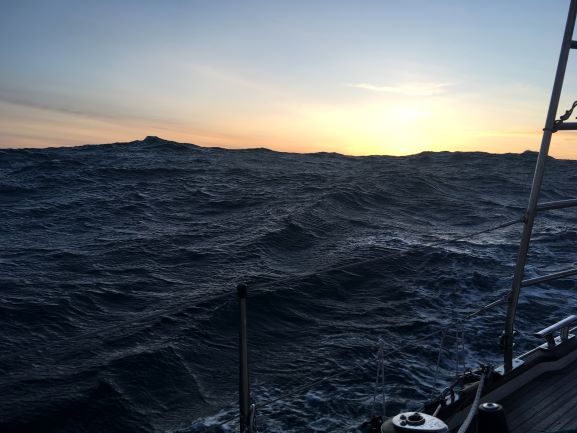