Tuesday midday What a change from yesterday afternoon's lovely sunshine and clear sky! It's grey, chilly and raining quite hard at times. I saw 5kt for a short time, as the present rain came in, but we're down to 3.4kt now. Think it's going to be difficult today with wind backing from WNW to S, maybe SSE, at some point this evening, probably quite suddenly. From then, there's expected to be mainly 10kt E (head)winds of another High for the next two days... before the next big Southern Ocean Low starts getting close to give N-NW winds and rough conditions - but maybe some decent speed.

2pm Speed has dropped to below 5kt - about to gybe onto starboard to head S - don't want to end up too far N with S winds forecast later..

4pm As I went to gybe, the wind dropped and kept on dropping. We're now making about 1kt, often dropping below, and, although trying to head SSE, we're being taken a lot more E - which I'm quite happy to see! - so we're ending up with a COG of 100T. We're certainly not making much progress S, as was intended.
Still grey and chilly. The rain has reduced to almost nothing but I'm expecting more on its way. Also expecting the front to pass over and the wind to back quickly to the south.

The wind generator serves a very useful purpose as a wind direction indicator, visible from the main cabin - but with this little wind, it's showing the apparent wind to be ahead from the SW, rather than the true wind still coming, I believe, from WNW-W.

7pm Daylight has faded fast from a leaden sky - no hint of a sunset today. And no hint of anything but a zephyr of a breeze. Genoa has been furled in and we're drifting roughly E - 0.0-0.2kt SOG! Rolling about a lot in the swell - 3m/10ft still. Waiting for wind to fill in, as it must. We're in a small Low between two Highs - and the wind will probably fill in from the S-SE - lovely! Just what we (don't) want! Nothing to be done about it - so just have to go with the flow... When it comes, during the night sometime, we'll have to head NE, rather than SW - forecast is showing two days of SE-E wind....
A small group of petrels sits together astern of us - expectantly... hoping for something? Clearly not worried about being so close - they know the boat well now!
(With them coming so close, so often, managed some good photos of them.)
Having a mug of hot soup and will get to my bunk early - maybe tomorrow the rain will clear away to give some drying conditions for the sail, so I can get back to sewing if the wind is not too strong.
Feels like a 'non-event' type of day...

9.20pm Moon is high up, shining hazily through thin cloud layer... wind generator blades are still but it's pointing to S .... rocking in swell... eerily silent.
We've begun to drift N now, instead of ENE, so maybe the wind has backed into the S? We're drifting NE at 0.4kt.

Midnight Thin cloud cover with full moon lighting up the sky, out of sight behind clouds.
SSE wind has come up - but not by much - wind generator is turning but putting in very little power and we're making just 2.3kt ENE under close-hauled full genoa. We got under way, as distinct from just drifting, a short while ago. 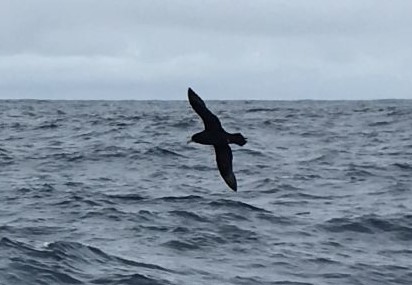 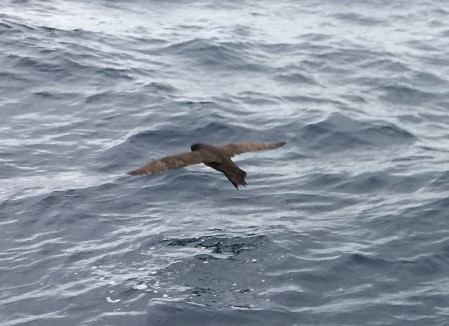 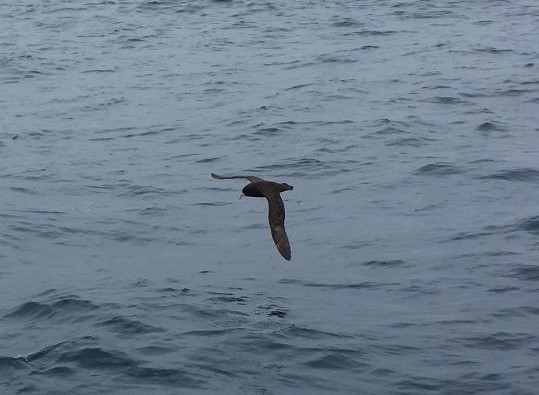