Friday 11am Had radio chat earlier on usual 7160 sched at 2300Z, discussing how things had gone with autopilot problem and trouble-shooting. Getting a lot of support over ham radio - very much appreciated and it feels as though there are a lot of friendly people out there, happy to give me what help they can.

Back down below now after removing link from Depth and Wind instruments to Seatalk bus. (That step had been agreed with Robert in S.Africa earlier in night by telephone, after telling him that error messages were still appearing after disconnecting the plotter in the cockpit from the Seatalk bus.) Not normally difficult once the instrument panel had been removed but big seas still running at 7-8m and causing boat to lurch and heel each way suddenly and often were definitely not helpful.

I thought wind was easing but, as I removed Wind display, it showed wind had gusted up to 34kt. No more wind info from now on unless I find it can go back into the system without causing any error messages.

11:50am Just removed Multi-display from Seatalk - got three error messages a few minutes apart beforehand so, clearly, removing just the Depth and Wind didn't make a difference - waiting now for any further error messages to appear on the Chart Plotter...
Time for breakfast... Have had nothing so far this morning.

12:25pm Maybe no breakfast just yet - soon after I wrote that, the system beeped again - another error message "Heading Not Available" - the usual one.. And again now, as I write this... Will remove the Speed display Seatalk link now.

While I waited to see if any error messages would turn up, treated myself to some pancakes with maple syrup - definitely morale-boosting!

Also, went up on deck to get some fresh air and enjoy the scene nearing sunset. A big swell running still, so big waves still approaching Nereida's stern. A few birds have been around, over the last day or so. Saw an albatross at one point - yellow-nosed or other? Wasn't able to ID it, also other birds, ...smaller - prions possibly.

8pm Went to look at the Wind display which was, not unusually, misbehaving. Tried to move the tiny spade terminals up and down in an effort to get a better connection and stop the erratic display - but only managed to lose the data completely...! Have some replacement terminals of the same type so need to cut the cable and replace /crimp them on tomorrow - maybe that will resolve the problem of the erratic wind information that's been seen for quite some time? Certainly worth trying.

5am Sat (1900GMT Friday) Still no error massages seen so, hopefully, the AP problem has been dealt with. Very tempted to bring in drogue now, although still dark - need to get underway (and test the AP) before we lose the wind completely - pressure shot up during the evening. It's now 1024hPa meaning High pressure is over the region - and meaning lighter winds soon, although not too bad now - 15kt or so. 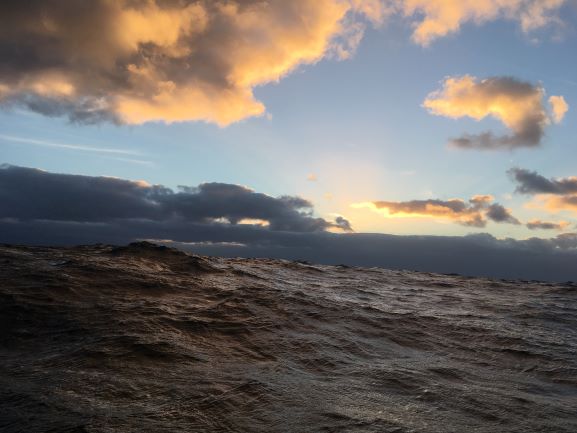 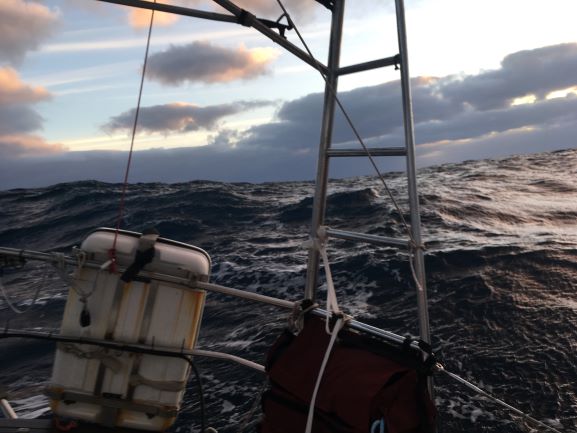