Looked as though both wind and seas would be a lot less by Sunday afternoon, so the plan was to bring in the JSD by sunset and get underway by nightfall...

The hope is, wind permitting, to round the 4th Great Cape - SE Cape of Tasmania - by next weekend, leaving the 5th Great Cape - NZ's SW Cape, near Stewart Island - to be rounded the following weekend or soon after - as said before: a plan made "at low water in wet sand"... We'll see how it pans out.

5am Sunday LT (1900GMT Sat) Conditions are slowly moderating. Getting back for more sleep after posting reports - no rush to get up early!

11:30am Just went up on deck, all ready to try to get the JSD in early, while winds seemed to be somewhere between 15-18kt. Got organised and then realised a rain cloud had spread over bringing not only a shower but also stronger wind - well over 20kt... So came back down to wait for raincloud to disappear and, hopefully, lighter wind to prevail.

Midday Back up to try again after rain stopped and wind less - but still too much wind at around 18kt.
Went to look at wind-steering rudder, having noticed tiller arm was still and no longer madly swinging about. To my delight, found the rudder had fallen off! My work releasing the pin and knocking it through as far as I could must have been of use and its motion in swinging about violently and sometimes knocking into the stern of the boat must have caused the pin to work free so the rudder could drop down - great! No further effort needed on my part... Good news! One job crossed off my list.

2pm Break - shower has come in with wind over 20kt - not getting anywhere, so time for a quick break while it passes over - probably 10-15 minutes.

Now bringing in second half of the line. The good news is that it gets easier, the more is brought in. The bad news is, as kept happening at the start, that when the knotted end of a splice gets trapped under the wrap below it, it just will not come free. Had to use a rolling hitch on the line leading to the winch to get one free - just couldn't get enough slack on the line below, around the winch, to free it - they're very bulky knots for obvious reasons. Seems not to be happening now, with the braided nylon line of the second half, and often getting enough slack to pull in more than one cone at a time, in less wind.

2:45pm DONE!!! All in - now to get underway...!
Line had seemed to go on forever as I was pulling it in around the winch... but eventually I decided that maybe I could get the remaining portion of line in from the stern, pulling it in by hand - that worked fine and was a lot quicker than using the winch. Lovely to hear, and then see, the chain weight finally coming up...

Cockpit is now full of line and cones - need to re-pack it but will have to wait for daylight tomorrow - no strong wind or weather expected so OK to leave it there overnight but must deal with it urgently in the morning.

7pm Dark. While it was still daylight, cooked a big meal in pressure cooker - handy for volume. Ham, potatoes, large onion, dried peas, tomato paste, green beans - enough for three days at least and can always add to it if I fancy. Nice to have something ready, just to heat up. Might add some tomatoes and chick peas.

Will catch up on some sleep now before the usual radio sched on 7163 in 2 hours' time. Didn't get enough last night and feel quite tired after an early start on the JSD retrieval and a lot of sustained effort needed to bring it all in. Needed to keep a constant tension on the line since the self-tailer on the winch can't be used. Always holding on like mad with both hands to stop line from slipping back as tension came on with the motion of the boat. We were rolling around a lot all the time in the prevailing 4-5m seas...

10:30pm Had a good sleep before and then a long session on radio with plenty of contacts - both US and Australia. Wind has really died now - we're struggling to make 2kt, often below, and AP is struggling to keep our course.

Just spoke to Robert to let him know that AP is behaving fine - but wind instrument has gone down again - showing 0.0kt for wind speed although apparent direction is fine. Need to get out the multimeter and do some measuring of voltages tomorrow in daylight - there seems to be a bad connection somewhere - problem is to find it!

5am Monday LT (1900GMT Sun) Dark night. Still struggling to make way on course in light wind from WNW.
Just got an email from Robert Galley - following my suggestion- they were having a celebratory, sunset 'AP braai' with boerewors, in Glencairn, not far from Simon's Town, a glass of wine in hand. Thanks a lot for your help and support, Robert! Sounds great - I'm missing the boerewors! 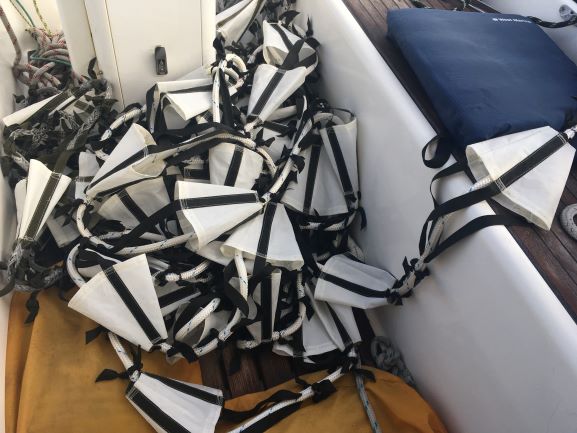