7am Dawn almost breaking. Dark grey mass of cloud ahead with deep orange line of light below. Bright silver crescent moon high up above. Seas well down.

Just gybed the genoa in the twilight of first light - onto port tack now. Still very slow progress - struggling to make way downwind in very light wind. Wind should pick up over the day - but very slowly and not by much, so it will be another slow day. Must pack JSD away soon but getting back to my bunk now for some more sleep in present calm conditions.

10:30am Having breakfast after a long radio sched - lovely to chat to so many contacts in different parts of Australia - from Perth and Albany in West Australia to Flinders Island in the Bass Strait and up to near Brisbane. We're close enough to mainland Australia for part of the coast to show up on my AIS screen 120ml away now - Cape Banks in S.Australia, close to the border with Victoria. First land I've seen show up on the screen there since the Falklands, soon after Cape Horn!

Sun is trying to get through broken cloud cover - it could turn into a pleasant, sunny day. Wind is still light, so making just 3.5-4kt. Wind instrument has just gone down - yet again, it's showing 0.0kt wind speed. As soon as I've packed away the series drogue (JSD), I must get out the multimeter and do some measuring of voltages - there must a bad connection somewhere on a thin yellow data wire, so I must try to find it. There aren't too many possible places to check, fortunately.

1:45pm Just finished stowing JSD - had to make sure it will run freely when deployed and, having lost second bag to Neptune on deploying last time, having to use a sail bag - so needed to make sure it was well lashed down on the aft deck beside first bag. Good to have a clear cockpit again.

Very cloudy sky - looking like rain clouds but, so far, no rain, but chilly. Wind still light - only making 4kt. Seas not bad - about 3m or so. Pressure has slowly been dropping - now 1017hPa.

Will get out multimeter to look at wind display problem after having some food - hot soup and then some pancakes - need hot food to warm up.

Later: Not sure where the time went (probably in dealing with emails, quite a long time spent looking at weather and route coming up and a long radio session on 7163/66) but will have to look at wind instrument problem tomorrow - display still often giving a reading OK but then goes down again - most likely place for a connection problem is at mast base inside main cabin.

Suddenly got a lot more rough as wind increased a bit over the afternoon, giving better speed for a time, but wind has been less overnight than expected - DMG was disappointing when I went to record it just now and SOG of 3.8kt was far less than the 5kt in stronger overnight wind that I was hoping for.

The pancakes were excellent though!

Weather looking not quite as good ahead as hoped for - several light wind patches are likely. One as we make our way S off the W coast of Tasmania, another as we round the SE Cape (possibly with a light headwind) and a ridge of High pressure dropping down over us, moving E, as we begin to cross the S end of the Tasman Sea towards Stewart Island, New Zealand. Hopefully, things will change for the better... All we can do is to keep on going - but further off the Tasmania coast than I had routed us initially. There are some high mountains there and wind is likely to be better further off, rather than closer to the coast. 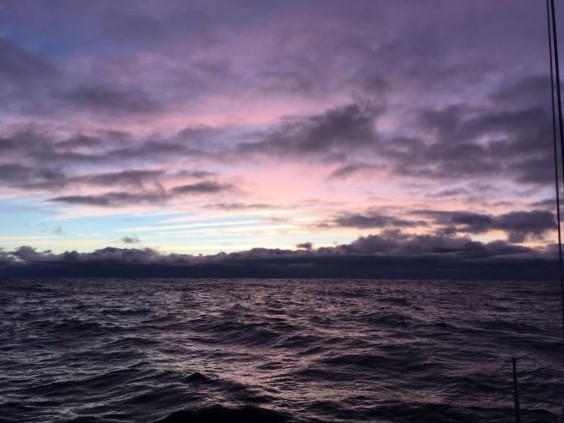 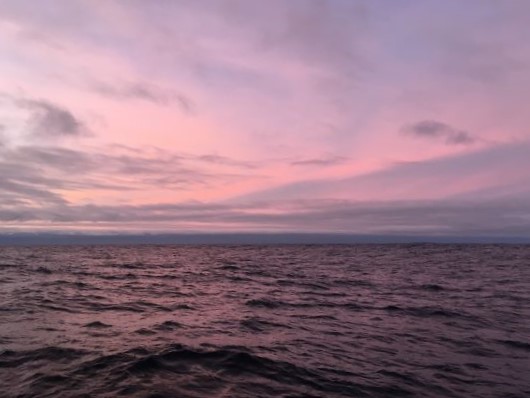