Happy Mayday! Will you be dancing around the maypole today?

Just finished a long radio session - lovely to make so many contacts from so many different places in the Australian mainland, many of them familiar voices now, and head SE towards Tasmania's southern capes.

1pm Had a great two-hour sleep after the usual 9am (2300Z) radio session had finished. That lasted quite a time and I was feeling quite tired beforehand so I got straight back to my bunk to catch up on the sleep my body felt was missing - probably still making up for the sustained effort needed when bringing the JSD back in on Sunday. So I'm now having a very late breakfast!

We're going very well now, heading ESE towards the NW tip of Tasmania in a good N wind - making around 5.8kt - far better speed, for a change - would be good to make a fair distance while we can.
Sun isn't quite getting through the thin overcast but it's quite a bright day.

4pm Been busy with more radio scheds, chatting to quite a few people - usual sociable evening!
Seas are up with the stronger wind and they're on the beam, so we're moving around a lot. Pressure has dropped to 1003hPa as the Low to the W moves closer, on its way SSE.

Sunset - sat in the cockpit for quite a time, just enjoying and absorbing the scene - the sun going down beneath the clouds, shining brightly for a time, a couple of rather small, dark birds flying nearby - not sure what kind so I need to look at them carefully in better light tomorrow.
Saw an albatross earlier today - a different one from those seen before (but definitely not a Wandering or Royal), so another challenge to identify it when seen next time. We're close to several islands and rocky outcrops where the birds breed and there are some birds that are special to this area - so not too surprising that those I'm seeing seem different from those seen previously. A pair of storm petrels circled around for a time also.

Getting to sleep early tonight, hoping not to feel I've had too little by dawn. 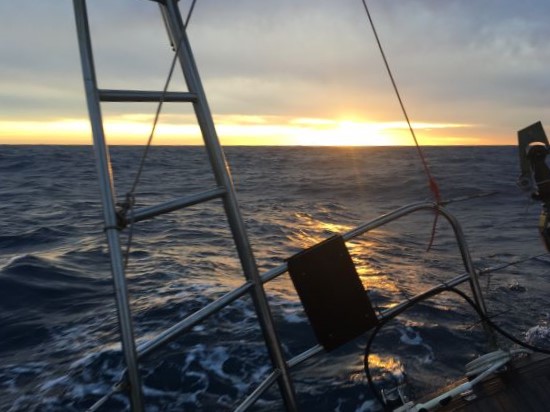 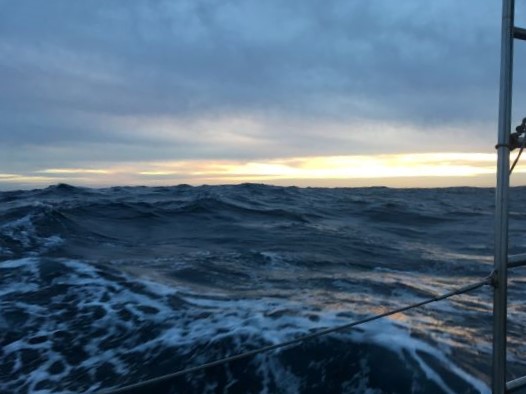