Monday 8:20am Just gone dawn - but a grey sky. Feeling damp and cold, with air temperature just about reaching 16C/61F. Making around 3-3.5kt, often a lot less, hard on a SW wind which has dropped to 15kt, trying to make sure we clear Cape Providence, 107ml to the SSE. This will be a slow day, with light winds.
About to call Taupo Maritime Radio for my twice-daily sched - to confirm "All is well on board" and give position, COG & SOG.
Will get back to my bunk for some more sleep soon.

1:30pm I was clearly very tired - after not too bad a night's sleep last night, I lay down for a nap around 10am - and woke up just before 1pm! The sun was shining brightly from a blue patch of sky - one of two or three quite big ones among the otherwise grey clouds. We're still rolling around quite often but seas are definitely lying down
We're only making around 2-2.5kt, sometimes getting up to 3kt or just over, in wind that has veered a touch more towards WSW. Slow, as expected today, until the wind veers and increases further. But pressure has risen to 1020hPa, so we're being affected by the High to our N.

6pm Went up on deck to do some tidying up while the seas are not too bad - removed ends of lines where JSD bags had been torn away from the stern arch supports, untied retrieval line for JSD from stern cleat - hoping to untangle it from remains of bridle so JSD useable again. Replaced trysail in its bag where it had come partly out. Generally checked around.

Looking at what had happened, it occurred to me that it was a good thing there is a hard top over the companionway now. It seems to me that a cloth awning held in place with the usual tubular supports would have been badly damaged by the water impact that had clearly occurred. In a previous knockdown, 100ml W of Cape Horn on 5 January 2011, the awning had been totally lost - supports and cloth - everything was taken away by the impact, leaving no protection whatsoever over the companionway.

7:30pm Making better speed from time to time - under clouds? Occasionally making 3.5-4kt, instead of the usual 2kt - nice to see some better speed - possibly also helped by the wind having veered more to WSW meaning we're less hard on the wind - always makes for better speed and less heeling.
Spoke to Colin about my Aurora system - working so much better now. Tracker info is being put out frequently and in full and email uploads and downloads are unbelievably speedy.

9:30pm Contacted MRCC NZ for a quick status check - they're watching me via my AIS signal which, with us being so close to the coast, is updated every few minutes.

11pm Back to making just 2kt in wind of 10kt or less from just N of W - but at least our course is good - at due S or a little W of S - want to keep well off the rugged NZ coast hereabouts.
Had an enjoyable session on the satphone linking to the ham radio with Jim, WB2REM, orchestrating. Was nice to make contact with some familiar people as well as several new ones - from Chesapeake to Texas to Tasmania to Canberra - all sending good wishes - thanks to all of you!

5:30am Dark still - just before dawn. Wind has been slowly dying - mainly now only 8kt, but has just gusted to 18kt for a short timewhich makes it easier to maintain our S course - difficult when wind too light.
Coast is just over 50 ml away - Cape Providence (just N of Puysegur Pt - marked on photo of chart).

Tomorrow, I'll be chatting live on BBC Radio Solent with Julian Clegg on his Breakfast Show - that will be live at 7.25am Tuesday BST (11:25pm Monday PDT). Hopefully the satellite link won't make our voices too 'warbly'!
Before that, I'll be chatting to CBC Victoria during the afternooon (Monday), time tba. 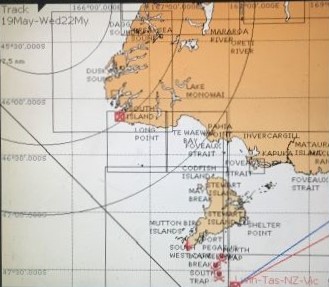 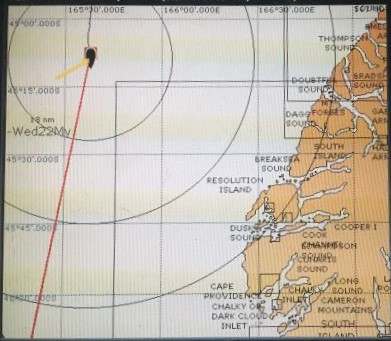