Tuesday 8:10am NZT (Mon 2010GMT) Sun trying to get out between a few breaks in cloudy sky - some small blue patches. Rolling around downwind in 3m seas and wind from WSW-SW of ~15kt. About to go on deck to gybe onto our preferred course of 075T and shake out more sail to speed us up - very slow just now and genoa not being very effective - keeps collapsing. Likely to need to pole it out but will wait until we've gybed and are on course to decide on that.

10am Grey skies and no hint of sun...
A big problem with the topping lift gone - had to shake out 2nd reef before the boom was high enough, with wind in enough sail, to pass over the bimmini framework - no way could I lift it up to get it over with the 2nd reef still tied in. I've now left it on the framework, supported partly by it, while I think through the situation - not ideal since we're running downwind and the boom should be sheeted out as far as possible to maximise speed. We can only make due E with difficulty, as things are.
Wondering about using the spinnaker halyard brought aft around the mast - but chafe will be a problem if I do that. Only other available choice is the 2nd genoa halyard.... but I'd prefer to keep that in reserve for the genoa, in case of a problem of failure with the present genoa halyard. Also, the spinnaker halyard is slightly thicker, so should be stronger. Took away the old topping lift from the boom end.
Having some breakfast while I ponder my options, in case I've overlooked something.

11:30am Some good news - the Low that was threatening is definitely no longer a threat - and maybe does or will not even exist - in any weather model! Means that we can head directly to a WP at 155W, or even 150W, and head N up the Pacific, roughly toward Hawaii via Tahiti, from there - in SE Trade winds initially.

Decision - go with spinnaker halyard - and keep fingers crossed it lasts and doesn't chafe through until after my return...

2:20pm Unbelievable how long some things take! The nice thing was working with so many birds around - albatrosses and petrels. Took a time freeing the spinnaker halyard so it would lead well around the mast top, then taking it back, keeping tension on so it didn't get tangled anywhere, attaching to aft end of boom and then coming back to mast, keeping tension on the spare line for as long as possible and finally winching in and closing the mast jammer... Job completed, with the boom held just nicely above the bimini framework and its weight taken by the spinnaker halyard - now under the title of 'topping lift'.
So then the mainsail could be sheeted out to where it needed to be for running downwind and a preventer firmly attached to the boom end to keep it in place before making a course adjustment.
Next job was to raise the pole to starboard, ready to take the genoa and go 'goose-winged' (or 'wing-on-wing') - another long job, especially rolling around in present 3m/10ft seas. Finally done and waiting to be used. The beauty of the system using three lines (up, fore, aft) is that the pole is independent of the sail and can be left in place if the sail is wanted on the other side for a time.
With the genoa upwind ('to weather'), held firmly on the pole, and the mainsail sheeted out downwind ('to leeward') we can sail on a much broader reach (more downwind) than otherwise - the genoa works well, held on the pole, and is not blanketed by the mainsail. Time to furl it in a little and take it over before adjusting our course some more. Then some lunch... I've worked hard for it!

3:30pm Still a fair number of birds around. Wind from WSW at 12-15kt. Another excellent job done - climbed up and removed a bit of string caught around the Superwind hub - wasn't too difficult, despite swell, and the windgen's blades are now spinning merrily again. Good to have its help charging the batteries.

4pm Suddenly today, have been getting 'Heading Not Available' messages on plotter.... On and off, beeping continually... Damn!!!

11pm Wind has died right down overnight - we're creeping along at 2-3kt - probably all night long.
Will turn off plotter so I can sleep - sometimes silent for a long time, other times it sounds every few seconds... Often it stops by itself. I'm suspecting one of the two AP control heads must be causing the problem now but not sure which one can be safely disconnected without causing an AP control problem.

Tuesday 2:15am NZT (Mon 1415GMT) Wind died, so very little boat speed and difficult to maintain our course.
Having to sleep in snatches at chart table in between dealing with frequent "Heading Not Available" messages that come up on plotter - often self-correcting but not always... Turning off the plotter didn't work - then got NO PILOT messages on AP control head!
We're drifting due N at just over 1kt, with bow pointing 057T. Wind has backed to S, it seems, judging from our drift. Time to take genoa off the pole and to port, if so.

3am Very wet on deck - it clearly rained a short while ago. A lovely starry sky, moon high and just out from behind clearing clouds to NE.
Took the genoa off the pole and over to port and took up on the mainsheet to bring the mainsail more aft - we're nearly on a beam reach now. Speed is better - 3.5-4kt instead of 1-2kt - and so is our course - no problem making our preferred course of 062T now. Wind is about 12-15kt from S-SSE.

5am Still trying to get somewhere with plotter error message problem. Trying to make contact with my reliable Raymarine person in SA but no joy so far. Now seems clear to me that one of the two AP control heads (one of which, in cockpit, is not very easy to access behind) must be causing the problem - but so far I'm not clear which one to disconnect - so very little sleep overnight... I'm tired!!!

6am Daybreak a short while ago. Wind had died back down again and we were making only 2-2.5 kt and struggling to keep on course. Went on deck to find that wind has backed more - to SE - so we're on a close reach now. Sheeted in mainsail and our speed increased immediately - making around 3.5-4kt now, in wind of just over 10kt.
Lots of grey clouds around - some showers not far away. 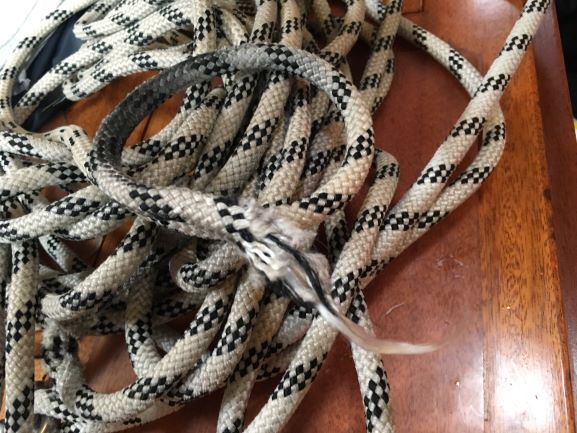