Thursday 10:30am LT/Tahiti time (Thurs 2030 GMT) Wind 6kt from NE again - just like this time yesterday but plenty of cloud around today - rain seen falling to starboard and a hint of it on the air here. Rocking gently in very little swell. After a short time drifting due N, we're now drifting NW.
Radio propagation not so good today and we're getting further away - was fine to Polynesia but not good enough to make contact both ways with Fiji - although I could hear them well enough, they could not make out what I was saying.

Another day effectively becalmed - will work on mainsail again - particularly on a repair made at Timaru, just in from the original leech repair - it needs strengthening with more stitching.

Midday Coffee!! Not had any for a long time and decided to use the French press insert in an insulated mug. Worked fairly well and was a good substitute for the out-of-action Bialetti/Italian coffee-maker that succumbed to corrosion a while back. (The steel version was lost a few years ago, unfortunately.) Aluminium and sea air do not mix well - guaranteed corrosion will occur sooner or later. Impossible to unscrew it despite Kroil and major efforts used.
Will be looking forward to fresh milk for my tea and coffee on landfall - this particular brand of dried milk (maybe all 100% dried milk?) is definitely not recommended - despite vacuum-packing! Should have checked it out before stocking up with it and should have bought a good 'creamer' made for coffee, instead. Just does not dissolve well and sometimes makes a paste at bottom of mug - yuck! UHT/long-life milk would have worked fine but I brought a lot less with me this time.

Swell is making boat roll around quite often - tie myself to the boom using my harness and that allows me to get on quite well with the sewing needed, despite being perched quite high up on coach-roof. Patched this particular area back together with sticky sail repair tape yesterday and now I'm sewing the edges at intervals, hoping to keep the patches from coming undone, as was happening to the original ones.
Finishing a (very!) late breakfast (brunch?) before going back on deck - very overcast now - won't need to cover up quite so much. Still a light NE wind - no use for heading N-NNE, as I'd like to. ...And we're not in the Doldrums yet!!

Back on deck - repair work won't get finished if I don't keep at it. Keeping legs/arms/feet covered to be safe from burning...

2:40pm Heard Superwind starting up, turning suddenly - N wind of 7kt, gusting to 10kt, we're drifting WSW . We're right in between two dark grey rainclouds - a little rain but not much, so far. Re-installed storm screen half, just in case... Waiting to continue work on mainsail, clearing up some more, down below...

3pm Completely calm now - rainclouds seem to have dissipated, although remnants are still close by and sun trying to get out.

11pm Managed to get quite a bit done on mainsail today in between showers, although very slow progress with stitching, especially when the fair-sized swell made us really roll around at times.... Was good to strap myself into the boom for some of the work - helped a lot.
Heavy rain just now but no sails up to take advantage of the wind it brought - thinking of unfurling the genoa to try to do just that, although wind usually dies once the rain stops.

Need to get away from this calm patch - if we can't, we could be trapped here for several more days..

Midnight Rain stopped a short while ago but wind still around 10kt from NNE-NE - so full genoa was unfurled and we're now underway - sailing...! Not very fast and main yet to be hoisted (wasn't expecting to hoist it since still being repaired). Headed NW at around 4kt, trying to escape this calm patch, if at all possible. We'll see how well that plan works out...
To sleep now - might have a disturbed night...

4:30am So very difficult to sail close to the wind, especially at night, without a display showing wind direction. The genoa luffed up and then we went around in light wind. I thought maybe we were now in wind from SSW, as in a forecast for our position that I'd seen earlier, instead of NE, so tried gybing around onto port tack... All to no avail... After some time, we're back pretty well on same course, on starboard tack, as before - but slightly more to W - off the wind more, possibly... Now making 295T, instead of the hoped-for 335T which is clearly too close to the present wind which must be roughly NNE, or maybe it has backed slightly, and gone more to N.
Back to my bunk for more sleep... Another couple of hours to sunrise.... Lots of bright stars and a little cloud around, but no moon.

7:20am Bright sunlight now. Wind has now shifted to SW but query, very light - blades of Superwind (wind generator) are not turning at all. Gybed the sail and we're trying to make NNW but difficult holding course in such a light wind.

8am Wind has dropped to 4-5kt - seems we're back to drifting in little wind again. AP cannot hold a course when our speed is under 1kt so we're drifting around in light SW wind. Genoa was not filling, so furled it in and must see to mainsail repair... Need still to stitch in a few places at edges of sail repair tape that was stuck in place yesterday, so it can be hoisted later to help our speed next time we get underway.

Clear line of cloud ahead from NW horizon to SE - convergence zone where opposing light winds meet and air rises to form cloud - see photo. It's supposed to be drifting SE and, at some point in time over next two days (I hope!), we'll end up on its other side and get SE wind finally - to make our getaway N. On reflection, maybe we just crossed over...? 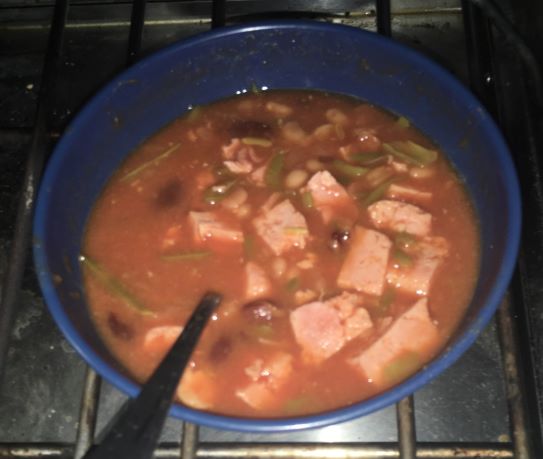 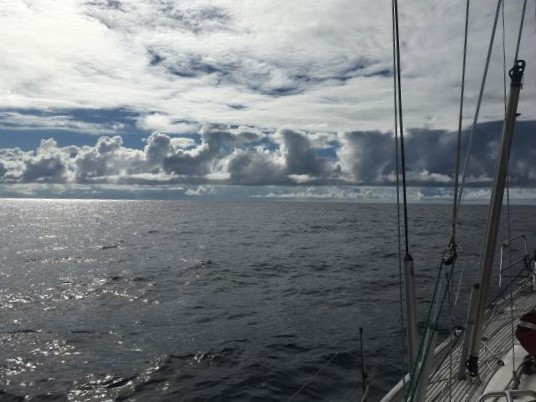 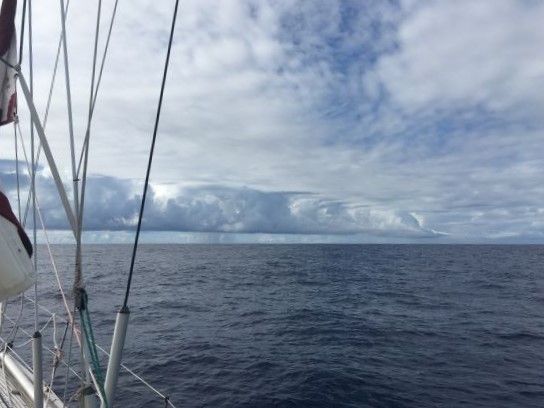