Tuesday 1:30pm Tahiti/Hawaii time (Tues 2330 GMT) Had a great two-hour siesta - needed it badly. Now having my breakfast cereal with dried fruit and nuts while the generator is running, computer is charging and water is on to boil for tea. I'll fill a lot of water bottles in a moment - keep the small ones beside the chart table to drink from whenever I feel thirsty and a big one stays in the galley.
Sun is shining nicely, although temperatures are down - cabin is now at 25C, not near 30C any more. I'm about to go and wrestle with the second reef line and 'frozen' sheave. In this fairly light wind, I left the reef half out to give more speed, rather than take it in before my sleep.
Even the line has been difficult to persuade to slide over the stuck sheave - just now, it won't move. I'm hoping to 'work' it if I can, by lowering the mainsail to release the tension in order to do that. Have squirted a load of Kroil around the sheave to try to persuade it to move. Don't want to put too much tension on the leech of the sail by raising the main without the reef line releasing - it needs to come loose.

2pm Will need to lower the sail and try to winch in the reef line after trying to work it by hand at the boom end before the line is tensioned again... Occurred to me that the problem might be inside the boom...I hope not!

2:35pm Problem solved... :-) I'm relaxing over my mug of tea! I was puzzled why there was so much tension at the boom end and none leading back to the cockpit clutch - I'd mistakenly closed the wrong clutch at the for'd end of the boom when I went to tension the outhaul on the mainsail foot the other day.... So having lowered the sail enough to realise my mistake near the gooseneck (boom-to-mast connection), the sail is now raised again, with the reef line having passed around the (still-frozen) sheave without too much difficulty.
Now to raise the sail fully by letting out the first reef - wind is dying, as expected, so our speed didn't stay up for long. Finishing my tea first and then, after raising full mainsail, I'll look at the starboard genoa car - hoping to get that repaired and back in place on its track soon.

Later: Spent some time on the genoa car. Stainless steel screws into aluminium were always going to pose a corrosion problem - but turned out to be not too bad - one screw proved difficult but came free with oil and firm but gentle persuasion... New replacements for the missing end pieces holding in place the long white plastic strips, acting as 'runners' on the track, were screwed into position. Tomorrow, the car needs to be fixed in place as a stop at the aft end of the genoa car track - either with a sturdy machine screw or being held by strong cord. (Useful to have an electric cordless drill on board!) The original machine screw sheared off so that will be left alone since it cannot easily be dealt with but fortunately it does not prevent the car from being slid into place over the track.

Very much enjoyed my evening meal of (wild) salmon and sweetcorn with mayonnaise - simple and appropriate. I'd decided it was not cold enough for a hot main meal, having started to prepare it in the warmth of the sunny afternoon...

9pm Finished most of evening radio sessions - having to change band for contact with several places (California/Oregon/B.C.) since they're now in 'skip' zone for 20m, but 40m is working fine. 20m is still working well for Australia.
Boat speed is now well down - around 2.5kt in dying wind... Just about keeping on course, which has been adjusted to 072T at present, but that will almost certainly change overnight if wind veers more and dies away, as expected. Pressure is now up to 1017hPa - has risen 2hPa/3hrs over the last 9hrs and is expected to increase as we get close to centre of High pressure cell quite soon.

My plan for tomorrow depends very much on being in calm conditions if genoa is to be removed from its foil and replaced by a second (small) staysail, to add in to available sail area.

Wednesday 1:45am Tahiti/Hawaii time (Wed 1145 GMT) I've been very surprised by our speed this evening, often seeing around 5kt, even 6kt at times... Must be cloudy and we're getting frequent increased wind under clouds. The wind has been slowly veering, so I've had to adjust our heading slowly - now due E although our COG has been mostly rather N of E (current?) and only now are we actually making a COG of almost due E. I'll be interested to see how the unexpected increased speed affects our DMG by morning. Expecting light headwinds over the coming daytime.

7am Bright day with 90% broken light cloud layer. Gybed around in veered wind - now coming from NE. We're making around 4kt on a COG of 007T, close-hauled with (small) staysail and full mainsail. Wind stronger than was indicated by forecasts - expected it to be a lot lighter by now. Pressure has risen 2hPa in last three hours - to 1021hPa.

8am Amazingly, wind seems to have dropped a lot since gybing around - just when I was hoping we'd make some good northing. Now only making about 2kt on 008T in wind of maybe 8kt - wind generator blades just about turning, despite heading upwind... Pressure now 1022hPa.
Spoke to 'Zoomac' on PolyMagNet - great still to be talking daily to boats in Polynesia and Fiji! (Had useful advice from Andrew on 'Eye Candy' last night.)
Clouds have virtually cleared away - blue sky overhead and thin wispy cloud layer on horizon all around. Seems we're in the light winds of the High pressure cell - expected to last for about a day, so little progress will be made over that time but, hopefully, we can keep heading N-NE while doing some boat jobs.
Hearing gurgling of water against the hull as we sail on slowly ... Time for breakfast while preparing 9am/1900GMT reports for posting. 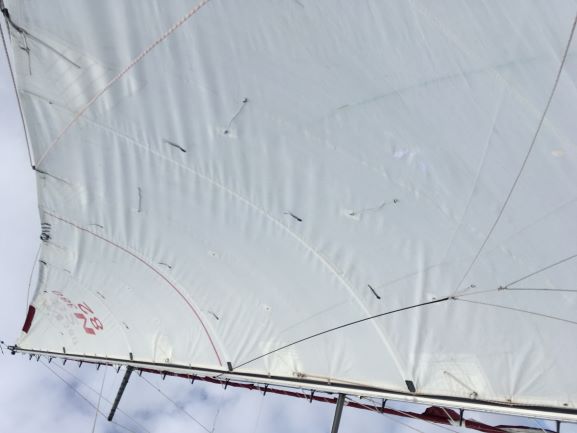 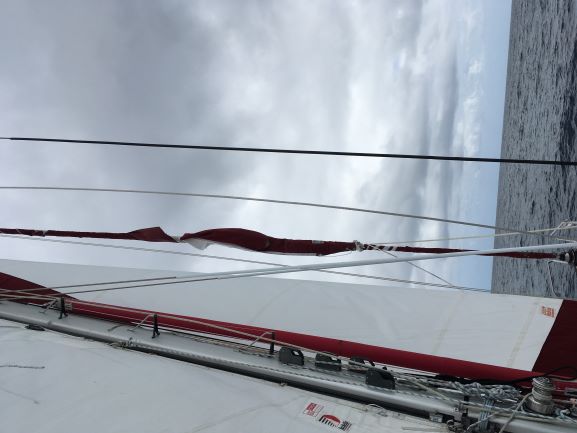