Wednesday 10am Tahiti/Hawaii time (Wed 2000 GMT) Grey cloudy sky - just circled around to get back on course after wind dropped more and backed sails in swell... Making NW at 1.5kt or less - difficult to hold a course...

10:30am ....In fact, impossible! We're drifting SW at under 1kt, despite a boat heading of 350T. Best to ignore trying to maintain a course and get on with jobs while wind is down. Wind generator blades are still, showing wind is anything from zero to 5-6kt - so nothing to sail by.

Was delighted to see a Black-footed albatross fly by early this morning - nearly all-dark - hope to see again - they're not uncommon all over the N.Pacific, right up to the W. coast of N.America. I've twice seen one, on different trips, just outside the Strait of Juan de Fuca in October.

Midday Had a very nice mug of fresh coffee - followed advice to make sure it was made using non-salty water - made a vast improvement!
We're drifting SW in light NE wind of 7-8 knots, judging from the wind generator which is only just about spinning. Since we need to head NE and that's clearly impossible, I've furled in the staysail and lowered the mmainsail (actually to third reef). I was hoping doing that would slow down our SW drift but it seems not to have made much difference. Clearly it helps stop wear on the sails, which is good. Part of the reason for keeping the sail hoisted with the third reef tied in is to get at the mainsail tear on the leech there - it needs some more attention, once I've finished with the other jobs.
Another item needing attention is the starboard sheet winch - it's started squeaking so clearly needs cleaning and greasing. Not a big job and I'll get to it after lowering the genoa - that's the job of the moment, now wind has died down so much. Pressure is 1023.7hPa - same as the 1024hPa given for the High's centre in the forecasts.

2:30pm Plan A just went down the drain .... impossible to unfurl the tattered genoa from the forestay... It's too tangled in place around the foil for the material that was torn away from the edges (leech and foot) to come undone. So the forestay and furling gear can't be used now for another sail, as I'd hoped..
Spent a time tidying up the lines around the mast and securing the genoa, its furling line and sheets (control lines).
Bright, sunny, peaceful, relaxing day. Smooth sea but with 2m swell rocking the boat from side to side. Pressure is 1023.5 - so fairly constant - and we're drifting NW.
About to try to mend the lowest tear in mainsail again, while I've access from cockpit with that part of mainsail being close to the boom. Sticky tape initially, running out of Gorilla tape but will use up what I've got left since it seems to be holding fairly well if I use a long enough piece each time. Having lunch 'on the run' - shrimps with sweetcorn and mayonnaise - tasty and it's still warm enough for cold food. Tonight I"ll finish it and follow with some blue cheese on crackers - had been saving it for my celebrations...!

9pm Increased swell from NE rolling us about a lot.
Spent useful time this afternon attaching the removable inner forestay to a dedicated point on deck below the genoa furler drum and then hoisting the storm jib on it, using the 2nd genoa halyard. Added a long strop below the tack of the jib so it ended up raised very high - hopefully, getting more wind - it's not at all big...
Used one long line to make its pair of sheets (control lines), using a cow hitch at the clew. Used the electric drill to add a machine screw onto the track to act as a stop behind the newly-repaired genoa car - now in use to take a sheet from the storm jib. All finished in the last of the daylight this evening.

It's possible that the present very light winds will continue for a short time tomorrow morning - in which case I'll try to add some tabling to the mainsail leech repair I worked on earlier today. Have some material left still but need some time to stitch it in place to strengthen the torn leech.

I also need to grease the starboard sheet winch before we get underway again - might be possible tomorrow morning if I finish the sewing soon enough, although shouldn't take long and is quite urgent so might do it first.

Thursday 2:30am Tahiti/Hawaii time (Thurs 1230 GMT) Suddenly heard sound of wind - from S-SW at 10-12kt - rushed up on deck to get moving - was difficult with wind not so strong and needing to head downwind but eventually we were making NNE - perfect! Never mind if we're very slow still - NNE is far better than SE - where we were heading before!!

Will get some sleep - but fully expect it to be disturbed by wind dying possibly. Need to raise more mainsail but will wait for daylight to do that - safer if able to see what's happening.

8am Lovely sunny day with very little cloud - woke earlier to find us heading due N at over 3kt - great! Adjusted course to head a little more E but was nice to find us heading on a good course at a fair speed, instead of being becalmed still, as was expected as of yesterday ... Need to let out some reefs to speed up more but want to check weather ahead so will do that first to make sure our heading is OK. Downloading weather info now. Greasing winch will have to wait for when not in use.

9am Glad I checked weather ahead - best to stay on port tack for a time. Also, if we head directly for the 'barn door', seems we'd end up becalmed again in the next High coming along in a few days' time - better to keep heading more N to keep away from its centre and in better wind. Will make as much easting as possible, but will try to avoid those light winds. Trying to 'goose-wing' the staysail - seems to be working to give better speed just now - giving wind to jib as well, hopefully. 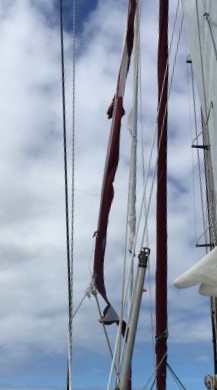 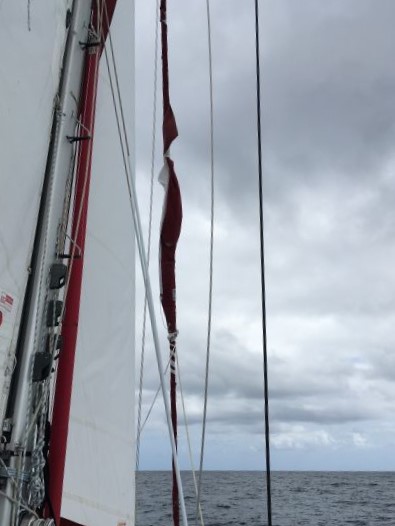 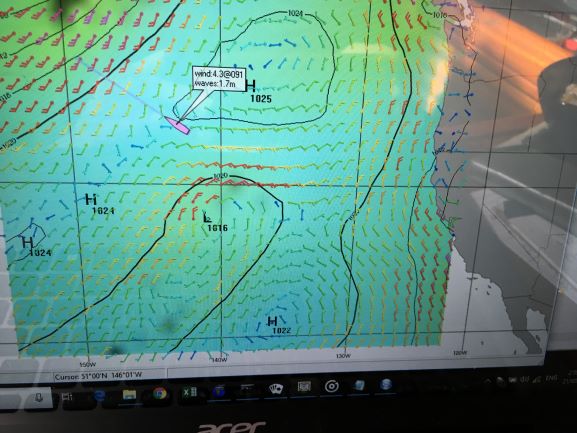 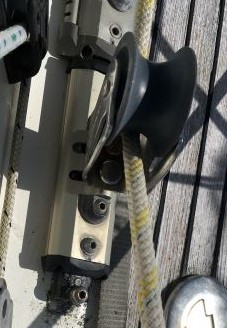