Saturday 10am Tahiti/Hawaii time (Sat 2000 GMT) Grey overcast sky. Staysail goose-winged for time being to give better speed in very light SSW wind on almost dead downwind course - wind generator not turning, so wind under 6-7kt.
According to weather info just downloaded wind will stay very light all day, probably backing to S and then SSE at some point very soon...
I'm constantly checking fresh weather files as they come available to see if I can change our course for the better but there's a 'wind hole' in the N. Pacific for the next several days and all we can do is to try to get around it as best we can. It will mean several days of little distance gained, if any, towards Victoria.

Possibility that we might need to change course to NE to get further E if we possibly can. There could well be a Low coming in after the High moves N, giving headwinds towards Cape Flattery - talk about 'threading the needle'! Weather forecasts are constantly changing - will check latest now.

10:10am Looks as though we need to gybe onto starboard tack to try to get further E, if possible... lots of 'threading the needle' will be needed in light winds today... By this time tomorrow, we might have light S wind, becoming stronger SW wind, allowing us to head NE...

10:40am On starboard tack now - making 4.7kt, heading 064T. Wind expected to back so will need to change course as and when necessary. Checking weather forecast to see if course OK.

11:15am Heading 084T - will be forced more N soon enough, so making Easting while it's possible. Good speed - over 5kt - but wind getting lighter.
Need to make enough speed over next few days to reach Strait of Juan de Fuca as soon as possible, trying to beat a Low forecast to develop just off the Strait... Difficult but we'll give it a shot...
Here's the forecast:
29th August - 1st September - the High will have moved N and a Low is expected offshore, giving S-SW wind close to Strait of Juan de Fuca entrance - so a headwind likely when close to and within the Strait (making it very difficult to finish then). After that, winds might be light for another day, until wind from NW fills in to allow a finish towards Victoria.
We'll need either to be finished by 29th August (unlikely) or in a good position just off the Strait entrance (clear of the shipping lanes) during that weekend, so we can heave to and wait for the Low to pass by, after which we can continue in to a finish in fair winds. (I'm hoping that Low disappears from the forecasts soon, so we get in sooner...!)

Midday Light rain, grey sky. Time for lunch - chicken soup and blue cheese on crackers..
Spending a lot of my time on weather thoughts and trying to make best course and speed as wind changes, trimming sails ... so not getting to those email replies.

1pm Just saw a whale! Heard a blow and it surfaced quite close by, to port - very dark grey/black and smooth, no barnacles seen, a very recurved, good-sized, dorsal fin - either a grey or humpback - can never remember which usually has lots of barnacles - the humpback?? Means it was probably a grey. It seemed a bit smaller than I recollect the humpbacks being. Waited for a time, hoping it would come up again - but not seen again.
I was up on deck checking on wind direction and sail trim - we're close on the wind, which must be from SE and has increased with the present light rain, so we're making about 5.7kt. There's a slow, well-rounded 3m swell from W. Hint of fog - visibility definitely restricted.

3pm Dull and wet - light seems to be fading already... We're still making ENE close-hauled - going well although wind a bit less so speed now down around 5kt rather than 5.7kt. Have been filling water-bottles with drinking water while running the water-maker and also cleaning around the galley - always an ongoing job.

5pm Foggy afternoon - everything is wet and dripping, with big drops hanging off all metalwork and dripping off the mainsail and boom, into the cockpit ... & onto me if I don't keep out of the way. Need my foulies now. Visibility is down to 2-3 boat lengths.
Having a mug of tea with a rare Tim-Tam (only 4 more left) - always welcome! Rationing my 'goodies' to make sure I don't run out too soon - if having a biscuit, I'd normally have two with my tea - but not just now.
Still managing ENE course but speed has dropped further ... to ~3.2kt in 8kt wind from SE.

6:20pm Just finished chatting to boats in Polynesia - once back in port, I'll miss the boats there and in Fiji that I've been chatting to for several weeks now!

10:30pm Had to finish radio session on 7160 in a hurry - bilge float alarm was going off (needed to pump the bilge!) and we'd gone hove-to - the wind had shifted and backed the sails so I had to gybe us around and then get us back onto a more northerly course in the wind now backed to the E. We're now heading NNE and should be fine on that heading for a time. Will get to a disturbed sleep with alarm set for a few hours' time to check on course and speed - wind likely to back further so will need to make ongoing adjustments to course and sails overnight - hopefully, nothing major before daylight.

Sunday 6:30am Tahiti/Hawaii time (Sat 1630 GMT) Just had to gybe around again and then set a course of NNW in wind that has now backed to NE. Pressure is right up at 1024hPa - we're in a high pressure ridge so winds will be very light for a time.
I was up early with dawn daylight - seems I should be changing my clock time one hour forward to be in sync with where we are now.... but I quite like being still in my present clock time - especially when in fog, as we have been for a time. The fog has lifted, in fact, but it's still lurking. Hawaii and Tahiti sound very pleasant when the sun is hidden in foggy, damp conditions!

8am Wind has died right down and we're not even creeping along - making under 1kt drifting - unable to maintain a course - sails aren't filling and boom only kept in place from swinging around in the swell by use of an inboard preventer. Still a long W swell.
Will grease the starboard sheet winch soon, while it's not in use and I've daylight to see by.
Just found a small sheave lying over the port deck drain near to the cockpit - must look around and try to find out where it has come from... not a good thing to find lying around on deck...
Finished chatting a short while ago on a few morning ham radio Nets, while having coffee and breakfast - 7155, 7146.5, 7192 (Chubasco), 7233.5 (Baja). Hadn't made much contact with them up to now because their usual time was too early for me when I was further W. Good to renew contact with several radio friends that I've known for quite a few years.

8:30am Can't see where that loose sheave has come from - looked everywhere, including within boom gooseneck - one possibly missing there but not in a position where it would be doing anything useful and possibly never there in the first place. Puzzling. Not a big one so can't have been taking a very big load.
Checked weather.... Looks as though we're too far SE to get the nice SW winds that were forecast for this position yesterday and that were supposed to allow us to head further NE...... They're being shown to our NW and we're in a 'hole' going nowhere with slight possibility of light winds later today to help us get further N.... Grrr!

Just furled in staysail, released running backstay and lashed the wheel, waiting until wind strengthens and comes from a more favourable direction - from a S quadrant, rather than from a N quadrant... We're drifting SW at just under 1kt now.

Should get my outstanding emails dealt with today - after winch servicing.

Think I'll make a thick hearty soup - like my Southern Ocean ones - excellent and cheering in colder weather. Putting some beans in to soak ready... Finishing my breakfast - glad I've still some cereal bars to supplement my cereal later next week...

DTF: ....who knows? I certainly don't... Theoretically, just 660n.ml. which would normally equate to 5-6 days - but that's likely to be irrelevant in view of weather forecast over coming week. 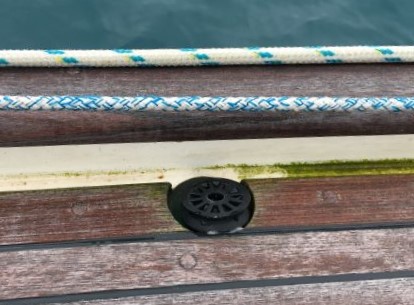