Sunday 10:30am Tahiti/Hawaii time (Sun 2030 GMT) Drifting SW in almost no wind. Very peaceful, with just a gentle rocking in the rounded 2m swell from W.

11:15am Mostly overcast sky with a touch of wind from NNE so trying now to head NW and managing WNW - so long as it's north-ish, that's OK! A lot better than drifting SW. As wind changes, we'll have to change with it. Pressure even higher now - 1026.5hPa - has been rising steadily for last 9 hrs from the steady 1020hPa of yesterday.

1pm Sky has brightened and I've had to take my warm top layer off - just too warm!
Just managed to keep going - difficult on a close reach in such a light wind and with swell rolling the boat around. But as I wrote that... the wind died away and we couldn't keep going any longer.
Been busy making 'hearty' meal - beans, barley, ham, tomatoes - works well, especially the next day after cooking - thickens up nicely.

1:30pm Went to have a look at the preventer end on the boom - and, to my absolute horror, discovered that the boom end had come away. It had been pulled up and out by the topping lift (previously the spinnaker halyard) and was now lying on top of the boom with two reef lines against the sharp edge of the boom end metal (maybe that sheave had come from inside - from the now-unused, first reef car, perhaps?).
The boom end part wouldn't budge until after I'd lowered the sail to stop it moving around, having released all connected reef lines, the outhaul and preventer and, finally, released the topping lift to let the boom come to rest on top of the bimini framework which acted nicely as a gallows for it.
Ironically, the very light conditions that led to the problem were now a blessing since the sea was a glassy flat calm with just minimal swell so I was able to work on the boom as though at the dock.
Banging at it with a rubber mallet, as I'd tried to do initially, wasn't needed to help move the end part into position once everything was loosened. I was able to pull the end part back to the boom edge and then over and down into the boom with a bit of pulling and wriggling - not too difficult.
Fortunately, I still had one of the two screws needed to fix it in place from previously, so was luckily able to match it up with another of the exact same thread from my spares.
2:15pm Boom end part back in place with Loctite on the screw threads and outhaul re-tensioned.... Now waiting for some wind to hoist the sail... it's totally silent just now - absolutely no wind at all to move the sails. Pressure is 1026.8hPa - high!

The cause of the problem - only one screw had been holding it in place for quite a time. The other had come away a while ago and I couldn't get it back in place again at the time because the boom end part had moved slightly. It didn't matter then because the outhaul was normally tight and, together with the topping lift, and reef lines when in use, it was actually holding the end part in place. But, in these light conditions, to get more sail shape, I'd very recently released the outhaul quite a lot and the topping lift was loose because the full mainsail holds up the boom instead, so the snatching movement of the topping lift on the boom with the motion of the full sail in the swell allowed the end eventually to come away (held onto the top of the boom by the various lines)

Time to relax over a very late lunch. I was hoping to service the starboard sheet winch but that will have to wait. Similarly, catching up on emails - the boom end took over... Looking forward to a siesta - have been up since very early this morning and feeling pretty tired.

Think I'll celebrate another challenge overcome with a good meal tonight...and now have food ready prepared for the next couple of days.

11pm Keeping my fingers crossed that the wind increases a bit more - we're now making over 3 kt but need a touch more speed to get N enough to find wind to head E before the High moves N and causes us untold complications in trying to head to the finish.

Monday 12:30am Tahiti/Hawaii time (Mon 1030 GMT) Changed course onto 035T after going goose-winged with staysail and sheeting out mainsail as much as possible. Wind SW 8-10kt and we're making ~4.6kt.

8am Checked over fresh weather info - seems that the only real option, now we're N of 48N, is to head almost due E now, at best possible speed - so will gybe around to change course onto starboard tack.

8:30am On new course, heading E, making excellent speed - seeing over 7kt, averaging about 6.7kt. Expect wind to lessen later, possibly, and our speed with it.
Time for breakfast...

ETA: ....who knows? Totally dependent on winds coming up... In perfect conditions, would be 5-6 days - but that is unlikely to happen, given present weather forecasts of the High in our way and then a Low developing near the coast.
Can't do more than my best efforts, to get in a.s.a.p. I really want to finish!! 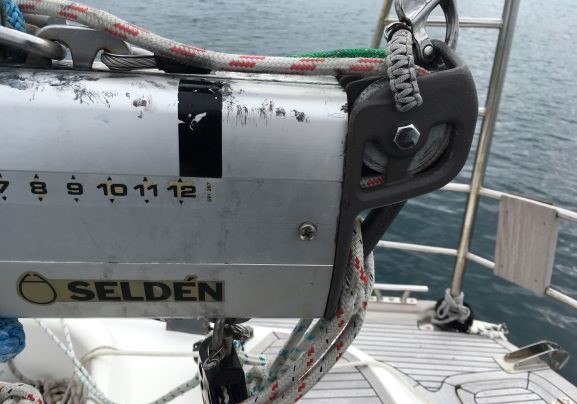 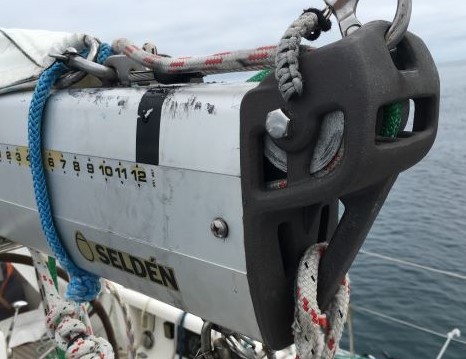