And greetings to the friends at RVYC (and elsewhere) who I hear had a small celebration of my Equator-crossing last night!

Sun 3pm I didn't do much after crossing the Equator at 12:12pm PST, other than sit out in the shade in the cockpit and enjoy my situation - how many other peple are so lucky as to be sailing across the Equator at good speed in good winds and in such settled, bright, sunny conditions? I managed a lot of singing and even some dancing to the music I played during my Equator-crossing party time - useful to have a sturdy pole to hang onto while moving to the music down below when the boat is well heeled and bouncing around in the swell!

Having had so many boat problems to deal with since leaving Victoria, I felt that a little down time and relaxation wouldn't go amiss. I'm still looking at blank Speed, Depth, Wind displays in the cockpit .... (pause while I sing to 'Tom Dooley" "Michael, Row the Boat Ashore" and "It Takes A Worried Man to Sing a Worried Song"!) ... and a blank chart plotter and Multi display down below. But, to be honest, so long as you know you're headed roughly S, weather is looking pretty settled and there's nothing in the way for a big distance, that's not a major problem! If I needed to, I could get out my sextant and play with that (latitude is really easy to find if the midday sun is out) but I actually have a GPS position from my AIS display and easily-accessible paper charts tucked away. It's good to have installed an independent GPS input to the AIS, separate from my other instruments (since they have now gone down!), and it's nice to know that the big ships (over 300 tons) can see our signal - not that I come across many ships, normally none, once we're this far S.

I also wanted to send a big "Thank you" to so many good friends who have given me their friendship and support over the last several years - again, I feel very lucky to have got to know so many lovely people. Makes a big contrast to hearing the daily news.... which I'm happy not to get while out here at sea!

My musical afternoon continues ... with classical guitar - lovely! Maybe later I'll look again at the instrmumentation problem - would be nice not to see all those blank screens but it's not so simple to resolve... I must dig out those paper charts for the Pacific... Tea-time...

6.15pm PST Sun is setting - we're still making good speed, over 6kt, under a partly (40%) cloudy sky - lots of slightly grey cumulus, lined up along the wind direction. Since we're heading S, on a close reach, i'm deducing that the wind direction is roughly ESE. Going up on deck, to get a more accurate direction while I can still see the tiny wind ripples on the sea surface, I just confirmed that - the wind is coming from exactly ESE, as is the swell.

I'm very happy with the state of the batteries - on one solar panel and the Superwind, it's actually over 13V! It's helped somewhat by the fact that so few instruments are in use and we're on wind-steering (Fred, the Hydrovane), of course...

Getting ready for my evening check in to Pacific Seafarers' Net - along with Mark on 'Maverick' and Uku on 'All in One', both in GGR. I'm first on the roll call and they're second and third respectively - a matter of who joined the roll call when...

Mon 3am Talking to Bob, N4PSK, on 7163kHz, about how to go about removal of plastic cover on spade terminal on the circuit breaker that keeps 'popping' - useful ... Will try later, in daylight - want to clean up the terminal as much as possible.
Checking out my (expired) Navionics charts on my iPad - have good coverage in a few places and can get GPS info into them from a bluetooth dongle, so hoping to manage displaying our track along with a decent COG readout - that would be useful to see since it's usually quite different from our boat heading. Otherwise, I'll be plotting positions onto a paper chart to deduce rough track and COG - always a back-up possibility.

Went on deck to adjust Fred - want to keep heading just E of S from here. Expect to pass not far from Pitcairn Island in just under two weeks' time.

9.50am PST Bright sunshine, a few small clouds. Just spent quite a time adjusting Fred, with the wind more in the East, and furling in a touch more genoa - we've been heeling quite a lot. We're making very good speed - around 7.5kt, often over 8kt. Wind must be well up - we're in the SE Trades!

Batteries are now up to 14V and solar panel regulator display light frequently 'blinks', showing it thinks the batteries are full - excellent!

Time for a late breakfast with fruit juice and then some coffee... Needing plenty of liquids. Then it's down to looking at the instrument problem... Photo shows the terminal giving a problem - but that might be one of many! 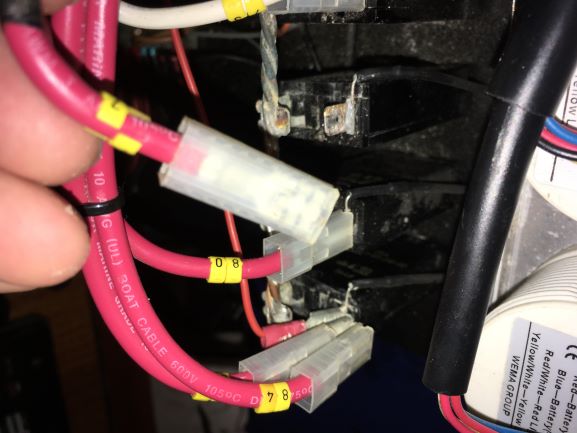