Mon 5th Nov - Guy Fawkes in UK - I've one small sparkler I seem to have acquired which I was going to light tonight - but I think I'll leave it to celebrate seeing in the New Year - by then, we should be well past Cape Horn so that would really be something to celebrate!

4pm YAY!!! I've got all the instruments back working again! Excellent! Something else to celebrate... Maybe something later with my meal... I could not find a way to remove the plastic cover on the corroded spade terminal on the circuit-breaker, no matter how I tackled it ... so, in the end, I cut it partly so it could be pulled off but replaced later. The terminal is now looking shiny bright and I've coated it with a protective water-proof layer - did the negative terminal as well, while I was at it. Fingers crossed, it will now continue to behave fine... The wind display is working with everything else. I'm feeling really happy just now - despite the grey cloud overhead!

We were ambling along in a dying wind, after having been gradually slowing down since morning, from the 7-8kt boat speed we had then to more like 6-7kt and then, a short while ago, around 5kt. But we've suddenly picked up speed again - instead of a few small clouds in the sky, there's a very big grey raincloud ahead - giving us wind... Seas were becoming less enough for me to consider going on deck to begin to look at the staysail - several things of concern there - but not now - it's become quite 'bouncy' again.

Instead, I've been busily putting the three missing 1900GMT waypoints into the newly-reborn plotter - no more calculations will be needed now for distance made good (DMG) over each 24hr period!

Later: Wind has eased from 18kt to 16kt - we're making around 6kt due S and it feels a lot gentler. Waiting to see whether to unfurl the genoa some more - "Have a cup of tea," as one sailing instructor would always say....

Tues 0300Z (=1900PST Mon) Pacific Seafarers' Net Control (W6WAR in the USA) had big problem copying boats on the roll-call. Propagation just not good enough - contact was just too light for reports to be heard clearly enough. I chatted to Cliff on 'Sedna', headed to Opua, N.Z. from Minerva Reef, and also to Mark on 'Maverick' headed East across S. Pacific - both OK, Mark with strong winds at 45S, as usual. Couldn't quite copy what communication problem he said he had but SSB/HF radio is clearly working fine.

Soon after, chatted to several radio contacts in USA on 40m with good propagation - far better than on 20m.

Heading slightly E of due S now - want to get E of Pitcairn and Henderson Islands which are almost due S at present. To NW of Pitcairn are the Tuamotus and Gambiers - an area of reefs and coral atolls - definitely best to give them a big clearance!

Overnight, it was a very bumpy, dark night - so much so that I went on deck just before dawn (see photo) to head us more off the wind. Instantly, it felt far more comfortable as well as our speed picking up nicely!

1100 PST (=1900GMT) - end of Day34. We made 139 n.ml.(DMG) over the 24 hr period since yesterday's 1100 PST position. I now see I mis-calculated the DMG for yesterday's report - it should have been 160 n.ml - a very good 24hr run over Day33! Wind has just gusted up - raincloud ahead... Was about to post this - but had to get on deck in a hurry to take in a second reef in 25kt wind...and rain. Just towelling down after getting rather wet... I'd been thinking it would be quite nice to take a deck shower soon - but not just now... Wind has eased now to 16kt - rainsquall didn't last long... Sky is brightening...
I'll post this, get a dry top and tidy up lines in cockpit...and maybe get some lunch. Will probably have to shake out that reef I just tied in... 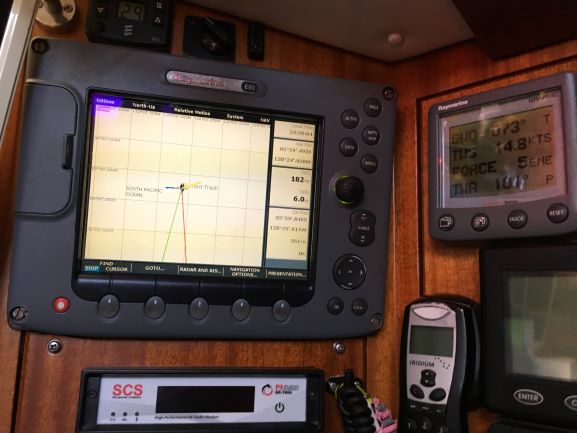 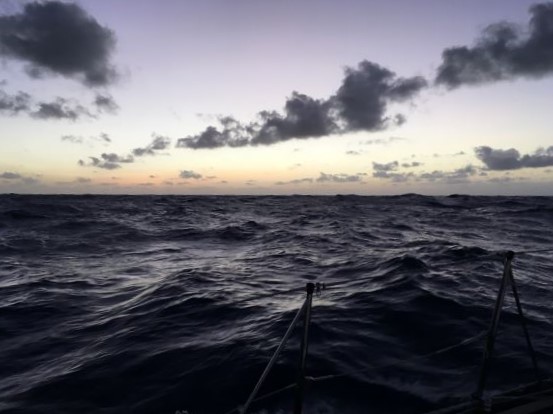