Thursday 2pm PDT (2100 GMT) A lovely bright, sunny day. Heading SE since tacking around just after sunrise (around 7am) in NE wind. Sky is covered in a lot of thin, wispy white cloud - sun shines through without any difficulty. Heeling a fair amount and pounding at times into the wind-chop that has built up on top of the 2 swell - it's always better to be sailing upwind than downwind.
Opened my last carton of fruit juice with breakfast - might just manage to eke it out until landfall sometime early next week, hopefully.

3:30pm Radio is giving a problem when trying to transmit - possibly a corroded connection near the tuner - need to get to it (not easy, especially in a swell) and clean up any corrosion found so the radio can be used again - in the meantime, will not use it on transmit (although can listen) to save it from possible damage.

Having a late lunch before getting to a short siesta - feeling tired after an early start to the day and several checks on shipping overnight.

4:45pm A lovely sunny afternoon. Been checking weather- we'll stay on this tack until winds back into E, forcing us to head more S. Getting to that siesta now..

6:40pm PDT 'Tsingtao Express', container ship headed to US, is due to overtake us at 15kt on our port side in 33 minutes - AIS alarm woke me up from siesta. Later: Was expected to pass about 1 ml off but I'm seeing that distance increasing as she alters course slightly to give more space between us - now over 2 ml. (Took a photo as she passed.
Called 'Ivy Alliance' headed for Singapore at 12.6kt (ETA 20Sept) and asked her (very pleasant-sounding) officer to give more clearance - she was due to pass within 1ml of us - now increased.

Sunset - very nice to see but wind had increased enough, and we were heeling that much more, that I decided to reef down - so tied in first reef as 'Ivy Alliance' was passing the other way. Heel was reduced and speed increased!

11:30pm Wind is veering and forcing a change of course gradually more to the S. Being dark now, having to listen out for the noise of the sails to tell me when to change course, as we are headed due to the wind shifting. We're making a good speed of around 5.5kt.
Time to get to my bunk - with one ear listening out... Likely to be very disturbed sleep with possible sudden wind shift from ENE to S, requiring speedy overnight action to tack around and head E, plus possible shipping coming close as well. We're clearly right in middle of busy shipping lanes between Asia and Vancouver and other points S.

3am Tacked around half an hour ago - we were heading SSE and wind was up. Of course, having done that, the wind now seems to have died down and we're not making the NE course I expected but just E of N - and at only 3kt or less. But the wind should eventually veer more so our course will improve - I just have to be patient and follow the wind around as it shifts over the next few hours.

4:20am Watching 'Great Wealth' approaching, en route to Vancouver. Had to call them on VHF radio to ask them to divert and pass astern of us - they wanted to pass my bow - a dangerous move! - they agreed to go astern, at my request, as a safer move... Distance of closest approach is now expected to be just over 1 mile off our stern. Once they're safely past, I can get back to my bunk.

4:45am 'Great Wealth' just passing astern - 1.22ml off. Immediately, they resumed their original course - 100M instead of the 135M they'd steered on to avoid us.

7am Murky daylight - total grey cloud cover as the light strengthens. Very light wind - Superwind blades spinning but not very fast. Up from my bunk to check on course and shipping but all OK except not making much speed and course is not good - NNE at best.

10am Grey day with sun trying to get through cloud layer. Wind very light still, so speed well down and only making NE course - but better than NNE!

Midday Wind veered a bit more, so better course - 060T... but oh-so-SLOW! Sun still trying to get out.

ETA: ...?? (Ask the weather gods that have sent these light headwinds to slow us down...)

It would be great if you would take a moment to click on the Lifeboats link here (https://www.justgiving.com/fundraising/Jeanne-Socrates2), if you'd like to show your support for my efforts at sailing solo, nonstop, unassisted around the globe, trying to set a World Record as the oldest person to do so9hr, by donating something towards the great work the RNLI do every day. If a lot of people put in even a small amount, it all adds up... Thanks a lot! If you can help, it will be very much appreciated. Let's see if we can reach my target!

1900GMT = midday PDT (Pacific Daylight Time) - end of Day 331. We made 60 n.ml. DMG, measured in a straight line between the two 1900GMT positions. Actually sailed over 91 n.ml. but tacking (zig-zagging!) against a headwind made for a lot less than that distance gained. 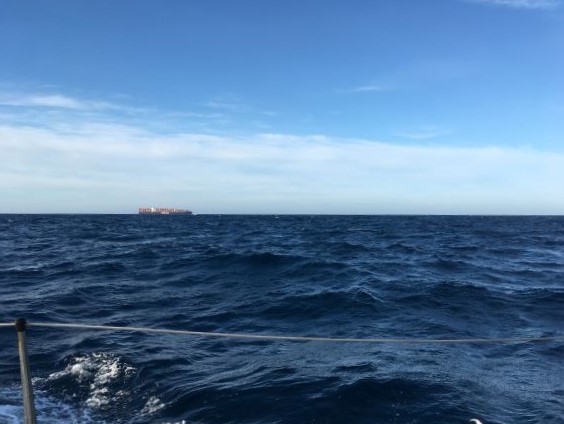 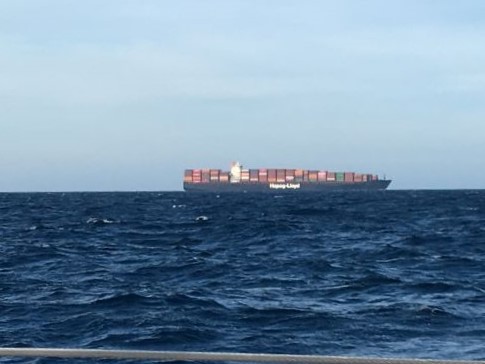