Friday 4pm PDT (2300GMT) Course has been steady 060T since early morning and sun was peeking through light broken overcast cloud - but now it's a lot greyer and we've had some rain - looks as though more is coming. Pressure has dropped steadily since last night and is now 1007hPa.
Weather forecast shows a band of heavy rain expected - especially over tomorrow (Saturday) - as the centre of a Low gets closer.

Thinking of reefing down a bit more and heaving to - with ESE wind we can only head NW and I really don't want to head N any further.

5:50pm Light rain and grey sky.. We're hove-to and drifting gently SW at about 1kt in ESE wind with boat's bow pointing S - making a slight 'slick' in the water as we slide sideways. Very quiet, calm and peaceful - a good way to reduce stress! I've been getting very wound up with trying to head E, fighting the unfavourable winds we've been getting.
My thinking is to wait for wind from a direction that allows us to head anywhere from E to SE, maybe even S for a short while, before getting underway again. In the meantime, I can look at the radio tuner connections, to try to find the corrosion that I think is causing the transmit/tuning problem I suddenly found we had yesterday.

7pm Light fading and rain getting heavier. Having a chocolate biscuit and brownie with a mug of tea - and relaxing. I've counted up (yet again!) how many biscuits are left - one shortbread and one chocolate biscuit (or brownie) a day at tea-time until landfall next week, I reckon! Luxury!
Not sure where time went, although did deal with some emails and checked weather ahead but I later noticed that our drift had totally changed to NW - wind had veered a lot and was now coming from S-SSE at around 11kt - time to get sailing again ...

Saturday 12:30am Now underway, making the most of S wind while it lasts - won't be long before it backs towards E again.
Good to be headed almost due E at a decent speed for a time! Let out 2nd reef and unfurled staysail - making 4kt, often more - wind strength highly variable.
Must get some sleep - feeling quite tired - have not got to my bunk so far tonight...

9am Had to come off the wind by changing the boat's heading more to ENE around 4am - wind had clearly backed more and sails were not happy.
Think I must have over-compensated in my sleepy state.... Pity, since we could have gone a bit further E without making as much Northing, but we're not doing too badly at the moment.

9:30am About to check weather - downloading fresh files and running generator while I get some breakfast - think I should shake out first reef to speed us up, now it's good daylight.
Wind likely to back further into E, meaning we'll need then to change onto port tack and possibly head SE-ish, although wind might have become very light by then....

10:45am First reef shaken out. Becoming a lovely sunny day with blue sky and thin, broken white clouds - would be very enjoyable if it weren't for the knowledge that we're effectively sailing into a 'wind-hole'... Our speed is slowly reducing, despite full sail.
I can't believe how difficult the wind gods are making my final run-in. Instead of the 'normal' pleasant downwind sail in W, and then NW, winds around the N.Pacific High to the entrance of the Strait of Juan de Fuca, I've had to fight almost every mile of the way - plus I lost the use of my now-shredded genoa in a gale and, for last two days, my radio - so none of the many sociable contacts I've looked forward to making every day.
Believe I'm setting another (very unwelcome!) World Record - for the longest nonstop sail once around the world!! Incredibly, it will have taken over 11 months by the time I finally make landfall in Victoria - Wednesday is looking highly unlikely, so maybe on Thursday...? All depends how close I can get to the Strait entrance (Cape Flattery) over the next few days of light winds, ready for some good wind off the coast there by Tuesday.
I'm keeping my fingers firmly crossed that I don't repeat last time's experience (in July 2013) when I was becalmed just off (in fog) and then within the Strait over 3 nights while trying to complete that final 60 miles.

Breakfast - think I'll make a nice fresh coffee and enjoy it on deck in the sunshine while I pretend I'm just out for a pleasant summertime daysail in good wind...
It's getting so calm as we slow down in the disappearing wind that maybe later I can get to the radio tuner and antenna connections hidden away behind the aft cabin woodwork.....

Midday Clouds have cleared away overhead - and I'm just making out the misty outline of the mountains below clouds over Vancouver Island ahead - exciting to see them - landfall will happen soon enough!!
Sun is sparkling on the choppy water surface as a noticeable 2m swell comes onto our starboard beam from SSE.
Need to relax and enjoy being out here - not many more days to go and I'll miss it all terribly... Put away the frustrations of the delayed arrival and just take in the seascape. The antenna problem can wait for a short while... My coffee tastes good.

ETA: Thursday...?? (Ask the weather gods that have sent these light winds to slow us down...)

1900GMT = midday PDT (Pacific Daylight Time) - end of Day 332. We made 45 n.ml. DMG, measured in a straight line between the two 1900GMT positions. Actually sailed over 63 n.ml. but tacking (zig-zagging!) against a (light) headwind made for a lot less than that distance gained. 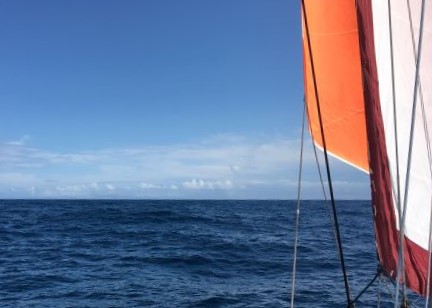 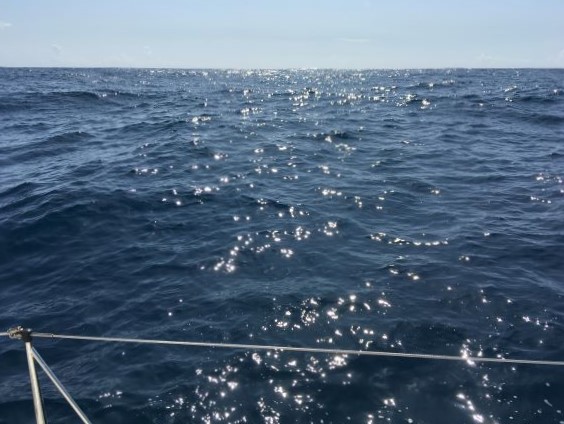