My website (www.svnereida.com) has several tracking/position options - go to the 'Travels' tab for links. Also, the www.QRZ.com page for my ham callsign VE0JS has a Google Earth map showing my track.
Once we're close to the coast, www.marinetraffic.com will show Nereida's position - very frequently updated - useful once in the Strait of Juan de Fuca and getting close to finishing.
***************************

Sunday 12:30pm Very shifty winds - up and down and varying in direction under grey clouds... Had to come off wind a touch to stop luffing up - wind must have veered a bit and we've been close-hauled on port tack for quite a time now. Speed got up to over 5kt but is now back down to 3.5kt... Full sail still - full main with staysail and small storm jib on removable headstay.
Just seen that the N end of Vancouver Island is beginning to show on my AIS screen - only 120 ml away.

3:20pm Not getting to radio tuner - too heeled over and bumpy in the good wind that's giving us 4-5kt SOG, although (speed) sometimes drops in lulls.
Actually having a good sail in pleasant conditions - often quite sunny, although plenty of cloud.

4pm Even better speed now - 5.5-6 kt, often in pleasant sunshine. Quite a bright sky, with occasional glimpses of the sun in the few blue patches between the clouds.
Weather forecast is for these conditions to persist - pity they didn't set in a bit sooner so my landfall could be a day earlier than planned at present.
If we could keep up a consistent speed of 5.5kt or more, we'd be in by tea-time on Tuesday! But that's just not likely to happen - the timing at the Strait entrance will tell all since, at that point, the likely weather ahead will be known meaning the likely time needed to get to my finish line can be estimated realistically.
Superwind is putting in 4A over the AP requirements - good to have the wind giving us battery power and keeping the voltage up!
Have some sweetcorn still in its can, left over from preparing yesterday's meal, so I'm adding it to a small tin of tuna - plus the usual big dollop of mayonnaise to help things along. No cooking required...

7pm Suddenly, the wind switched off - just died! Instead of 5.5kt, we're creeping along at 2.5kt... There seems to be quite an extensive area of rain off to starboard - the culprit?
Enjoying my last Broccoli & Cauliflower CuppaSoup - nice and warming... Only have chicken soup left now. Good to have alternative means of boiling water and heating food, now that propane tank to galley cooker is empty. Jetboil certainly does that - very fast and easy.

10:20pm Just spent a couple of hours trying to 'bandage' a fraying steering cable - it had come off the upper guide on the steering quadrant at its end and was rubbing under the quadrant... I've added cable ties in effort to hold it up and keep it from rubbing and fraying any further. A very temporary 'fix'!
Only noticed it because I was trying to get to the tuner to see about the problem with that. The two are close together at the stern and the steering quadrant was exposed on removing the bunk top over it to get to the woodwork in front of the tuner under the backstay.... Fingers firmly crossed my 'fix' will hold out until landfall... a bit of a worry, for sure. Have been busy thinking up a back-up plan should it give way (have cable and bulldog grips somewhere in my spares).
Wind is up and down - now we're making over 5kt, but earlier we were down to well under 4kt
Back to the tuner problem...

Monday 12:25am (Mon 0725 GMT) Finished looking at tuner. Took apart the connection I thought might be the problem, thoroughly sanded/cleaned the metal of the two ring connectors until bright and shiny and put them back together with a tiny machine screw and nut holding them tightly - still no transmission possible. Checked the control cable from radio to tuner - all looked fine. Had to remove a wooden panel for access - have left it open now.
Seems to me that the probable cause of the radio problem is the backstay connection above decks. I can't reach that at sea so it will, unfortunately , have to wait to be taken apart and renewed when I'm in harbour. I can listen without any problem - heard the cruisers on the SoPacNet in Fiji clearly tonight - but that means no more radio transmissions until the backstay/antenna connection to the tuner is dealt with - I'm sad not to be able to use it in the meantime to talk to radio friends as I come close to landfall. I've spoken to so many for so long now that it would be great to celebrate with them by voice!
Time I got to my bunk - need to get plenty of sleep - landfall will probably involve at least one night with little, if any, sleep.

7am Very grey, cloudy sky... and very disturbed sleep. 'Motor stall' error message, with beeping, kept appearing on autopilot (AP) control head display... Had to put AP into Standby and then back into Auto - until the next message came up - often just 5-10mins apart but sometimes a lot longer - all through the night... Tiring! Topped up hydraulic fluid at one point, in case that would help but didn't seem to make any difference. Have also been keeping the AP ram onto the steering quadrant greased regularly, in case that was a problem. We need to get in to give it all a rest - I can handsteer a bit but not all the time. Have been getting some sleep with the AP control in my hands (!), waiting for the next lot of beeping to wake me up...
We're making 4.5-5 kt and wind is up nicely now - as it has been quite often, although there have been prolonged periods when we've been very slow overnight.
Running the generator and charging the computer.
Seeing speed drop at times to around 3kt - keeps varying - due to cloudy conditions? Around 4kt now.

11:50am Feeling a bit better now, after catching up on some sleep. Having breakfast - still have some mango juice and there's a tiny amount of cereal left with plenty of nuts, seeds and dried fruit - more 'trail mix with cereal added' than the other way around!
Eased the sheets (sail control lines) for wind that's now giving more of a broad reach - always satisfying to see our speed increase on trimming the sails better, but only making around 3-4 kt, sometimes less.
Not had any AP 'Motor Stalled' messages recently - either my topping up of hydraulic fluid (or greasing of the ram) has helped ... or it's simply that we're in far calmer conditions, so it's working less hard.
Still have my fingers firmly crossed, hoping that the cable ties holding the frayed section of steering cable do their job holding it together until landfall.

ETA: WEDNESDAY is looking good, if wind keeps up ... (Ask the weather gods if they'll be sending more light winds into the Strait, or just outside, to slow us down further...)

Plan is to heave to once close to shipping lanes leading to the Strait, if we get there too early to continue on with the Flood tide at the entrance. If present light winds continue for much longer, heaving to won't be needed, but forecast is for wind to pick up later. Coming in overnight Tuesday into Wednesday should mean a daylight landfall in Victoria - 60 miles on, so normally about 12 hours away - but that requires decent wind - only those wind gods know what will happen on the day! We mere mortals can only hope.... 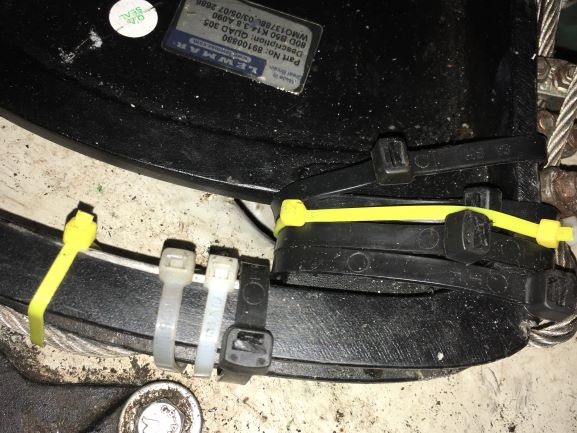