My website (www.svnereida.com) has several tracking/position options - go to the Home page or 'Travels' tab for links. Also, the www.QRZ.com page for my ham radio callsign VE0JS has a Google Earth map showing my track.
Now that we're close to the coast, www.marinetraffic.com will also be showing Nereida's position - very frequently updated - useful once in the Strait of Juan de Fuca and getting close to finishing.
***************************

Monday 3pm PDT (Mon 2200 GMT) Overcast sky and seas well down with wind very light still - only ~10kt or so, making for SOG (speed) of only 3-4kt - but that will be enough to make landfall in daylight Wednesday, so long as the wind keeps up.
Finishing my breakfast coffee after finally posting daily reports and checking weather and emails - posting photos with report always adds to time needed.
Looked around on deck earlier and saw the staysail furling line in a complete mess - clearly had not been tensioned enough when unfurled (have had the problem for a long time, due to a broken plastic part). Will furl it in and later unfurl it again, to deal with the line so it winds onto the drum correctly - otherwise, on making landfall, it will be difficult to stow the staysail easily. In present light winds, should be easy for me to deal with.

5pm Whale surfaced several times very close to us - quite a large one! Seemed to cruise along near our port side for a time and finally dropped back and stayed astern. Looked like the same type of whale as seen a week or so ago, all smooth, very dark grey/black, no barnacles seen, with a small recurved dorsal fin - either a Minke or a Fin whale?? About the size of Nereida. (Fin shape made Humpback seem unlikely.)

6pm Finished sorting out the mess in the staysail furling line. Now it can be furled in any time without a problem..
Feeling decidedly chilly now - still a grey, totally overcast sky - no hint of sunshine today.
Have been thinking about the backstay antenna feed-line, now that the radio is not transmitting, and discussed the problem with Jim, WB2REM. Either replace present wire completely with another wire or clean the present connection. If only I had a spare halyard, I could raise a ire as replacement, temporary antenna on that - but all halyards are in use, replacing other lines. That's my thinking. Problem is height - but with no solar panels in place on the stern steelwork, I reckon I might be able to access the backstay connection with a small amount of climbing and tying myself in... It's a tempting thought! Working on the possibilities - must stay safe.
Light beginning to go - time to get some food going - soup and a hot meal - too cold for a cold meal today. Cabin temp is 21.2C and sea temp is 20.9C - almost the same, so hopefully, there'll be no fog tonight.
Wind still light, maybe 12kt or so, and boat making 5kt now. Cape Flattery is 110 miles off. If we could keep going at present speed we'd make Victoria around midnight Tuesday, but I expect us to be rather slower making a Wed daytime arrival looking good just now.

Tuesday 4:30am PDT (Tues 1130 GMT) Wind has died overnight - had to gybe around and get back on course, after easing the mainsheet a lot more, taking up on the preventer and bringing the staysail over to port to go goose-winged. Making 3kt now in WNW wind of not very much. Dark night with very moist air.

Noticing a lot more shipping as we get closer to the Strait of Juan de Fuca - busy with big cargo vessels, mostly heading to or from Vancouver, with some to/from Seattle and Victoria.

Settled on course better now - pretty well dead downwind - not an easy point of sail, especially in light winds. Hope to get some more sleep before well into the busy traffic. Contacted Prince Rupert Radio on VHF 16/74 earlier, to make sure they were aware of us - single-handing and with no engine, only sail... Wind is expected to stay light - hope not too light and we maintain steerage.

6am Almost no wind - wind generator not moving... Still goose-winged, headed downwind, but only making 2.5kt, although roughly on course... Not getting very far just now!

9:30am Gybed the sails - light rain, grey, cloudy sky, wind has veered to SW... Not very much wind but enough for us to make 3.3kt in the right direction.
Had to warn two fishing boats overnight that we've no engine and were drifting under sail alone with very little wind - asked Prince Rupert CG Radio to help contact second boat, which was not responding to my VHF calls. They probably saw Nereida on their AIS so knew we were very close. Both vessels eventually replied to my calls, saying they'd stay well away. Good fishing here, clearly!
Back to my bunk to catch up on sleep.

11:30am Having a late breakfast - lots of dried fruit, nuts and seeds with a small portion of cereal.. and a lovely fresh coffee. Found some flaked almonds, dried blueberries and apple rings tucked away to add in, and still have a ittle mango juice.
Sky very grey and totally overcast. Wind very light and SOG only 2kt, often less but now from SSE so not too helpful a direction. Might increase a little and become more W later today but beginning to throw a question mark over Wednesday arrival...

(Interview with Chek TV just now - will be on News tonight.)

ETA: Very unclear again, now. Wednesday was looking good up to midnight last night, but wind might not be strong enough - looks to be too light just now to make Victoria Hbr during daylight tomorrow unless wind picks up quite a bit ...which it might do... Only need an average of 4kt to make harbour by mid-afternoon tomorrow - but presently only making 2kt. (The weather gods seem to have decided to send their usual light winds into, and just outside, the Strait to slow us down... Grrr!!!)

1900GMT = midday PDT (Pacific Daylight Time) - end of Day 335. We made 80 n.ml. DMG, measured in a straight line between the two 1900GMT positions. Very light wind overnight... Plenty of drifting and struggling to keep to our ESE course... 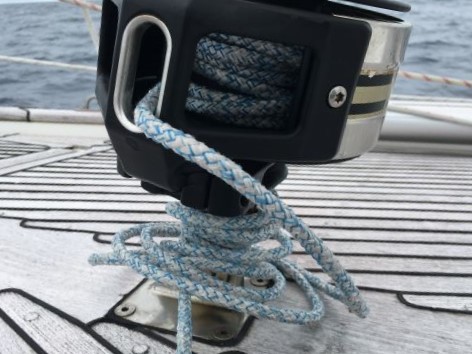