My website (www.svnereida.com) has several tracking/position options - go to the 'Travels' tab for links. Also, the www.QRZ.com page for my ham callsign VE0JS has a Google Earth map showing my track.
Now that we're close to the coast, www.marinetraffic.com will show Nereida's position - very frequently updated - useful once in the Strait of Juan de Fuca and getting close to finishing.

Wednesday 4:30pm A beautiful, sunny, peaceful, calm day, with both Vancouver Island's mountains and those of Washington state clearly visible: Canada to port and USA to starboard.
Wind well down- Superwind (wind generator) blades haven't turned for a long time, showing that the wind is less than 6-7kt - and it's coming from astern, so we're running downwind which makes the apparent wind even less, so our speed is that much less also.
The flood tide is just about to start in the Strait entrance which is still 8 miles away. That should help our speed for about four hours - until after 8pm tonight, when the tide will have changed to against us (ebb tide) and will be slowing us down.
Having one of my few remaining cereal bars with a coffee. Breakfast cereal this morning was late and there's not much of it left! One tiny portion has been kept for tomorrow mlrning - but I could still be trying to get in on Friday morning if the wind dies down again tonight...
Still 70 miles to go and unless we can keep up an average of 3kt, we shan't get to Victoria before 4pm tomorrow - Thursday ... Very much touch and go...

We had some noisy visitors earlier - a large group of sea-lions were nearby, playing around Nereida for quite a time - one boarded us at least twice! As I went to see what was happening, he looked up at me dolefully before slipping back into the water... I was relieved he didn't try to get up on board any further - he was clearly enjoying his rest on our bottom step.

A lot of big ships to keep clear of, especially in the early morning, but Prince Rupert Traffic kept telling them of our slow-going presence while we crossed the shipping lanes before entering the Strait.

The pole is hoisted for the staysail, to try to help our speed a little - goose-winged for dead downwind.

6:30pm It's beautifully peaceful and calm still, as we sail along gently under a blue sky. The sun is getting fairly low but is still bright and there are far fewer ships around just now to worry about.
Having a mug of tea with the last but one brownie and two of my few remaining shortbread biscuits, as I relax in the cockpit and enjoy the scene. A group of black seaducks, each with a distinctive white patch, rest on the water close by.
We're going a bit too slowly, unfortunately - seeing only 2.5-2.9kt instead of the 3kt or more that would make a Thursday daytime landfall more likely.

8:45pm Called by Pr. Rupert Traffic - S.S.Legacy approaching, also keeping S of traffic lanes, as we are. We arranged to pass port-to-port and changed course accordingly. S.S. Legacy offered to change course slightly to give more room between us - very pleasant and helpful!! SOG just over 3kt now but expect we'll slow down as ebb increases.

9:20pm Dark... Bright crescent moon over Cape Flattery - its light reflecting in the water, passing high mass of the Cape on our starboard beam, the string of lights of Neah Bay off to starboard ahead... Peaceful, quiet, gliding smoothly through the water... Occasional sound of a sea-lion exhaling - sleeping on the surface? SOG down to just over 1kt.... Seawater temperature has dropped a lot - now only 14.8C/59F.
Moved into Seattle Traffic's area of responsibility in the Strait - monitoring VHF Ch.05 now, instead of Prince Rupert Traffic's Ch 74.

10:30pm SOG down to around 0.5kt - we're making way through water fairly well but ebb tide is effectively slowing us right down so we're hardly making any real progress over the ground.
Having a nice ready-made meal of 'smoky chicken and chorizo' - managed to heat it up by placing its pouch into water brought slowly to the boil.

11pm We're going backwards - having a major problem with the ebb tide - it's stronger than our boat speed with almost no wind - so it's carrying us with it. Heading as we were, SE, we ended up being taken just S of due W - basically getting closer to rocks off the shore near Neah Bay.

In order to keep away from shore, I had to gybe around and head almost NNE, resulting in being taken NW by the tide - a safe direction, although it meant we were into slightly stronger tide and were also crossing the shipping lanes - fortunately, at this time of night, with very little traffic. Means we're being taken further from Victoria - but we're staying safe for the time being, in the middle of the Strait.

I'm wondering if I'm going to be forced back out to sea, to wait for a stronger wind to get down the Strait and to Victoria in safety. It's a pity the ebb tide is so much stronger than the flood tide which would help us to sail E - the direction we want to go in. The tide is still increasing in strength with maximum ebb, nearly 2kt, being around 1a.m.

Thursday 12:15am PDT (Thurs 0715 GMT) The nightmare continues ...! Ironically, I had a call from BBC Radio Solent, to join Juliaan Clegg's Breakfast Show in the UK. I was able to share my present scenario - and also to point out that, in fact, I'd now crossed my outbound path around the world - so I've 'closed the loop' and effectively completed my nonstop sail around the globe... but I still need to get back to Victoria and that's posing the present problem/challenge caused by the strong tide and present lack of wind in the Strait of Juan de Fuca.
We're now making a SOG of well over 2kt, sometimes 3kt, heading W-NW - but it's all due to tide and none due to wind - since there is none!

2:30am Now beyond the yellow light marking the 'bend' in the TSS at the entrance to the Strait. We've been taken 7.7ml by the ebb tide since soon after 10pm - back out of the Strait, just past Cape Flattery, avoiding quite a few ships on the way.

7am Just enjoyed a beautiful dawn over Vancouver Island and excited to see a humpback whale cruise by - dorsal fin shape was quite different from the whale seen the other day. Prince Rupert Traffic were excellent in helping me to stay safe while drifting with the current in no wind among the many ships heading in and out of the Strait overnight and now - many thanks to them for that. We were effectively becalmed but managed to stay in the middle of the shipping lanes, out of harm's way, for a large proportion of the time overnight.

11:30am 'Celebrity Solstice' passes by, 1/2 mile off, on her way back from a cruise to Alaska. We've just reached the end of the shipping lanes outside the Strait entrance, there's a touch of SW wind and we're heading NW at around 3kt, to get a bit further away before heaving to, to await better winds to allow us to reach Victoria.
Vancouver Island and Washington's Olympic mountains are in good view.

ETA: Friday afternoon, maybe?? Have to wait now for better wind to try again. If good W-NW wind Friday, that would be helpful and that might happen, according to forecasts, but light winds or E winds are of no use for getting E against strong ebb tides. (The weather gods seem to have decided to send their usual light winds into the Strait to slow us down...) 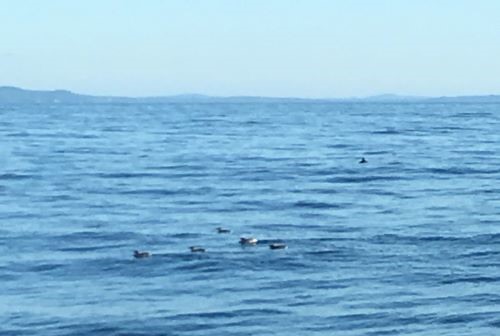 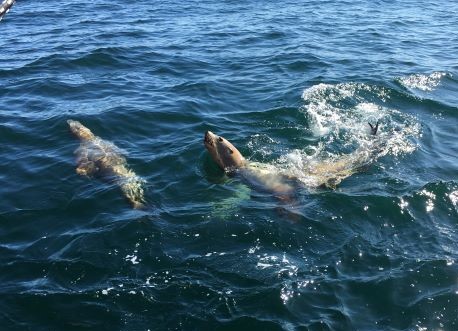 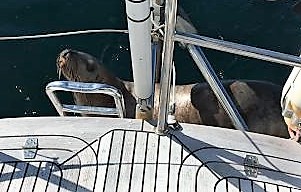 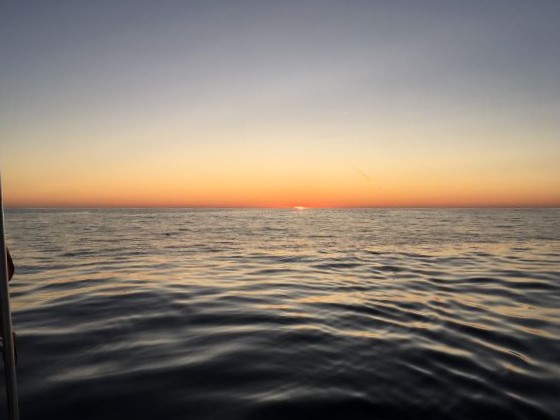 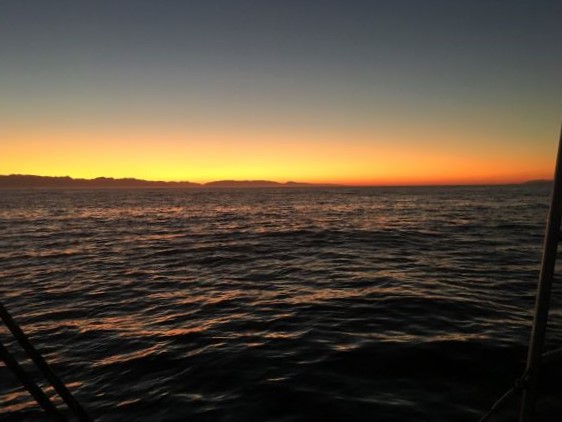